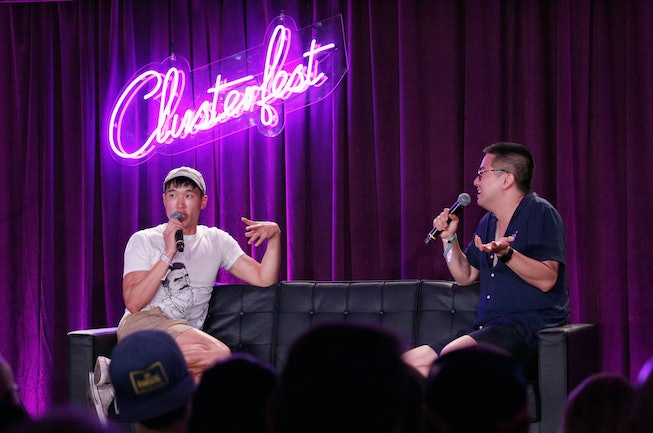 We’re approximately 365 days out from the next Pride Month, but don’t fret: Bowen Yang and Joel Kim Booster are set to star in “Fire Island,” a romantic comedy that takes place over the weeklong vacation to the famed LGBTQ+ getaway spot on the coast of Long Island.

The film, which was written by Booster, is billed as a modern take on Pride and Prejudice — love triangles and subtle, flirty elbow grazes, galore! According to Variety, Yang and Booster embark on a vacation “with the help of cheap rosé and a cadre of eclectic friends.” Fun!

Booster, who’s had roles in Shrill, Search Party, and Big Mouth, shared the news on his Instagram, noting that the project was originally in talks for Quibi, the short-lived video platform that shut down in December 2020, just eight months after its launch.

“Having some trouble stringing together a sentence today but needless to say this is a pretty big deal for me. Topping? With @fayedunaway? While @andrewahnfilms directs? Groundbreaking stuff,” he wrote. “But seriously I’ve been trying to get this sh*t made for two years and I’m eternally grateful to Searchlight and Hulu for rescuing us from the Quibi shipwreck. I’m making a f*cking movie, y’all!”

The news comes just before Fourth of July Weekend, which Variety notes marks the 45th anniversary of The Invasion, where drag queens stormed the beach in boats after a customer in drag was denied entrance to a restaurant.

Despite the historic importance and current popularity of Fire Island, there doesn’t appear to be any major films about it yet, though there is a reality show on Logo called Fire Island, produced by Kelly Ripa and Mark Consuelos, where six gay men live together in a beach house for the summer. Chaotic!

Queer director Andrew Ahn, who directed the drama and 2016 Sundance selection “Spa Night,” will direct. The project will start shooting in August in New York City and on Fire Island, during the beach’s busiest season, so keep a look out for Yang and Booster running around with some rosé. The film will be released on Hulu.