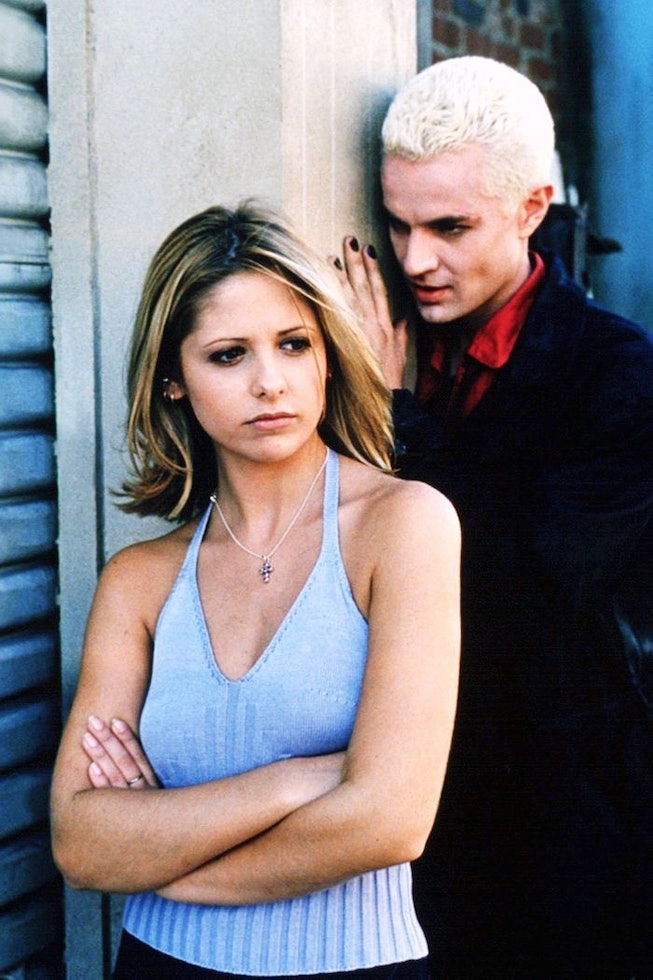 If the planets and asteroids of your birth chart are all Greek to you, fear not: The greatest mythology of the new millennium has enough archetypal firepower to make sense of our solar system, and in leather pants, no less! Over 12 seasons, the dual sagas of Buffy the Vampire Slayer and Angel reckoned with destiny, disillusionment, redemption, and resurrection — the stuff that makes any good astrology reading worthwhile. Here’s our guide to the big players in your chart, told through the one and only Slayer epic.

An invisible world, which comes alive at night. A calling from within. A job only a woman can do. Welcome to the Hellmouth, and to the domain of the moon, where, beyond the obvious light of the sun, and the world of men, sh*t really goes down. The moon acts as the eternal mother, retaining our history, and the emotional truths which cannot be easily compartmentalized in a patriarchal world. Reckoning with the living vagina dentata of the Hellmouth, the new Slayer must engage in an unseen work, as a force of nature, an answer to the abstract made literal. Though she longs for a life in the sun, Buffy finds herself called below, where the emotions — and the passions — run deeper.

Is anything more deadly in Sunnydale than an open heart? Venus shines her rays on the Hellmouth in Season 2, bringing light, love and romance onto just about every character in town: Buffy and Angel, Spike and Drusilla, Willow and Oz, Xander and Cordelia, and Giles and Jenny Calendar. In your chart, Venus speaks not only to your love language, but to your own feminine powers: receptivity, compassion, and vulnerability. Buffy and Giles give in to the call of Aphrodite, and pay dearly. Angel’s heel turn from lover to violator and his ensuing murder of Ms. Calendar would change Buffy, and the series, and the history of television, forever. “Love is pain,” the First Slayer would one day teach Buffy, “and the Slayer forges strength from pain.” What a way to learn.

Here comes Faith, Buffy’s all-time greatest foil, who exposes Buffy’s every shadow to bring her into further definition. In Faith’s rage, rejection and retribution, we experience the power of Lilith, the primeval she-demon, exile, and female pariah. In biblical mythology, Lilith was Adam’s first wife, banished from paradise for demanding parity, cast off to represent the hypocrisy of the dominant social order. In astrology, Lilith represents the moon’s furthest point from orbiting the earth — its deepest plunge into the void — and speaks to any history of gaslighting, rejection, sublimation, or gendered bullsh*t. She cannot be tamed, silenced, or subdued. By the close of Buffy the Vampire Slayer, the two Slayers understand their essential duality. But in her first exile from Sunnydale’s Eden, Faith won’t go down without making some noise.

Moving to Los Angeles and declaring himself a champion of the innocent, Angel begins a metaphorical journey of sobriety, one which would define his series until the end. Over the first season, Angel is tempted by magical fix-alls — to walk in the sunlight and even be with Buffy forevermore. But, honoring the presence of Saturn, planet of rules, restriction, and responsibility, Angel sacrifices his chances at happiness for his duties to the world. Answering now to the Powers That Be, he is held to standard by a higher authority. For the immortal Angel, the god of time rules all; and for Cordelia and Faith, lessons about growing up and accepting change come with great pain, and even greater sacrifice.

The planet of change acts in your chart as a liberator or chaotician, depending on how tightly you’re gripping the wheel. But let go of the status quo, and Uranus will awaken you to greater possibilities of consciousness. Buffy’s transition season sets the stage for future evolutions; Willow deepens her relationship to magic (and to Tara); and Spike begins the shift from villain to something... grayer. Season 4 blurs the boundaries of selfhood: Buffy switches bodies with Faith, fuses consciousness with the Scoobies, and faces the First Slayer in a dream. The characters have been broken out of their old roles, and are now ready for the psychedelic changes the next three seasons will bring.

The god of war lords over your individuality, ambition, and sexual power. Mars launches you out into the world, but when unchecked, the fiery planet can prop up the ego in rage, ruthlessness and revenge. When challenged, Mars sees everyone as an enemy. In Season 2, Angel embarks on a one-man war against the satanic law firm Wolfram & Hart, alienating his friends and compromising his soul in the process. The reemergence of Angel’s first love, Darla, initiates a dark spiral into sexual obsession and manipulation. But by season’s end, Angel has reconciled with his baser drives, and realized the limits of his Martian mission: He’s nothing without people.

The biggest planet in the solar system brings with it light, power, wisdom, and abundance, synthesizing your life experiences into inhabited knowledge. In the show’s most audacious season yet, Buffy looks to past Slayers to master her craft, while Willow increases her talents to dangerous new levels. By the epic finale, Buffy has become the very best Slayer she can be. But with abundance comes excess, and no villain greater symbolizes extra than Glory, a force of chaos too powerful, too hungry, and too manic to be contained. Wherever Jupiter moves in your chart, expect great expansion; but be wary of going too big, too fast. Buffy’s fifth season changed the stakes of the show’s reality, but as the Chosen One would learn, great leaps forward invite a harder fall. Sometimes the price is just as great as the reward.

The planet of communication works overtime (and likely goes retrograde) in Angel’s high Shakespearean season. Every catastrophe comes down to the trickster planet’s go-to move: miscommunication. Wesley stakes his life on a false prophecy; Connor exacts vengeance on the wrong father; Angel misses his chance to declare his love for Cordelia. Mercury acts as the intermediary between our soul’s desires and the exterior world around us; in failing to convince others that he has changed for good, Angel meets his greatest grief. Meanwhile, Cordelia — never one to mince words — rises in her role as messenger of the Powers That Be. By season’s end, she has become Mercury incarnate, a golden bridge to the divine, no longer fit to slum it in a world of lies and mistruths. Say what you mean, and you might go to paradise!

From the bliss of heaven, to the hell of being alive. For Buffy, Spike, Anya, and Willow, Season 6 is an escalating chase of highs and an escape from the pain of dealing. What’s on the other side of the rainbow is governed by Neptune, the planet of the collective consciousness, ruler of dreams, imagination, and, of course, intoxication. “Everything here is hard, and bright, and violent,” Buffy admits to Spike, suddenly the only person in Sunnydale who knows what it’s like to be exiled from godhood. “Just getting through the next moment, and the one after that... knowing what I’ve lost.” Seeking annihilation in each other, Buffy and Spike would embrace a Neptunian ride, full of violent highs and bitter lows. By the season finale, every character has been wrecked by their addictions and brought down to earth —Buffy and Dawn, quite literally — where the true healing can begin.

Known also as Demeter, the goddess of the harvest, Ceres lost her daughter Persephone to Pluto, god of the underworld. Grieving her daughter’s rape and imprisonment, Demeter halted the bloom of all life on earth, until the gods struck a deal: Persephone would remain below for six months (winter), and return to her mother for the rest of the year (summer). Wherever the asteroid Ceres falls in your chart come questions of motherhood: nourishment, connection, scarcity, and boundaries. Themes of corrupted motherhood dominate all of Joss Whedon’s work, but they reach operatic heights in Angel’s best and most controversial season. Cordelia, violated like Persephone, plays host to an apocalyptic mother-destroyer, whose Scientological form of love corrupts all. Ceres calls for balance, and compromise, and in the face of his greatest threats, Angel must make the hardest sacrifices.

It ends as it begins, with a girl at the mouth of hell. The placement of Pluto in your chart forces a descent into your own underworld, and, if you survive it, a reclamation of power. With the death of self comes metamorphosis, as that which Pluto destroys is remade anew. The villains of Buffy’s final season are pure archetypes: Evil (The First), Ancient (Turok-Han), Misogynist (Caleb), forcing the Slayer to redefine her purpose once and for all. Every core tenet of the series is at stake, down to the origin and legacy of Slayerdom. Only by willingly entering the Hellmouth and welcoming total reinvention, can Buffy pull off her greatest heroic labor — and change the mythology forever.

Now running the evil law firm Wolfram & Hart, Angel emerges from the shadows and embraces a new life in the light — with vampire-protective windows! The sun feeds life, and its placement in your chart enhances your visibility, radiance, and vitality. Now acting as a public hero, Angel attempts to make a difference on a quantum level: When your deeds are seen, what change can they inspire? And, with Spike now hanging around, the prophecy of a vampire with a soul regaining his humanity looms larger than ever: Could one of our redeemed bloodsuckers really walk in the light one day? The sun never goes out, and for Angel, the work never ends. All a champion has are his deeds, and his legacy.