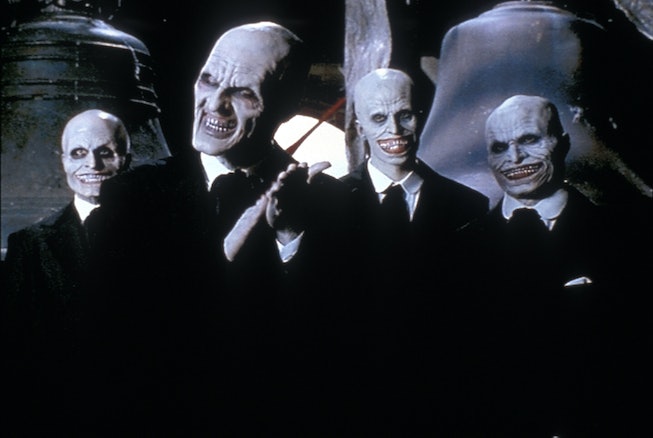 In the mood for a scary movie with self-awareness? Start your marathon in Sunnydale, a sleepy hamlet where the final girls fight back and the undead could model for Jean Paul Gaultier. Over 12 combined seasons, Buffy the Vampire Slayer and its spinoff Angel melded a cultural sensibility into their compact horror stories, producing an indelible mythos full of heartbreak, humor and genre subversion. But when Buffy made human trauma into the stuff of the Hellmouth, the stakes felt real, and the scares went deep. Buffy's writers made their monsters from metaphors, often forcing the champions to face their darkest shadows in duels to the death.

Though the unending hordes of demons could get pretty nasty, the greatest scares on Buffy and Angel came through relationships. What happens when the one you love becomes a monster? No character was safe from the seduction and corruption of power, soul or not. What's scarier than a world of compromised ethics? Whether you're looking for an old school Halloween special, or a heel turn from your favorite local witches and Slayers, there's an episode that will leave you haunted. ​In chronological order, we run down the spookiest entries in the Sunnydale High library.

After their first time together, Buffy witnessed Angel cross to the dark side. But, this early in the show’s mythos, how bad could a big bad be? In “Passion,” a soulless Angel raises the stakes for the series’ villains, taking tips from Fatal Attraction and The Silence of the Lambs to make every member of the Scooby Gang feel targeted. Long before The Wire’s Omar Little and Game of Thrones’ Ned Stark, Buffy proved that it could and would kill the ones you loved most.

Rendered powerless on her 18th birthday, Buffy must face a serial-killer vampire, relying on nothing but her wit and her will to live. Having honed her classic final girl chops in Scream 2 and I Know What You Did Last Summer, Sarah Michelle Gellar once again proves her range, wandering the streets of Sunnydale, suddenly terrified of the men who lurk in the dark. By stripping its paragon of her Girl Power invulnerability, Buffy subverted its whole premise, and forced its main character to really prove her mettle.

By Season 4, Buffy’s writers had cracked the formula for a breezy Halloween episode. Case in point: A frat house Halloween party at which everyone’s fears manifest into reality. What’s not to love? Anya debuts her Bunny costume — “bunnies frighten me” — Buffy looks fab with pigtails, and Giles turns up with a chainsaw, all while severed heads and homicidal skeletons attack. An ideal palette-cleanser between more outright terrifying entries.

A classic episode, based on a simple premise: Who’s going to save you when you can’t scream? When the creepy, toothy Gentlemen pull an Ursula and steal the voices of all of Sunnydale, it doesn’t take long for bourgeois suburbia to fall into chaos. Amid the eviscerations and silent murders, “Hush” introduces a series of firsts into the canon, as Willow and Tara form a new bond, and Buffy screams for the first time in the show’s history.

By Season 5, Buffy’s mother Joyce became the Hellmouth’s go-to hostage, with just about every demon in town holding her ransom as a rite of passage. But on the eve of a major brain surgery, Joyce’s fate is suddenly beyond Buffy’s control, no matter if she slays the demon in time. Bedridden and delirious, Joyce falls prey to a dripping, slithering extra-terrestrial terror, and, as she loses her mind, Buffy loses her childhood, and her final vestiges of suburban safety. Employing POV shots, and catching the Summers women in a pitch-black household, this one makes everyone — especially Buffy — feel like they’ve been left in the dark.

Without its resident blonde sheriff to keep the supernatural shitshow at bay, Sunnydale goes to hell, and fast. Suddenly, small town America has lost its charm: biker demons defile the Buffybot, Willow crosses a line into black magic, and the Slayer, freshly resurrected, must claw her way out of her coffin. On a new network, in a new millenium, in the weeks following 9/11, Buffy would face a bleak and uncertain world. What if staking the bad guys at the end of the episode can’t fix anything?

A perfect allegory for a Girl Power show enduring the gaslight of Bush-era misogyny, this devastating stand-alone episode tosses Buffy into an asylum, forcing the Slayer to question if her superhero exploits were all delusions. With “Normal Again,” no one was safe: Not Buffy’s friends and families, who would have to be killed to “sever the fantasy,” or the show’s fans, who would have to question the limits of their escapism. It all ends with a confrontation in the basement, and a lingering doubt left in Buffy. Could she ever be trusted again?

From the moment Warren’s stray bullet hits Tara, all bets are off. Even Angelus and Faith would be gagged by the awakening of Dark Willow, a heel turn that unleashed six seasons of repressed fury in an apocalyptic blaze. “The magic’s too strong. There’s no coming back from them,” Xander warns Willow, when she first lets her black roots down. “I’m not coming back.” Flaying Warren alive, and nearly killing Dawn and Giles — the show’s last remaining angels — Willow indeed crosses far beyond any villain before her. By the time she and Buffy face off, it’s not clear who to root for, and what’s even left to save.

Season 7 introduces some of the saga’s most frightening villains, including the Terminator-level übervamp, the woman-hating preacher Caleb, and Ashanti as...a cat lady. But for sheer visceral ick factor, nobody tops Gnarl, a cannibal demon who takes a liking for Willow’s raw midriff. Sure, flaying was de rigueur on Buffy, but Gnarl’s fang-toothed glee still manages to make our skin crawl.

At the end of its most epic season, Angel delivers the apocalypse Los Angeles deserves, in the form of a pop-messiah called Jasmine (Gina Torres), who makes acolytes out of anyone she sees. Parodying Scientology and celebrity culture, Angel unleashes the Buffyverse’s greatest-ever big bad, trading doom and violence for a veneer of communal salvation. With the entire cast under Jasmine’s spell, Fred (Amy Acker) must survive her own 70s paranoia thriller, hiding out in a cultish city of dupes, with no way out but sacrilege.

When a deranged Slayer goes on the loose, reenacting the horrors of her own trauma, the vampires are suddenly the victims. “Damage” flips the script of the entire mythology, making the superhero into a monster and rendering the demons defenseless. After killing two Slayers and falling in love with another, has Spike’s luck finally run out?