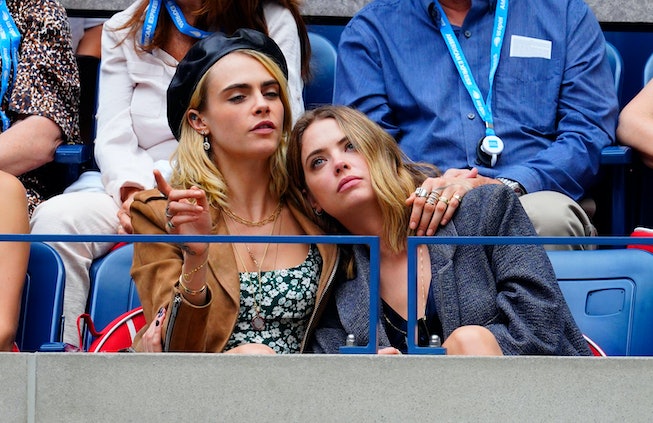 After almost two years of dating, Cara Delevingne and Ashley Benson have reportedly broken up, People reports. The pair, who were first spotted publicly together sharing a kiss in August 2018, reportedly split at the beginning of April, a source with People alleges.

According to the source, the relationship is "over." The source goes on to allege, "Cara and Ashley always had their ups and down before but it's over now. Their relationship just ran its course.”

Weeks before their reported split, Delevingne made a cameo in Benson's TikTok video, and it was reported that the two were quarantining with Kaia Gerber, Margaret Qualley, and Tommy Dorfman. It's unclear whether the group of friends and the alleged former couple are still social distancing together, but both Benson and Delevingne have remained active on social media in the weeks following the reported split.

The two had kept much of their relationship out of the public eye until June 2019, People notes. It was then that Delevingne confirmed the reported romance, sharing an Instagram image of her sharing a kiss with Benson. "I don't know because it is Pride, it's been 50 years since Stonewall happened and I don't know. It's been just about our one year anniversary so, why not?," she said of her reasoning for sharing the snap.

People had reportedly reached out to representatives for Benson and Delevingne to confirm the reported split. As of May 5, neither Benson nor Delevingne had made any public comment.