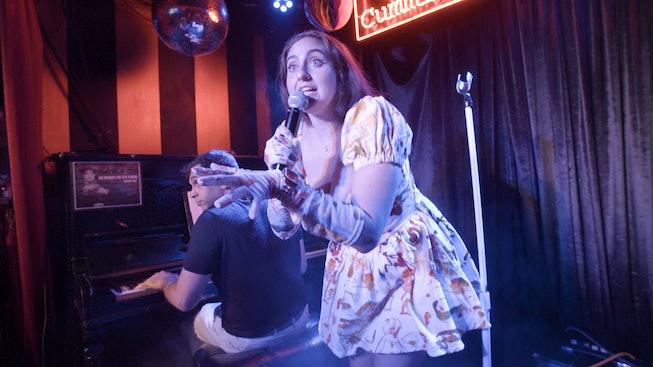 NYLON’S INSIDE JOKE offers an intimate look at your favorite comedians as they workshop new material at home and on stage.

Catherine Cohen is a diva chanteuse for our times — best known for singing hilarious, sweeping ballads and ditties about her dating life, anxieties, and bodily functions, dusting some glitter on it all. Inspired by Broadway and comic legends like Bette Midler, Bernadette Peters, and of course, Mollie Shannon’s character in the seminal 1999 comedy Superstar, Cohen finds herself firmly in the middle of the two dichotomies: “I think marrying the glamour of the Broadway stage and the depravity of human existence is what’s interesting to me.”

Now, with The Twist...? She’s Gorgeous out on the streaming giant, it’s time for Cohen to workshop some new material, a process though which she led NYLON. Always a master at finding the levity in darkness, one of her latest original songs is inspired by the grim topic of the Supreme Court’s overturn of Roe v. Wade.

“I know there are things that might help me heal/ but when I see a Pilates machine I feel,” she strums on her couch, singing with a feather touch of vibrato. “Like it’s medieval torture device.”

Watch NYLON’s Inside Joke With Catherine Cohen in full, below.