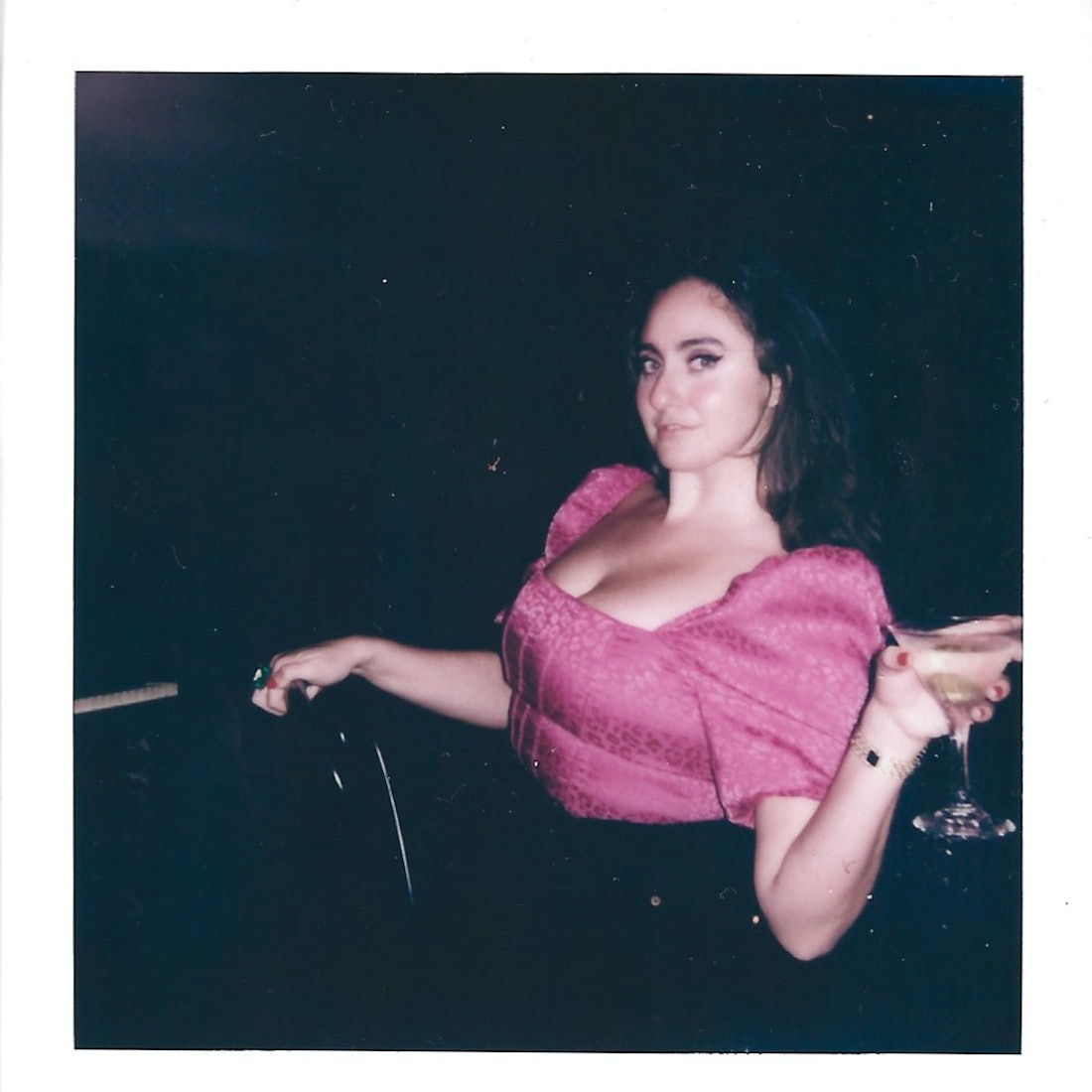 A Night Out With Catherine Cohen

A Night Out With

Catherine Cohen brings the freewheeling glamour of her acclaimed cabaret show 'The Twist...? She's Gorgeous' to the screen.

One of Catherine Cohen’s longtime dreams is finally coming true: She’s able to say she’s jet-lagged in an interview. After a string of performances in London, she’s now at Ladybird, the crowded and velvety East Village vegan tapas restaurant she chose because she loves the metallic wallpaper in the bathroom. “Isn’t it a dream?” she asks our waiter, who nods in agreement; it’s also the type of place where the waiter warns us not to eat the heart-shaped cocktail pick that comes with our drinks because others before us have tried and failed. “Don't try and stop me,” teases Cohen.

“Classic thing not to do, but for a split second saw some of the YouTube comments on the trailer. I was almost frustrated with myself for even being susceptible to that kind of thing. But at the end of the day I'm just a girl, no doubt, Gwen Stefani,” she says. “I think it's f*cking brilliant, and if somebody doesn't like it, they probably have bad taste.” She then leans over my iPhone recording our conversation and gives it a command: “Put that in there.”

The Twist…? She’s Gorgeous has been a long time coming. The cabaret comedy special opens with adorable archival footage of Cohen as a toddler absolutely hamming it up for the camera. The camcorder date reads 2/4/95 as a teeny Cohen, draped in robe and a giant baby pink bow on her head, precociously says, “Well, I’m just gonna walk into the TV!” “That’s magic,” says an adult voice. “I know!” You could say Cohen was born for this gig.

Cohen is unapologetic, a girl’s girl with libido that’s only outdone by her confidence. For years, she’s been satirizing her anxieties and dating snafus into explosive songs to fling at audiences who eat it up. Groaning over the concept of boyfriend jeans when she’s never been thinner than any man she’s ever dated, the humiliation of delusional trips upstate — it’s all comedy fodder for the stage. Along with Cabernet Cabaret at Club Cumming and The Twist…? She’s Gorgeous, which she performs at the New York institution Joe’s Pub, Cohen’s early days in New York’s comedy scene also included It’s A Guy Thing, hosted alongside Patti Harrison and Mitra Jouhari of I Think You Should Leave and Three Busy Debras. The show erred on the more frenzied, experimental side of Cohen’s wheelhouse, with certifiably deranged numbers like “Nice to Me,” a song from the perspective of women who will ignore the ills of any man on the caveat that he’s, well, nice to them. “Listen up, you know I’m a girlboss!” chides Cohen in a verse, “But if I guy tells me he likes my top, you’ll be surprised / How fast I turn on all my friends / I’ll kill all of my friends if a guy says he likes my shirt.”

Onscreen, Cohen enters the stage in a hot pink explosion of rhinestones, ruffles, and bows, spending the hourlong musical journey fusing her self-aware and delightfully absurd observations with glamorous cabaret star talent. Cohen’s stage persona is an exaggerated version of herself — a gal about town with a vaguely trans-Atlantic lilt who wants it all. “If this gets too tall,” she says, clutching a microphone stand, “I will try to f*ck it.”

The other twist — besides being gorgeous — is that Cohen is not just any comedian belting out songs. The girl, hand on my heart, can really sing. Of course, she knows this better than anyone; she corroborates this early in the special: “Oh, my God…” she says, bemused, after wrapping a song. “I have an amazing voice.”

The Twist…? She’s Gorgeous, a title that originated from a 2015 tweet as a testament to her long-game creativity, includes songs Cohen wrote alongside music from her longtime collaborator and pianist Henry Koperski, some dating as far back as 2016. There’s her origin story (“Boys never wanted to kiss me / So now I do comedy”); her thoughts on marathons (“What are you running from?”); and, of course, an anthem for anyone looking for love (“I’m not looking for that special guy / I’m not trying to find my Mr. Right / I just want someone in my bed every night / Who doesn’t care if I live or die”).

Cohen doesn’t reserve glamour just for the stage, although tonight she’s a little more low key, wearing black jeans, her signature jet black cat eyeliner, and a cropped puff-sleeve leopard print satin fuchsia top. She’s still the girl who wants it all, but over the past two years, she’s also learned how to let go in the process. “I hate to grow, I hate to learn. I hate when something's character-building; it's hell,” she says. “But I do feel wiser in my old age of 30-and-a-half.”

After coming away with the coveted Best Newcomer Award at the 2019 Edinburgh Fringe Festival, Cohen had originally planned to tape The Twist…? She’s Gorgeous in 2020, plans which were derailed over safety concerns and rescheduled to last September. Once the date was locked in, Cohen did what needed to be done: buckled down and lived like a nun. “I was a sociopath. I mean, first of all, I hadn't performed in a hundred years. I think I had an old recording of a show I did in Edinburgh. I'd listen to it, and it was like, who is that b*tch?” she recounts. “I literally quarantined for a month in my apartment here before we shot. I got this little Apple Watch, and I would just walk with two masks listening to true crime, losing my mind. And I was like, ‘I'm not going to drink; I'm not doing anything,’ just, full nun. But I kind of got high off it.”

Cohen is far from twiddling her thumbs awaiting her special’s release into the world. Last year, she released the book God I Feel Modern Tonight: Poems From a Gal About Town, starred in Jonah Feingold’s film Dating & New York, and just wrapped production of his forthcoming rom-com At Midnight. She’s also tapped into the metaphysical, keeping tabs on celestial bodies and whatever trickery they are privy to pull. “I was like, ‘What the hell is going on with the moon right now?’” she’d ask her astrologer and friend, NYLON’s own David Odyssey. “And he's like, ‘Honestly? A lot.’”

“I hate to grow, I hate to learn. I hate when something's character-building; it's hell. But I do feel wiser in my old age of 30-and-a-half.”

When Cohen enters a packed Club Cumming, patrons slowly steal covert glances, whispering and giggling amongst themselves. It’s the side effects of star power, like they can’t believe their luck. If Cohen clocks this, she doesn’t show it; instead she warmly introduces me to her younger brother, who looks like her twin and lives next door to her in the West Village, and her silver-haired father, who just flew in from Houston. She asks if I’m mad at her and apologizes as she dips away to quickly practice with her pianist; they haven’t worked together much before tonight, and she wants everything to go right. As Cohen hovers over the piano to dictate the musical cues, I can see her disciplined side come out for a spin. This is her art, and she’s taking no prisoners.

Cohen wraps up the evening with a song about musings that make her wonder, “What am I? The girl version of Freud?” a song about the dark, bottomless void. If she has it all, she asks, then what is the deal with this incredibly annoying emptiness she’s feeling? Cohen sings about all the things that fill the void, including but not limited to: lots of melted cheese-based products, gin and tonics, and sex with people who say “howdy!” The hedonism and vices are good for a laugh, but the truth of the song is obvious to me: As long as there’s a stage and an adoring audience, Cohen’s void will always be kept at bay. And based on tonight, she’s got nothing to worry about.