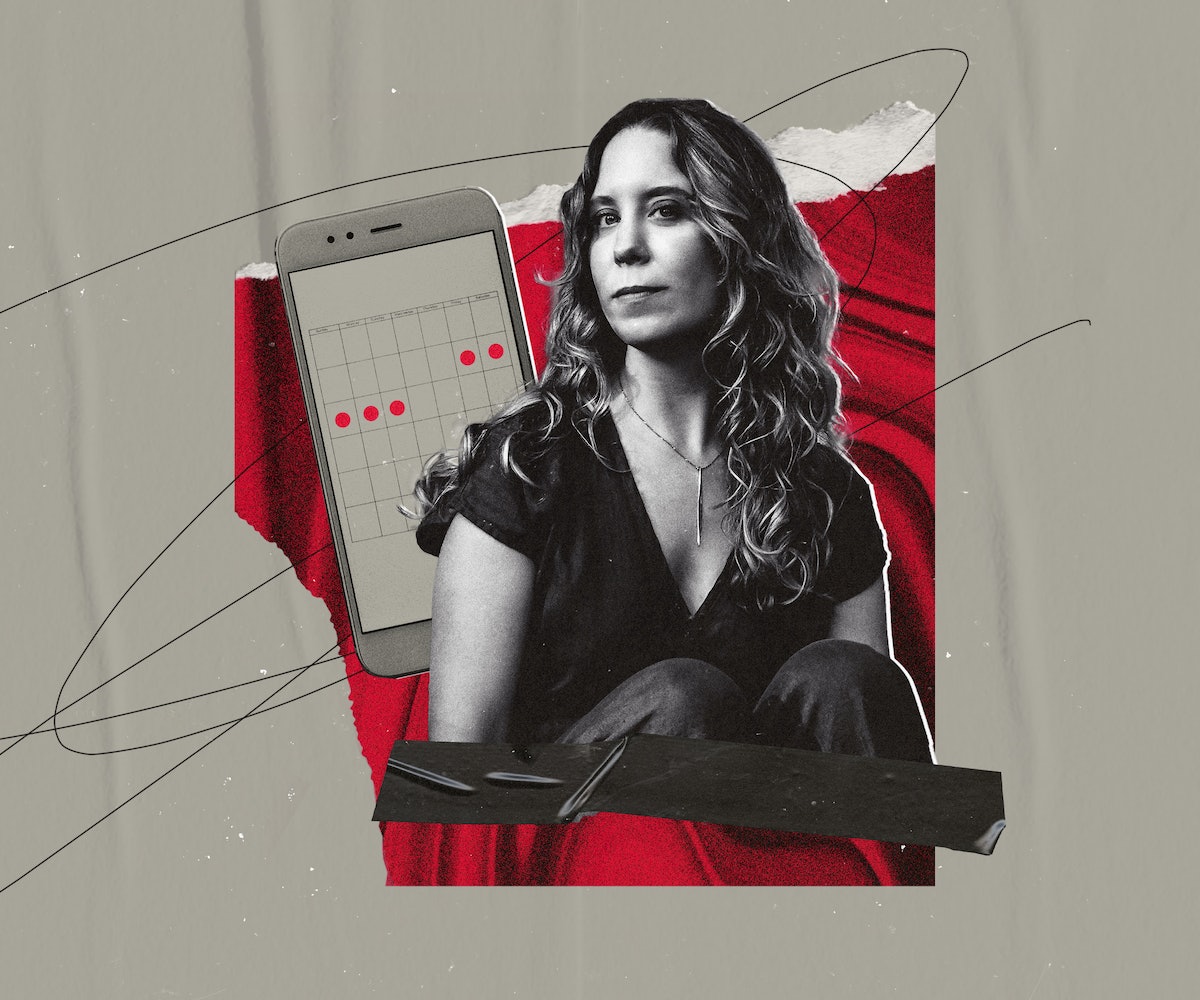 The other day I had a pop-up on my period app, FLO, telling me it was having a Black Friday sale. I automatically clicked the "X" on the top right corner (as I do on all pop-ups, always). The "X" was gone, but now there were three typing dots in the bottom right corner, friendly seeming, asking me if I'd had any period symptoms today. On one hand, all of the pink attention made me feel cared for. But on the other flip of the coin, I felt like I was being taken advantage of.

Period apps are a booming and growing market. Where there used to be just half a dozen choices, there are over 200 apps available, and "Femtech" is supposed to be worth $50 billion by as soon as 2025. Some apps like Clue and Flo even promise to help diagnose disorders such as polycystic ovarian syndrome.

In my early 30s, my PMS went from the expected range of symptoms, like irritability and craving a black-and-white cookie, to severe and dictating my life. My romantic partnership was incredible — except for one week a month when it was a nightmare from hell, and I experienced red smoke coming out of my ears. Not in the sitcom-PMS kind of way we've learned about through Cathy comics and Clueless, but in the smash-a-bowl-of-homemade-soup-against-the-wall-and-alienate-those-you-love kind of way.

Being a writer, I began researching and scouring the internet and was able to diagnose myself with premenstrual dysphoric disorder, something 1 in 8 women experience. PMDD is severe PMS, filled with super fun symptoms like paranoia, rage, and, like the name suggests, dysphoria. A huge part of that was having to pay attention to my cycle. I'd always scoffed at period apps — they seemed cheesy, too pink — but I needed to track my period if I wanted to keep my relationships and mental health intact.

This was 2017, when there were fewer apps, and I began using Hormonology because I liked the name, and it had been created by a woman. For a while, it helped. I could see when my period was approaching, and began to recognize the days I felt terrible (20, 26, 27) and the days I thrived (6, 7, and 10). When I look back at the app now, I see I wrote ominous shorthand in the notes. I wrote an entire book on PMS instead.

But then it wanted me to upgrade. Each app, I noticed, wanted me to pay money to pay attention to my period. Originally, Hormonology had been free, but suddenly it was called Hormonology Lite, and to continue tracking in the way I was, I'd need Hormone Horoscope Pro. Though the apps were detailed and seemingly thoughtful (one even had you choose from seven different types of discharge, including "green" and "cottage cheese"), they felt too small for what I was going through. PMDD wasn't cute or containable, the way the apps wanted it to be. It was unwieldy, dominating, messy. There was nothing more infuriating than having a PMDD episode, feeling visceral hate, sobbing all day, throwing sh*t, only to open the app and have a cutesy font pop up asking, “Did you notice any PMS symptoms today?”

Over time, I began recognizing my patterns and symptoms holistically. Aching back and hips meant it was three days away. A vision (or fantasy?) of throwing something meant I was two days away. Yearning to watch comfort movies like Ladybird and Frances Ha meant I was getting close. Devouring nachos and red wine usually meant I would bleed in the morning. It began feeling creepy to have to open my phone to check on my period — and to have a bot typing to me, asking if I felt any period symptoms. There wasn't enough nuance on the period apps, and often they were plain wrong about the days I'd be horny, happy, or in a hellscape. My body was always changing; the app, on the other hand, always stayed the same. To see the patterns in how my period affected my life and relationships, I began writing a book, The Red Zone: A Love Story. I needed a larger medium than a cellphone to study my relationship to my cycle.

There was nothing more infuriating than having a PMDD episode, feeling visceral hate, sobbing all day, throwing sh*t, only to open the app and have a cutesy font pop up asking, “Did you notice any PMS symptoms today?”

When you're in the midst of a PMDD episode, having visions of smashing glass windows, it is not an app you go to for comfort or soothing. What do you do then? The opposite of looking at your phone. Nature, walking, and exercise are the biggest antidotes to PMDD. A low dose of medication. Sunlight. Meditation. The internet does help: In my case, it was the r/PMDD group. The difference is, on Reddit, there is community; on a period app, you're still alone. (Well, aside from the bots.)

I see how the apps can be helpful, of course. Some doctors want you to track your period and symptoms for three months before diagnosing you with PMDD, and with the apps you could show up at your (possibly skeptical) doctor with diligent notes and tracking to provide (though you can do that with a pen and paper, too). Depending on how you use the apps, they can help you advocate for yourself.

But I keep thinking the apps remind me of how, instead of simply walking out of our doors or looking out the window to "check the weather," we stare downwards, away from the sky, at a phone app. With the depressing announcement of Meta, I can't help but think this is our future; talking to a virtual bot about menstrual diarrhea instead of our friends.

Though the period app was helpful for a specific time in my life, it was more helpful getting to know my body. Did I really need to stare at my phone to know I had cramps? Or that the headache I was feeling was a sign? Could I just use an old-fashioned calendar and a journal rather than the "notes" section on the app? Could I read a book about the menstrual cycle, instead? (Great thing about books: they don't have pop-ups while you read.) These days, I glance at my period app occasionally, saying, hey old friend, but it doesn’t dictate what my body is doing. My body gets to dictate what my body is doing.

A friend recently said, “I was just telling someone how stupid my period app makes me feel and tracking my cycle with the literal moon cycle has been more accurate.”

Maybe period apps aren't friend or foe — maybe they're my frenemy. I stand by this, though: looking inward instead of outward could be useful for everyone with a period. And the best part about looking inward? It costs nothing.