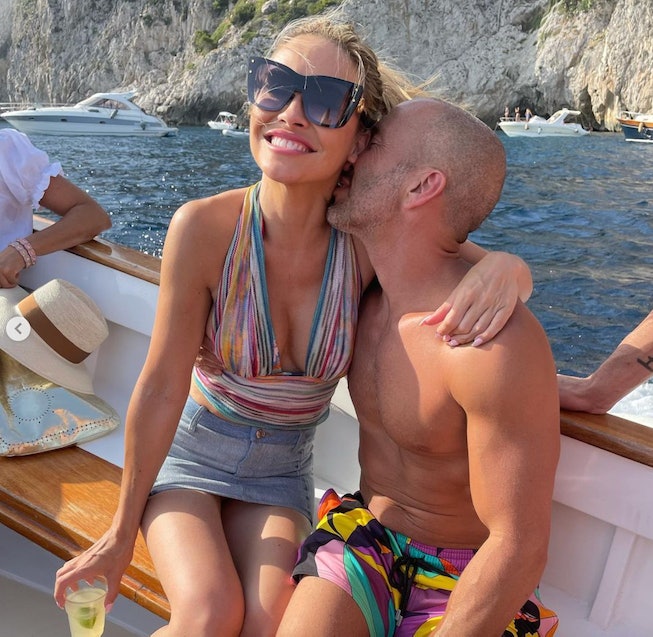 Selling Sunset star Chrishell Stause has had a bumpy road in love ever since she came into the public eye through selling luxury real estate to the wealthy denizens of the San Fernando Valley. Stause alleged that her former husband, actor Justin Hartley, announced his intentions to file for divorce via text; following an eighth-place championship on Dancing With The Stars, Stause dated and split from her co-star Keo Motsepe, declaring that she was “off of men” for a year back in March. Like teenage poet laureate Olivia Rodrigo says, “God, it’s brutal out here!”

But things are looking up for Stause, as evidenced by a recent Instagram post with her Selling Sunset family. The gang’s all together soaking up the Amalfi coast sunshine, living la dolce vita, enjoying a boat ride off the island of Capri. Stause captioned the photo carousel as “The JLo Effect,” which is confusing right until the end. The “JLo Effect” in question has nothing to do with the pop star’s obsession with a glossy, nude lip or her prolific acting career. The “JLo Effect” Stause is referring to is the singer’s boyfriend reveal (Ben Affleck, for those comfortably living under a rock) hidden at the end of her birthday post on July 25.

Stause has a boyfriend reveal of her own, and it’s none other than her real estate broker boss, noted short king and founder of The Oppenheim Group, Jason Oppenheim. The Selling Sunset community has been reeling at the news, especially given that we’ve been deprived of what is sure to be a stunning and incredibly messy fourth season for so long now.

"Chrishell and I became close friends and it has developed into an amazing relationship," he said. "I care about her deeply and we are very happy together."

Selling Sunset was recently nominated for an Emmy, but this, dear reader, is the type of coupling reality show producers fantasize about happening every day. Oppenheim previously dated Mary Fitzgerald, but now that she’s married, it’s time to focus on a new employee and whether she is or isn’t receiving preferential treatment from her boss. Season four began filming in May, and we will be waiting with bated breath until it hits the streaming giant.