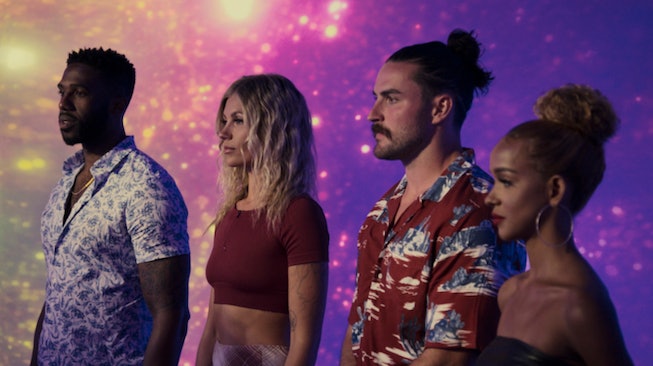 We’ve been trying to find love on TV since 1965 with the The Dating Game, and though producers have thought about basically every other deranged dating show concept, not once have we thought to consult the very stars above us. Now, a new dating show uses the cosmos’ very own compatibility test to match singles desperate for connection. Cosmic Love, which premieres on Prime Video next month, guides four singles (each with an astrological sign making up the four elements of fire, water, earth, and air) to finding true love...or lust.

This isn’t The Bachelor and nobody needs to get engaged, though, according to the trailer, it looks like someone might. The contestants are guided by the show’s resident astrologers and celebrity matchmakers, Ophira and Tali Edut, also known as the AstroTwins, who have worked with Beyoncé, Emma Roberts, Alicia Keys, Karlie Kloss, and Sting. (If they’re good enough for Beyoncé, they’re good enough for reality TV.) But on Cosmic Love, the AstroTwins take the form of the Astro Chamber, a computer in the style of Too Hot To Handle, that supposedly guides the singles on their journeys, voiced by Cree Summer. “What if you didn’t need to go to the ends of the earth to find love?” the Astro Chamber asks in the trailer.

The trailer, which was released on July 27, gives a peek into the kind of detail-obsessed, one-strike-you’re-out dating show audiences love. After all, it’s far easier to blame a breakup on astrology than on innate chemistry. “He’s a water sign!” one woman laments. “As far as romantically? Eh, no.” Another woman, presumably after being scorned, says: “Don’t mess with a Leo.” “The clock is ticking,” another man says. “It’s Scorpio season.” And honestly, a reality show filmed during Scorpio season is the perfect recipe for intensity and drama.

If you’re thinking this whole astrology thing has gone too far, I would challenge any astrology naysayers to look at the unappetizing buffet of implausible ways to find love on TV, like The Ultimatum, 90 Day Fiance, F Boy Island, and tell me that they don’t think the cosmos know a little bit more about chemistry than anyone on any of these shows.

Cosmic Love premieres on Prime Video on August 12. You can watch the trailer, below.

NEXT UP
Culture
Phoebe Dynevor Will Not Return for Bridgerton Season 3
Culture
Succession Season 4 Trailer Explodes With Family Drama
Culture
The Biggest Revelations From The Price Of Glee Docuseries
Astrology
How to Use Astrology to Access Past Lives
Style + Culture, delivered straight to your inbox.