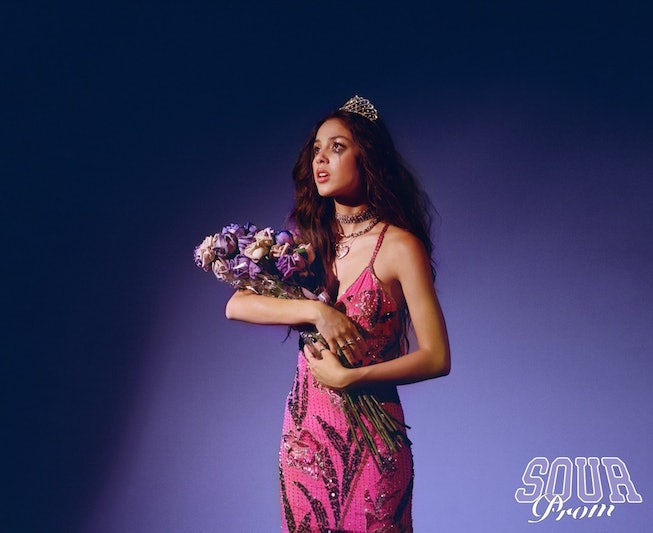 If you’ve managed to circumvent listening to Olivia Rodrigo’s debut album Sour, congratulations on a life lived peacefully under a rock. Sour has been a dominating force in music this year, and fans and critics alike have been especially charmed by Rodrigo’s blazing pop-punk tracks. Rodrigo, famously a teenager, never got to go to prom due to the whole “fame” thing, and instead opted for a Sour Prom concert film, the art for which was a homage to Hole’s seminal 1994 punk record Live Through This. Now, Hole founder and frontwoman Courtney Love wants her flowers — literally.

When Love posted Rodrigo’s image on Instagram, the tone seemed playful at first. “Spot the difference! #twinning” she wrote amongst a slew of smiling emojis. Rodrigo confirmed her fandom with a comment: “Love u and live through this sooooo much."

Love, however, had more to get off her chest. "Olivia - you're welcome,” she wrote. “My favorite florist is in Notting Hill, London! Dm me for deets! I look forward to reading your note!"

Love cleared up any confusion over the exchange on Facebook, where she accused Rodrigo of stealing Hole’s iconic cover. “Stealing an original idea and not asking permission is rude,” she wrote in comments. “There’s no way to be elegant about it. I’m not angry. It happens all the time to me.”

Rodrigo has not yet responded to Love’s request for figurative and literal flowers, and it’s not the first time that Love has been annoyed at people utilizing Hole’s legacy for their own art. The now cult classic film Jennifer’s Body (famously named after a Hole song of the same name) caught Love’s ire when she felt like its screenwriter, Diablo Cody, wasn’t giving the band the credit it was due during her interviews. “I know Diablo hasn’t mentioned Hole once, it’s really annoying as I gave her a song and a title for 10 cents! DO IT WOMYN!” she wrote in an angry tweet storm back in 2009. Ten cents? In a post-recession economy? Love may have had a point there.