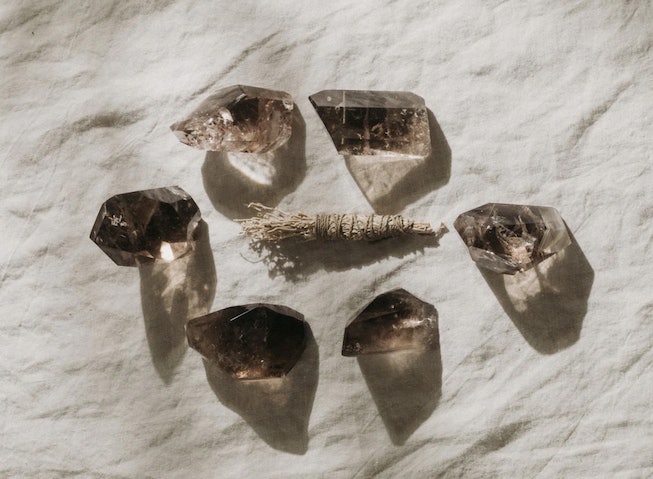 Courtesy of Child of Wild

Typically, when someone witnesses a loved one going through a hard time, they feel sad or sorry for them. What is far less common is the ability to actually feel the other person’s emotions. This is a daily experience for empaths, and it can happen with complete strangers. Being able to walk into a room and feel someone else’s anxiety, stress, or trauma as if it was their own can be a remarkable healing power, but also incredibly overwhelming and draining. That’s where protective crystals for empaths come in.

Empaths come into regular contact with other people’s energies and vibrations, according to Anjie Best, founder and owner of Peach and Pixie. “Crystals allow you to work with that energy and kind of transmute and transform it in a way that works for you,” she tells NYLON. “So as an empath, you would want a crystal that protects you from these negative emotions or energies that you could encounter, and you could use crystals as a way to block that kind of energy.” Empaths can also use certain crystals to calm, soothe, ground, and balance themselves, which is important when you’re constantly being weighed down by strong foreign emotions, according to Best. She also recommends using crystals for each chakra, “because as an empath, you want to make sure your energies are aligned,” she says.

“Empaths are sort of like an energetic sponge,” Breana Fernandez, House of Intuition crystal expert, concurs, “so they soak in the emotional, mental, and sometimes physical effects of another person that is surrounding them.” Because certain crystals are thought to provide protective energetic shields, Fernandez recommends empaths carry crystals on them at all times — whether that’s in the pockets or a purse or worn as jewelry (and kept in the home!). Below, find the best crystals for empaths to protect and claim their energy, according to the experts.

Having strong protection crystals for empaths is a must. That’s why Best recommends black tourmaline as it’s one of the best-known stones for the job. “But any of the black crystals really would be great for protection and grounding and guarding against negative energy,” she adds. Black tourmaline specifically is great for empaths because it takes in negative energy and converts it into positive energy, forming a shield against bad vibes.

Clear quartz, as Fernandez notes, is known as a “master healer.” “This crystal will not only boost intention and gives a wearer some clarity, but it also creates a protective barrier of white light around the wearer,” she tells NYLON. Like black tourmaline, clear quartz is an energy transmuter that transforms stagnant, lingering energy into positive, productive vibrations. It’s also the most programmable crystal, meaning users can set any intentions they want with it — be it protection, balance, or positivity. You can essentially just tell it what you want it to do for you.

For a boost of strength and stability, Best recommends empaths turn to smoky quartz. “[As an empath,] you're experiencing a lot,” she says, “So it's easy to feel like life's unstable or things are kind of rocky because you're experiencing other people's vibrations interfering with your own.” Aside from strength and stabilization, smoky quartz is a superhero when it comes to absorbing excess negative energy and replacing it with a calming and grounding effect. It’s helpful in boosting mental clarity while protecting you from negative thoughts, anxiety, and overstimulation — all things empaths are very familiar with.

Shungite falls in the protective black crystal category, so you already know it’s going to be useful for empaths. But Fernandez specifically points to this one for its additional ability of detoxification. “It's going to add that little extra boost of cleansing as well as protection,” she explains. “This is something that I like to recommend for empaths because empaths have a little bit of psychic or intuitive abilities,” she continues. “So I feel it's very important for them to also psychically and spiritually protect themselves, and shungite adds more protection on a spiritual level.” This unassuming stone is a powerful energy purifier and keeps harmful frequencies away from the user. In fact, some even use shungite as protection against electromagnetic fields (EMFs).

Selenite is a must-have essential crystal for everyone, but empaths especially. “Selenite is literally the crystal of love and light,” Best tells NYLON. “So if you're an empath and you're constantly coming into contact with all these other emotions, you want to just be able to feel love and light,” she continues. “You don't want to be weighed down.”

Fernandez also sings the praises of selenite for empaths. “I recommend this one because it's self-cleansing, so it can't retain any negative energies,” she explains. Empaths, with an uncontrollable ability to soak up and cleanse energies of all kinds, would greatly benefit from this crystal. In fact, every House of Intuition shop utilizes the power of selenite with mini towers set up throughout, “to ensure that our spaces stay safe and free from any negative influences,” Fernandez tells NYLON.

“Intuition is important, just to be able to focus and get your mind back on track. You'd want a crystal for that,” Best offers. Plus, intuition is highly important for empaths in general, and they’ll want to be able to separate theirs from any emotions coming from others. “So I'd say amethyst,” Best suggests, “although sodalite is also a good one, so any purple or blue crystal [for intuition].” Amethyst is also known as an aura-cleansing crystal that can aid in flushing away negativity. As Best puts it, amethyst can pretty much do anything.

Fluorite is known as an extremely healing and protective crystal. “If you want to balance your energy more, fluorite is a good crystal for that,” Best offers. It’s useful in detoxifying the mind and body of negative emotions, energy, and stress, and it helps bring in overall balance and stabilization. Fluorite is an empath’s henchman: It filters out negativity and prevents you from absorbing it by soaking it all up for you — which is exactly the kind of energy an empath needs.

Citrine is commonly regarded as the Lucky Merchant’s Stone and has something of a cult following in the manifestation community. But as it resonates with the solar plexus chakra (the body’s energy center of personal power), it’s a helpful tool for empaths to keep on hand.

“Citrine [is] for your personal will and manifesting whatever you want to manifest,” Best tells NYLON. This could be for the empath themself or for someone whose energy they’ve felt. “Say you meet somebody and you want to be able to help them after you encountered them and got to know their story. You could use citrine to set a goal to manifest the way to help them,” Best explains.

As a solar plexus stone, citrine will also help empaths boost their inner strength, confidence, positivity, and joy. Plus, it aids in discharging harmful energy blocks that might be causing stress or anxiety.

Is there anything rose quartz can’t help with? The stone of universal love is here to supply that unconditional comforting goodness that just feels like a much-needed hug. While everyone can use this type of soft energy, that’s especially true for those who’ve spent all day absorbing and feeling every facet of human negativity.

“[Empaths] would want to have a pink or green crystal for the heart chakra [the energy center for love],” Best tells NYLON. “This would be for healing and comfort and to help regain peace and just have compassion for other people and their emotions,” she says, recommending any green or pink healing crystals like green aventurine or rhodonite, in addition to rose quartz.

Experiencing life through other people’s emotions can be a heavy burden to bear, but thankfully, there are plenty of protective and healing crystals for empaths to turn to. Keep the emotions limited to your own, and sift out the low vibrations by keeping these soothing stones with you wherever you go.

Anjie Best, founder and owner of Peach and Pixie