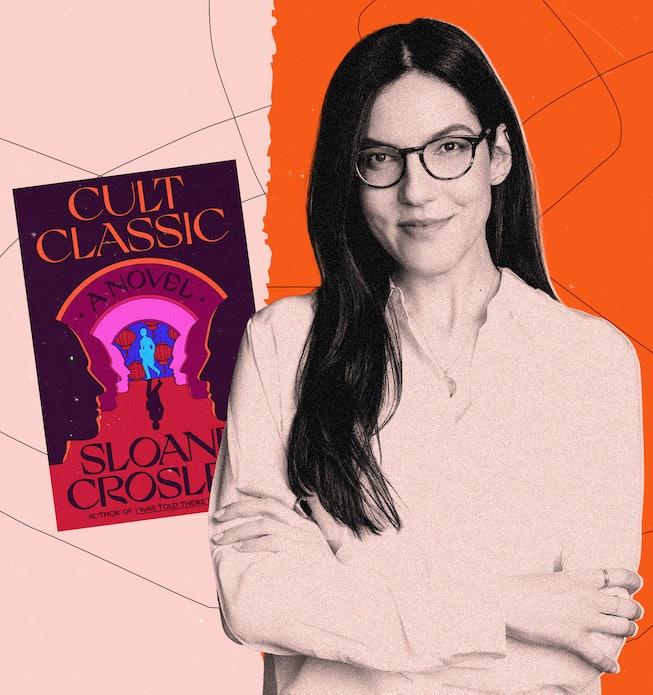 Dipping a thin-cut french fry into an aioli at Odeon, Sloane Crosley remembers getting a kick out of an early Goodreads review of her latest novel Cult Classic: “I could read 1,000 pages of Sloane Crosley complaining about guys in New York City,” she recites.

“I could also read 1000 pages of that,” I admit, telling her I often took photos of passages and sent them to my other single friends.

“You should see the first draft,” she says, as she nudges her green salad towards me and encourages me to eat a vegetable.

I’d like nothing more than a thousand pages of Crosley’s well-rendered sketches of short and long relationships — and the bizarre things people do in them — that make up the applesauce of the book. The medicine is the larger questions around how relationships should function in one’s life versus how we’re taught they should. As we dip a seemingly endless number of french fries into an array of dips she compares to the lineup of hot sauces on Hot Ones, we talk about how there’s something reductive about novels that are about single people, or about relationships, how they get relegated to the “romance” or “summer beach read” category, whereas a story about, say, a divorce, doesn’t.

Cult Classic is a book with a lot of feelings about relationships that are biting, observant, and sincere, but never earnest. In the novel, Lola, in her late 30s, is newly engaged to a stable, nice glassblower before her world gets rocked when she starts running into all her exes in New York City. Except it’s not by coincidence: She’s at the center of an experimental contemporary cult run by her former magazine editor turned guru boss – designed a la Eternal Sunshine of the Spotless Mind to help sell the nebulous idea of closure, like a Disney World ride from Hell.

“It’s the kind of fun that destroys you,” I describe the plot of her own book to her. “Kind of like dating.”

“Fun, but you know, there’s just a bullet in one of the chambers,” she says.

It’s a Trojan horse of a novel. Maybe you come for the thrilling plot and stay for the examination of her past relationships, which hinge on Crosley’s trademark humor of exasperation and observation: “This was a frequently employed tactic among men, to knock you down and then ask what you’re doing on the floor. The adult iteration of Why Are You Hitting Yourself? Except most of them sincerely wanted to know,” she writes. Maybe you come for the relationships and stay for the moral arguments around how love should function in one’s life, or how you can balance it with other fruitful relationships, like bosses or friends that can take the place of family. “Sometimes choosing the right partner seemed like everything,” she writes. “Sometimes it seemed as deeply irrelevant as deciding what to wear to a wedding.”

“ If you date someone for five months, it’s just enough time to do real damage to each other without actually being able to claim that something bad happened. So what are you supposed to do with that time? It doesn't exist for you?”

“I feel like [being single] deserves to get written about in this non-cheesy, non-stupid way. There’s something people get embarrassed about dating so much or being single, and they shouldn’t. That’s part of your life,” she says, adding that a lot of people look at being single as “a pit stop,” or a temporary place on the way to a destination where nobody wants to remain for long.

But for Lola, it’s not just about seeking closure around men she’s dated, but around eras of her life. The novel is as nostalgic about old situationships as it is about a not-so-distant New York City as it is about the heyday of magazine journalism. It’s nostalgic for a time when life could be messy but entertaining – when someone might treat your heart like their own personal piñata, but at least you’re at the party. But that’s where the real heart of the book is: It gives weight to relationships that are ill-defined, to the people you almost dated, but never did, the people who define you, who don’t fit into a singular definition.

“Ill-defined relationships don’t necessarily don't get their due. Those are the relationships that are so much more part of my life and I think they’re under-focused on in a way,” she says. “I wanted to give that kind of relationship the respect it deserves, even the little baby ones. If you date someone for five months, it’s just enough time to do real damage to each other without actually being able to claim that something bad happened. So what are you supposed to do with that time? It doesn't exist for you?”

It’s hard to tell when we’re talking about the book, and when our gabbing about the universal truths of the book and relationships in general, eclipse the novel itself. But talking to Crosley is the book come to life. Even if she doesn’t believe the characters’ philosophies on love (i.e. that “marriage is agreeing to live in someone else’s narrative”), and even if she hasn’t shared all the experiences as Lola (i.e Tinder, except for an ill-fated date when Crosley and a guy ate pizza at a bus stop), her gut-punch revelations are as bottomless as our basket of fries. It’s those insights, served as straight-up and dry as a martini, that make the book good on every page.

“I feel like I’m doing a Ted Talk about relationships, which is what I wanted to avoid,” she says after telling me that pop culture asks you to “get a concussion” once you fall in love. “Apparently, I’m built for it. Call me, Ted!”

Eventually, we come back to the book, even though the book is everything we’ve been talking about. “All you want is acknowledgement that this really happened,” she says. “I think that so much of what Lola is looking for is an acknowledgement that it mattered to these people, too.”