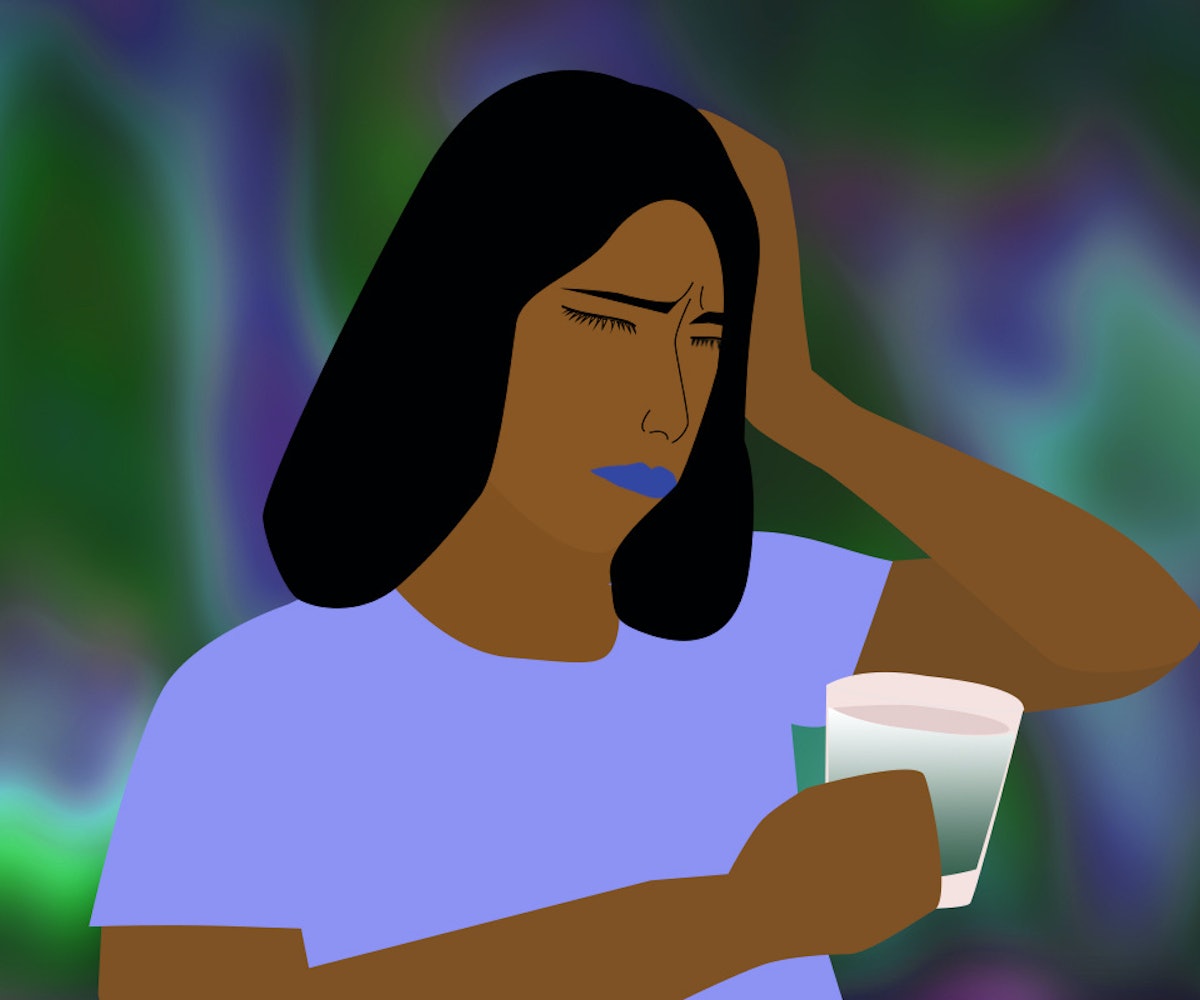 There's plenty of literature online covering how to avoid being roofied at a bar or otherwise — don't leave your cup unattended, don't accept drinks from people you don't know, et cetera, all to avoid having Rohypnol or other date rape drugs slipped into your drink. But things happen, and even the utmost precaution won't stop someone with bad intentions. During my sophomore year of college, I went to a club with my best friend, had a single drink, and blacked out as the result of being drugged, despite having played by all the safety rules. It was a terrifying experience all around, especially when I had no idea what to do when I finally realized what had happened.

Being drugged in itself is an assault, and it should be treated with the same sensitivity and respect as any other type of assault, in the immediate aftermath and beyond. So, what should you do if you suspect something was slipped into your drink, or your friend's? NYLON spoke with a variety of health care professionals to offer a guide outlining the steps to take if you think you've been drugged, as well as how to help a loved one who may have experienced this.

Depending on what kind of drug you’ve been given, it may or may not be immediately obvious that something is wrong. “In some cases, it becomes apparent pretty quickly that something is in your system, and in other cases, it can take quite a while for it to become clear that someone has a substance in their system that they are not aware of,” says Ariel Gordon, director of the National Sexual Assault Hotline at the Rape, Abuse & Incest National Network (RAINN). Gordon describes the following early symptoms that might indicate you have been drugged: difficulty breathing, feeling more intoxicated than you feel you should (based on how much alcohol or other substances you have knowingly consumed), dizziness, nausea, sudden body temperature changes, or gaps in memory (waking up with no knowledge of what happened the night before).

"If you've been drugged, you don't know what you've been given, and you don't know how your body is going to react to that and how that substance might react with anything else you have taken, in terms of routine medications," says Nicole Cooper, Ph.D., licensed clinical psychologist at Union Square Practice and assistant professor of psychiatry at NYU Langone Medical School. "It is really important to go to the emergency room; let them monitor your vitals, let them make sure that there's nothing poisonous you've been given." Even if you don’t recognize that you’ve been drugged until the next morning, it’s still important to seek medical care ASAP to make sure your body is recovering adequately.

Whether the drug appears in your bloodstream doesn't invalidate your experience. As Dr. Kate Rowland, M.D. and professor at Rush Copley Medical Center, points out, it is "hard to detect Rohypnol in the blood or other bodily fluids," but seeking medical attention nevertheless will allow all physical and mental health concerns to be addressed, and will help get you in contact with support services. Rowland adds, "The decision to seek medical care is separate from the decision to seek legal recourse. You can see a doctor or nurse without calling the police, pressing charges, or even pursuing legal action, at the time or in the future."

If you think you may have been sexually assaulted, it's even more important to seek medical attention right away. "Not to sound like an alarmist, but if someone has [drugged] you, then you have been assaulted," says Dr. Al O. Giwa, M.D., doctor of emergency medicine at Mount Sinai Beth Israel. "You should be evaluated by a sexual assault forensic exam," better known as a rape kit.

Even if you have no idea whether you'll want to press charges now or in the future, the evidence collection is time-dependent — per RAINN, DNA evidence often has to be collected within 72 hours to be analyzed by a crime lab — and having this evaluation done in no way affects how long you can wait to report the crime. Though in some cases (if you are a minor, for example), the evaluator may be forced to report the assault. "Other than legal issues raised, if you have been sexually assaulted, you should be tested and treated for potential STDs," Giwa adds.

Rowland advises that when seeking medical help, "ignore or ditch any health care provider, doctor, nurse, or anyone else who suggests you made bad decisions that led to being drugged, or that being drugged was your fault. You can find empowering providers, especially for long-term or non-emergency follow-up."

Even if they do not suggest you are to blame, these medical professionals may not be equipped with the most sensitive language to discuss your experience. "Even an experienced doctor or nurse with the best of intentions might not know how to respond to you, because it's a horrifying thing to hear,” Cooper says. “They might not say things that are helpful; they might say things that are unintentionally hurtful, and it's very helpful to know this going into the process." She adds that many in the medical profession "are not well-trained in how to handle trauma survivors, particularly in the immediate aftermath of the trauma."

You should never be made to feel like you played a role in what happened to you. “The only person who is responsible for sexual assault or an incident of sexual violence is the perpetrator,” Gordon says. “It's never the [survivor’s] fault themselves. They're the only one who is allowed to make choices for their body, and choosing to use drugs or alcohol voluntarily is never an excuse for another person to assault your body or make you feel unsafe.”

If you need help connecting with a medical provider who will support and validate you, call the National Sexual Assault Hotline at 1-800-656-4673 for a referral.

Surround Yourself With Trusted Friends Or Family

Even if you can’t seek immediate medical attention, it’s important to surround yourself with other people who can watch out for you in the hours and days after the incident. "Rohypnol wears off after about 12 hours, and people should stay around friends or family they trust until they are sure the drug is out of their system,” Rowland says. They can keep an eye out for negative symptoms of the drug, make sure you "don't vomit, stop breathing, have seizures," or have cognitive issues, such as mood swings or not knowing where you are. "If you are drugged and are somewhere safe, with people you trust, they will be your eyes, ears, and brain ... and they can keep you safe or seek care for you until the drug wears off," Rowland adds.

If you're the friend or family member trusted with being by the victim's side, be an active listener and check in with them. "The biggest mistake that loved ones and friends make inadvertently is to not allow the person the space to tell their story," Cooper says. "It can be something as subtle as you've nodded your head when they told you the story and did not ask a follow-up question, and so the survivor walks away thinking, This person doesn't believe me or they think it's my fault or they don't they don't care." Continue to follow up with them, and ask how they are doing. Cooper advises: "Offer specific ways to assist, whether it's offering to bring them to a doctor's appointment, accompany them to make a police report, or even just give them a ride to work. Follow up and check in, because your loved one is going to feel ashamed and isolated and will be tending to avoid people."

So long as you are alert. "The drugs will continue to have effects until they are fully broken down, which the body mostly has to do on its own," Rowland notes. "Being dehydrated might make that take longer, but people shouldn't drink or eat unless they are fully alert." In the days following, Giwa notes that "staying hydrated and in the company of trusted family and friends that can report any untoward effects of the drug" is important.

Check In With Yourself

"In the ensuing days, people should be aware of changing emotions as they process the experience. An initial shock or numbing may give way to relief at having survived, which may change into anger or sadness at the realization of having been victimized," Rowland notes. She adds: "People should know that their responses are theirs — everyone can have their own experience of being drugged; others [may] find it much more difficult to incorporate into their lives and carry on."

"Four weeks following the assault, you might well have what we call acute stress disorder,” Cooper says. “That is a form of anxiety that occurs in the first month following a trauma.” The symptoms overlap with that of PTSD, and can include feelings of detachment, heightened anxiety, irritability, difficulty concentrating, and insomnia, as well as memory problems, "especially if you were drugged." She adds, "Trauma memories get encoded very differently than non-traumatic memories, which means that whether you were drugged or blacked out or not, you may have difficulty remembering certain parts of the event." Additionally, you may have nightmares or flashbacks to the event. If these symptoms last more than a month and "cause you great distress and get in the way of your functioning in any role of your life, a PTSD diagnosis might need to be made" from a licensed mental health provider.

Don't Be Afraid To Ask For Help

"Ask your friends and loved ones for what you need. Tell them what you need and what you want and how they can help you," Cooper says. "For some people, that might just be making plans to do something simple and have a nice time. For some people, it might be listening deeply." Being upfront with what you need for your personal recovery will help your family and friends to give it back to you.

If You Can, Seek Professional Counseling

"The sooner the better," Cooper asserts. "Ideally, if you have your choice, you would want to seek a therapist that specializes in trauma, [or] a group therapy experience for trauma survivors," she adds, clarifying that it should be moderated by a mental health professional. Cooper recommends Safe Horizon to assist in finding the help that feels right for you; as well, it has a direct hotline to call for immediate help.

A mental health provider can not only support you in the weeks and months following your assault, but they can also help you begin to find peace again after a traumatic event. Know that you will get through this, and there are people out there who want to help you heal and feel like your best self again.

This article was originally published on Sep. 30, 2019