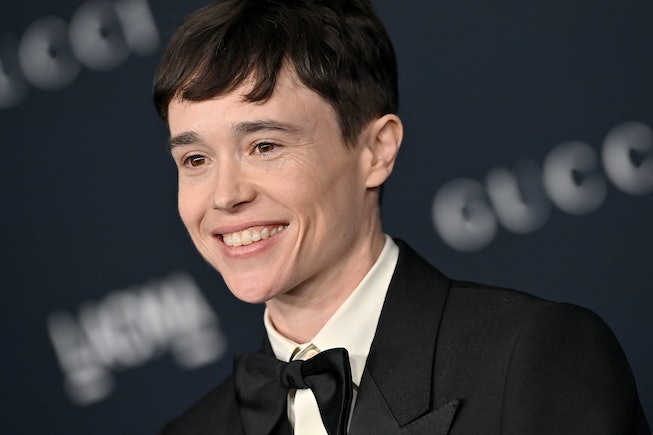 Elliot Page — the beloved star of Juno and The Umbrella Academy — has written a book. The superbly-titled Pageboy, a coming-of-age memoir, will be released June 6 from Macmillan.

According to the publisher, Page, who is already one of the most famous trans people in the world, “will now be known as an uncommon literary talent, as he shares never-before-heard details and intimate interrogations on gender, love, mental health, relationships, and Hollywood.” The book will also dive into behind the scenes details and “intimate interrogations” on sex, love, trauma, and Hollywood, according to Page’s website.

The actor revealed his literary ambitions — and its gorgeous cover art — on Instagram, where he shared a little bit about what it was like to write the book, which has been in the works since at least February, when it was announced, about how writing it was nearly impossible at times, and how important it is for trans people to be able to share their experiences.

“Writing a book has come up a few times over the years, but it never felt right and quite frankly, it didn’t feel possible. I could barely sit still, let alone focus long enough to complete such a task. At last, I can be with myself, in this body. So, I’ve written a book about my story,” Page wrote. “Trans people are facing increasing attacks, from physical violence to the banning of healthcare, and our humanity is regularly ‘debated’ in the media. The act of writing, reading, and sharing the multitude of our experiences is an important step in standing up to those who wish to silence and harm us. Books have helped me, saved me even, so I hope this can help someone feel less alone, feel seen, no matter who they are or what path they are on.”

The jacket art photograph, featuring Page looking directly at the camera, wearing jeans and a white tank top, was taken by Catherine Opie, who is best known for her strikingly intimate color of particular groups, like high school football players, S&M leather participants, and LGBTQ+ communities.

“At many points in my life, it felt unbearable to be in front of a camera, but making this cover with acclaimed photographer Catherine Opie (@csopie) was a joyful experience that I will never forget,” said Page.

You can pre-order Pageboy at ElliotPageBook.com.