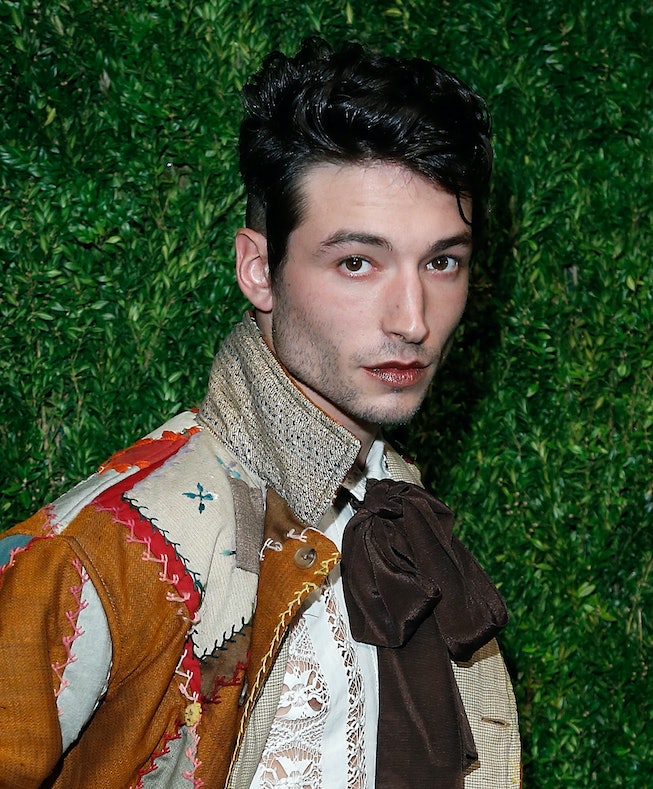 Ezra Miller has had a series of run ins with the law in the past few months, including being arrested for disorderly conduct and harassment, providing fodder for Twitter, prompting concern from fans and jeopardizing the actor’s career.

Miller, best known for playing The Flash in the Justice League franchise (or to some of us as Patrick in Perks of Being a Wallflower and the titular Kevin in We Need to Talk About Kevin), and who stars in the recently-released Fantastic Beasts: The Secrets of Dumbledore, is currently on pause for projects with Warner Bros. and DC as a result of their run-ins. While Hollywood has a high tolerance for stars committing crimes, execs at Warner Bros. and DC in March reportedly paused any future projects involving Miller, who was in talks to appear in a potential sequel to The Flash.

Besides run ins with law enforcement for things like disorderly conduct, Miller has also been accused of stealing music from a collaborator. According to music producer Oliver Ignatius, Miller leaked unfinished, raw music they were working on together, including songs the actor wasn’t even a part of, without crediting him.

Here’s a rundown of all of Miller’s run-ins with the law.

April 2020 - Miller appeared to choke a woman at a bar

A video surfaced of Miller appearing to choke a woman in a bar in Reykjavik, Iceland in April 2020. According to Variety, the video shows Miller saying, “Oh, you wanna fight? That’s what you wanna do?” to a young woman, who appears to be jokingly preparing herself for a fight. Miller then grabs her by the throat, and throws her to the ground. According to a source at the bar, this all took place after Miller was confronted by a group of eager fans.

It’s unclear how much time Miller spent in Hawaii, but they were accused of committing several minor offenses there. Police say Miller was the source of at least 10 calls since March 7, mostly for minor offenses like filming people at a gas station, refusing to leave the sidewalk area of a restaurant, and arguing with people.

March 28, 2022 - Arrested in Hawaii for disorderly conduct at a karaoke bar

On the evening of March 27, the actor was arrested for harassment and disorderly contact at a karaoke bar. What set Miller off? Per Hawaii Police Assistant Chief Kenneth Quiocho, Miller was aggravated with people singing Lady Gaga and Bradley Cooper’s “Shallow” from 2018’s A Star Is Born.

Miller was apparently yelling obscenities, grabbed a mic from a singing woman, and lunged at a man playing darts, according to police. They were released after paying a $500 bail.

In May, new footage of the incident was released, showing Miller get angry after a cop calls them “sir,” to which Miller responds: "I'm sorry, I'm not a sir. I'm a transgender nonbinary. If you fail to do that again, that is an act of intentional bigotry, and it is a technical hate crime under U.S. federal law. Please call me they/them/their, and you can use the term 'mx' if you prefer. Transgender nonbinary!"

March 29, 2022 - A couple gets a restraining order against Miller

According to the AP, two Hawaii residents accused Miller of breaking into their bedroom and stealing their passports and wallets in late March. On March 29, the couple people filed a petition asking a court for a temporary restraining order. According to The Independent, the complaint says Miller “burst into the bedroom of the petitioner(s) and threatened” the alleged male victim by “saying ‘I will bury you and your slut wife.’” The restraining order was later dropped.

Miller reportedly threw a chair at a 26-year-old woman, striking her in the head, according to a police report from an incident on April 19. According to the report, police responded to a call about an assault at a party, and said Miller became “irate after being asked to leave and reportedly threw a chair, striking a 26-year-old female in the forehead, resulting in an approximate half-inch cut.” Miller was later arrested after police found them on the roadway during a traffic stop.

According to TMZ, based on new legal docs, 18-year-old Tokata Iron Eyes met Miller in 2016, when she was just 12 and he was 23, while the actor was visiting the Standing Rock Reservation in North Dakota. Her parents say they formed a friendship that put her at risk, and claim the actor supplied their her with alcohol, marijuana and LSD. The parents say Miller told Iron Eyes to go by the name “Gibson,” and took her car keys and credit cards. Iron Eyes recently posted on social media that they’re not in need of a conservatorship.

Although the parents of 18-year-old Iron Eyes have obtained a protective order against The Flash, law enforcement has unable to locate Miller in order to to serve the actor with the order. In a June 9 interview with the Los Angeles Times, Tokata’s father Chase Iron Eyes said he and the court “have no idea of knowing where Tokata and Ezra are to gain help from other jurisdictions” to serve or enforce the order.

The order bars Miller from contacting or harassing Tokata, Chase Iron Eyes, and his wife Jumping Eagle for 30 days. Miller is also ordered to stay 100 yards away from the family’s residence during that time. The court set a hearing for July 12 to allow Tokata and Miller to appear and “weigh in,” per Iron Eyes’ statement.

The family of a 12-year-old child in Greenfield, Massachusetts has accused Miller of acting inappropriately and harassing them one evening in their downstairs neighbor’s home, and on Wednesday, were granted a temporary harassment prevention order against the actor.

Just days later, a Greenfield, Massachusetts court granted another temporary harassment prevention order. It “was issued without advance notice because the Court determined that there is a substantial likelihood of immediate danger of harassment,” as reported by Boston.com. This harassment prevention order stems from encounters between the 12-year-old, their mother and a downstairs neighbor, who is in a band with some of Miller’s friends.

According to The Daily Beast, Miller claimed that the board game Parcheesi was rooted in Rastafarian culture. When the neighbor questioned Miller about this claim, they allegedly screamed into their face before opening up their jacket to reveal a gun and said “talking like that could get you into a really serious situation.”

June 23, 2022 - Miller is reported to be housing a young mother and three children in unsafe conditions at a farm in Vermont

Miller is reportedly housing a 25-year-old mother and three small children at a farm in Vermont, the children’s father and two sources told Rolling Stone. They feared for the safety of the kids, who are ages one through five, saying that there are unattended guns on the property; one of the sources shared that a one-year-old put a loose bullet in their mouth. The family has been living at the farm since mid-April, after meeting Miller in Hilo, Hawaii, where he racked up a string of run-ins with the law.

August 8, 2022 - Miller is charged with a felony burglary in Vermont

Miller has been continuing to wreak havoc in Vermont. According to a May 1 police report, police found several bottles of alcohol taken from a Stamford, Vermont residence while the homeowners were away. Now, after collecting statements and reviewing surveillance footage, police are charging Miller with felony burglary.

Miller released a statement apologizing for his concerning behavior in recent months, citing an “intense crisis” of “complex mental health issues,” for which the actor is now seeking treatment. “Having recently gone through a time of intense crisis, I now understand that I am suffering complex mental health issues and have begun ongoing treatment,” Miller says. “I want to apologize to everyone that I have alarmed and upset with my past behavior. I am committed to doing the necessary work to get back to a healthy, safe and productive stage in my life.”

Miller pleaded not guilty to burglarizing a home in Vermont on Monday, as the actor appeared in court on charges of burglary and petit larceny relating to the August incident. If they are convicted, they could face up to 26 years in prison.

Miller made their court appearance by way of video on Monday, and was granted approval to remain out of jail on the condition that they do not go near the home Miller allegedly burgled.

"Ezra would like to acknowledge the love and support they have received from their family and friends, who continue to be a vital presence in their ongoing mental health," Miller’s attornye Lisa Shelkrot said.

This article was originally published on May 17, 2022