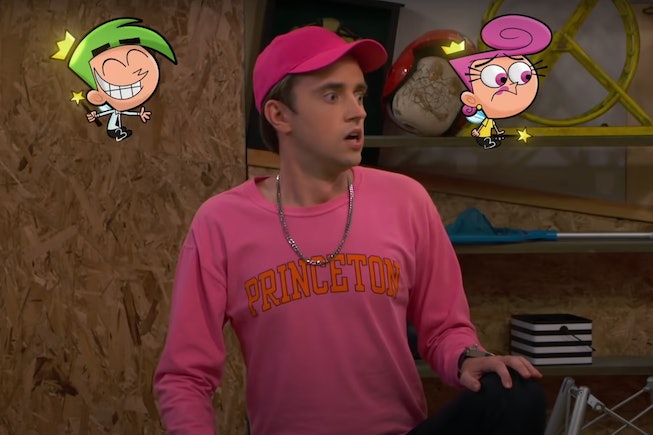 In a media wasteland of reboots, we never thought we’d sink as low as a Fairly OddParens live-action reboot. Forgive me, it’s not Cosmo and Wanda, the fairies who, for no reason at all, decided that some ten-year-old was worthy unlimited wishes. But these generous fairy creatures of a fake cartoon world have dealt enough with the shenanigans of pre-teens and should get to rest. Plus, the world is already a dark enough place without another show where pre-teen actors play off cartoons. But nevertheless, the gears of the reboot money factory keep turning, which are now spitting out The Fairly OddParents: Fairly Odder, which will stream on Paramount Plus starting on March 31.

The official trailer was released on February 24, which shows green-haired Cosmo and pink-haired Wanda looking exactly the same as the Nickelodeon show originally aired from 2001-2006 — while Timmy is all grown up, wearing a long-sleeve pink Princeton t-shirt. Timmy was never that smart. Did he also wish for that acceptance letter? It’s likely!

The series focuses on Timmy’s cousin Viv as she moves to the fiction town of Dimmsdale when her dad reunites with his high school sweetheart. Turns out, the high school sweetheart’s son sees Timmy bestowing his fairy godparents on Viv as she deals with the change in her life, and the two kids agree to take turns making wishes. Wholesome! I just have some questions. Viv also inherited...a human body? Was Timmy’s last wish to become a real boy? And if so, why are Cosmo and Wanda still 2-D in a 3-D world? The only show we’ll allow to get away with hybrid cartoon and real-life is Lizzy McGuire, but the dream of that reboot ended when chaste Disney execs wouldn’t allow a storyline in which Lizzy — now 30 — wanted to party and hook up.

Anyway, maybe I’m being a little harsh on the fine execs at Paramount Plus. I guess this isn’t the first live adaption of Fairly OddParents. Nickelodeon heartthrob Drake Bell previously portrayed a live-action Timmy in 2011's A Fairly Odd Movie: Grow Up, Timmy Turner!, which showed Timmy as a 23-year-old. (Does anyone want to watch a movie about a 23-year-old man?) Susanne Blakeslee and Daran Norris, who originally voiced Cosmo and Wanda are also returning for the reboot, and we’re very happy for them for holding onto steady, lucrative work in the hellscape that is show business.

Anyway, you can watch the full trailer, below.