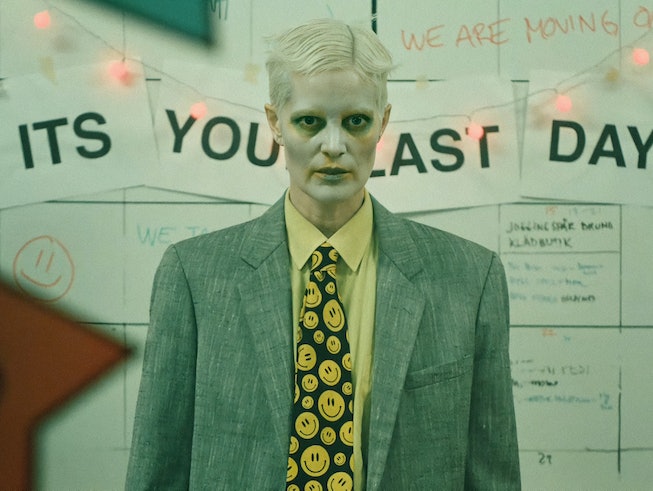 At long last, Karin Dreijer has returned as Fever Ray. For the first time since 2017, the Swedish singer-songwriter and producer, formerly of The Knife, has gifted us with an ominous synth pop track, along with an accompanying surrealist music video set in a dystopian corporate office.

“What They Call Us,” which was written and co-produced with Dreijer’s brother and former The Knife member Olof Dreijer, premiered on Wednesday, marking the first non-remix single from Fever Ray since the release of album Plunge in 2017. It also may or may not mark the triumphant return of The Knife — it’s the first new studio recording to involve both Dreijers since 2014’s “För Alla Namn Vi Inte Får Använda.”

“What They Call Us” has driving techno rhythms with warped, wonky synths, giving it a sensual, foreboding quality. Its video, which was written and directed by long-time collaborator Martin Falck, hits all of those same notes, and is all too fitting for the start of the spookiest season.

The video opens with Dreijer, dressed not unlike a haute couture Beetlejuice in a smiley face tie and ghostly white face, microwaving a Hot Pocket and sitting at a glitching computer next to a hallowed out watermelon in a partially destroyed office. “First I’d like to say that I’m sorry/ I’ve done all the tricks that I can/ cinnamon bun in the oven/ there’s a fire in my hand,” they sing in an emotive, strained cry, their face covered in teal makeup with flecks of orange. The office is more funhouse than functioning; there’s a sign haphazardly hanging from a single tack that reads “Hard works pays off;” one of the coworkers has red laser beam eyes; there’s a room filled entirely of plants in which Dreijer hides in. Later, we see Dreijer dissociating during a lackluster office party, presumably celebrating their last day at the company, which then turns into a rave with workers kicking their loafers into the air and taking to stripper poles. As always, Fever Ray excels at turning seemingly mundane and even eerie things into something erotic.

It’s unclear if Fever Ray has an album on the way. They have famously given out their music in tiny, gorgeous dollops. After all, their last solo release came after an eight year hiatus, following their 2009 self-titled debut LP. Nevertheless, we will graciously accept this addicting and strange seasonal offering. You can watch “What They Call Us” below:

NEXT UP
Culture
Aly & AJ's "With Love From" Video Is A Postcard Of Melancholy
Culture
A Britney Spears-Inspired Musical Is Coming To Broadway
Culture
Spotify Wrapped Is The Only Social Media That Doesn’t Lie
Culture
Not One, But Two BTS Documentaries Are Coming