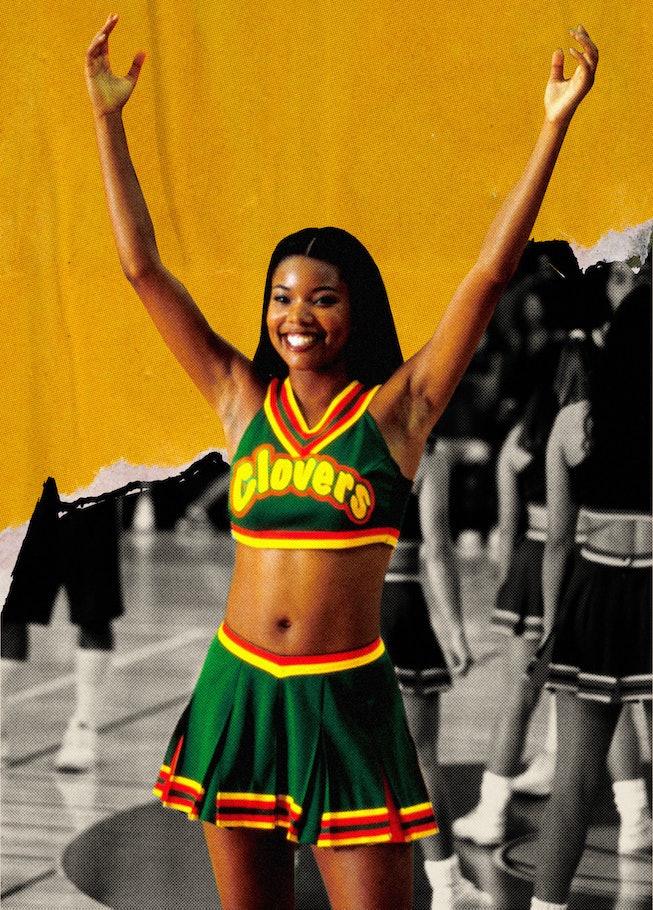 Before Mean Girls introduced the phrase “unfriendly Black hotties” into the pop culture lexicon, there was the East Compton Clovers. As the all-Black rival cheerleading squad to the all-white Toros in the teen cult classic Bring It On, the Clovers set the film’s plot into motion when Kirsten Dunst’s Torrance and Eliza Dushku’s Missy visit East Compton High after the revelation that the Toros’ old cheer captain had been stealing her competition-winning cheer routines from the Clovers’ cheer squad. The four Clovers are Jenelope played by Natina Reed, Lava played by Shamari Fears, Lafred played by Brandi Williams, and of course, Isis, played by none other than Gabrielle Union.

The Clovers may only appear in a handful of scenes, but their impact has eclipsed Bring It On into its own place in culture. Every Halloween I can expect to see dozens upon dozens of photos on Twitter and Instagram of Black women donning the green and red uniforms that the Clovers popularized. Isis’ quip of “I know you don't think a white girl made that sh*t up,” when confronting Torrance and Missy, has been given the meme treatment and utilized during online conversations of white artists stealing from their Black contemporaries.

Thanks to the introduction of terms like “cultural appropriation” and “white privilege” in our collective vocabulary, Bring It On viewings have been met with a newfound appreciation and perspective. People are able to understand the film as a reflection of the long-existing dynamics between white women and Black women, in which white women use the creative labor of Black women for their own gain. The Toros dominated national cheerleading competitions using the Clovers’ routines, and a stunned Torrance is left to grapple with the reality of her plagiarized success.

As Isis, the captain of the Clovers, Union brought the necessary self-assured and unf*ckwithable attitude needed as a foil to Dunst’s bubbly perfectionist Torrance. Bring It On was the breakout film for Union, whose career up until then largely consisted of her playing in episodic roles on shows like Sister, Sister, 7th Heaven, and the sidekick best friend with a few lines in teen classic films like 10 Things I Hate About You and She’s All That. Isis would set the tone for the type of characters that viewers would see Union playing: quick-witted, smart, commanding, and strong.

So this is why I was shocked when I read about Union’s feelings of failure towards her Bring It On character. In her latest memoir, You Got Anything Stronger?, Union pens an apology to Isis, for what Union feels was her role in softening the character in order to appease white audiences. In her essay, Union writes about helping the film’s director Peyton Reed amend some of the dialogue she felt was inauthentic to what a Black girl like Isis would speak like. But during the process of being allowed to craft and shape her own character to resemble an actual Black person and not just a character in a white person’s imagination, Union speaks about the concessions she made to make Isis what she felt was more palatable for the white gaze.“Black girls like you thought they couldn’t be less than perfect,” Union writes.

She points to the scene where Isis and her cheer squad first approach Torrance and Missy. Jenelope repeatedly threatens to physically beat them, only to be stopped by Isis who says “unlike them, we have class.” “I thought surrender was ‘class,’” Union writes. “I didn’t know that I could give you ‘class’ and dignity while also being very clear about holding people accountable.”

While reflecting on Isis, Union drew parallels between her character and her own time as a high school student; Union also had to overachieve in order to gain access to places her white peers could access with relative ease. She took night college courses as a high schooler, attending with students many years her senior. “They valued the experience, doing the papers just because they wanted to,” Union noted, “But you and I had to, Isis.”

Union is writing about an anxiety that many Black women experience. That Black women must work harder than their white peers in order to achieve even some success, be it professional or academic. Even though the Toros effectively lost a competition after doing a routine that their hired choreographer had sold to multiple teams, they were still allowed to go off and compete again in the final competition. In contrast, the Clovers almost lose their chance at competing over financial restraints.

In her apology, Union refers to herself as Isis’ mother. “Like so many Black mothers, I was working with the facts at hand,” she says. And like any good Black mother, Union just wanted the best for Isis in a world that was determined to give her and all other Black girls like her much less. I would be remiss to speak to whether or not Union should have regrets about the sacrifices she made in order to bring Isis to life. But nothing about Isis ever felt accommodating to whiteness. Not the moment she ripped up Torrance’s check, seeing it as a blatant attempt at Torrance trying to assuage her white guilt. Not the moment she led the Clovers in exposing the Toros’ stolen routine at the latter’s packed football game. And certainly not in the moments when we first meet her when she demands respect and credit from the Toros. Every step of the way, Isis and the rest of the Clovers stood up for themselves, and it’s why Union’s character continues to resonate with Black women over 20 years later.