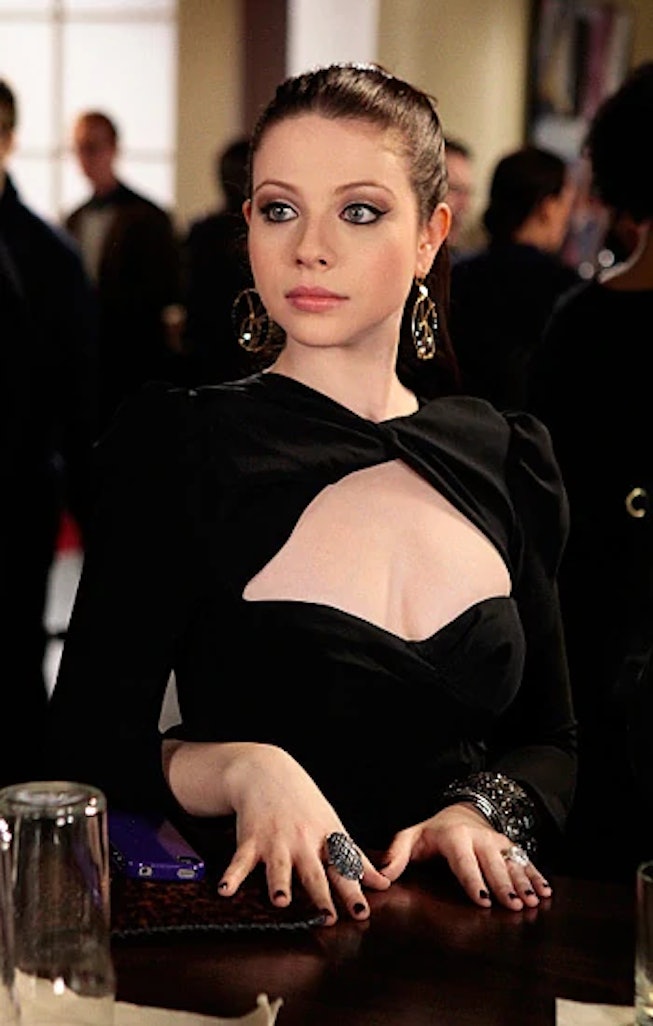 Hey all you Upper East Side-ers. Rumor on the street is that chaos queen Georgina Sparks may be returning to Gossip Girl. What is she doing here? And why? It’s unclear — but in June, Gossip Girl’s social media accounts teased a cameo from Michelle Trachtenberg, who played the notorious mean girl. “It only takes one spark … to start a fire,” read the text over a video that showed Georgina sitting in an auditorium and clapping.

It’s an astute line for the character whose presence induced a tensing of the shoulders from basically every character as soon as she arrives on the Upper East Side. While Georgina had some good zingers (“You can tell Jesus that the bitch is back,” for instance), her presence past Season 1 only served to convolute the show in ways that ultimately hindered it.

The first two seasons of Gossip Girl can do no wrong in my eyes, but afterwards things get a little murky. There are too many storylines and too many characters to be able to care about any of them. We came for the drama between Serena, Blair, Dan, Chuck, Nate, and Vanessa (respectively) and indulged the drama of Jenny, Rufus, Eric, and Lily, but that’s already 10 characters. I get it: Soap operas are going to soap opera, but the introduction of Georgina was the beginning of the end of Gossip Girl.

The Gossip Girl writers put its audience through a lot: Need we revisit some of the more absurd plotlines? Like when Prince Louis paid Chuck’s therapist to break up him and Blair? Or when Serena’s dad tricked Lily into thinking she had cancer? I’ve seen this show maybe four times all the way through (no, I don’t want to talk about it!) and every time Georgina Sparks sashays into the Upper East Side with her leather jacket and smoky eye, I lose the plot.

I have nothing against Michelle Trachtenberg, who is a lovely actress. From Harriet the Spy to Buffy the Vampire Slayer to Seventeen Again, she’s a fixture of my childhood, the girl next door who you actually want to be friends with. But even she hates Georgina, describing her once to New York Magazine as that "evil bitch from hell.”

Georgina’s initial story arc was acceptable: We learn she was with Serena during the Pete Fairman incident, famously known as when Serena thought she killed someone, which, as absurd a storyline as it is, is enticing enough. But even the minor scenes surrounding her return feel unnecessarily dramatic for an already dramatic show: Serena misses her SATs because Georgina drugs her during dinner. She outs Eric for some reason. She befriends Dan and Vanessa by telling them she’s a girl named Sarah, from Portland. She mails cocaine to Serena in the hallways of Constance Billiard. She’s the opposite of a deus ex machina that comes to save the plot — she’s the destroyer of all order.

If we can accept the shenanigans of Season 1, her plotlines of later seasons are more difficult to forgive. She abandons her baby with Dan after forging a paternity test to prove he’s the father. (As it turns out, she had the baby with a Russian guy she hooked up with on a plane and when his wife found out about it, she hired people to kill her.) She dates Chuck’s sleazy uncle, Jack; she forms alliances with Ivy Dickens aka Charlie Rhodes (the show’s most convoluted, unnecessary character); briefly becomes Gossip Girl for some reason; sabotages Blair’s wedding to Prince Louis; and at one point becomes Dan’s book agent.

I know what you’re thinking: Gossip Girl is a teen drama, what do you expect? Whereas all the other characters at least had psychological underpinnings that at least made their wildly inappropriate actions feel somewhat understandable, Georgina has no backstory. All we know about her is that she left school to tour the equestrian circuit until she sells her pony for cocaine. This makes her not just an unsympathetic character, but a lazy one, despite all her many hours scheming. Here’s hoping an older Georgina will leave the latest generation of Constance Billard-St. Jude’s brats alone, but we’re not betting on it.