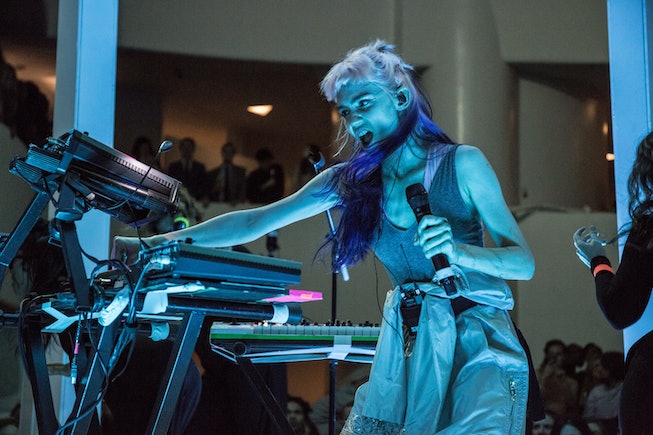 Grimes’ TikTok is a strange and beautiful place — you truly never know what you’re going to get from her. The avant-pop musician has made a name for herself, not only for making some of the most ethereal, groundbreaking contemporary music out there, but also for being a huge advocate for artificial intelligence. In fact, AI is how she and now-boyfriend, tech billionaire Elon Musk, began their romance. The two flirted over the AI thought experiment Roko's basilisk; Musk went to tweet “Rococo’s Basilisk” only to see that Grimes had already beat him to it. The rest, famously, is a highly publicized (and scrutinized) relationship, a baby, and history.

The singer took a break from her typical kooky content like designing sci-fi fashions, sword dancing, jokingly advocating for the mime community — you know the vibes! — to extol the virtues of AI and how the system could in fact be the key to dismantling capitalism and getting society on track to full communism. I’m listening!

“I have a proposition for the communists,” she began. “So typically, most of the communists I know are not big fans of AI. But if you think about it, AI is actually the fastest path to communism. So: if implemented correctly, AI could actually theoretically solve for abundance.”

Grimes elaborated her stance: “Like, we could totally get to a situation where nobody has to work, everybody is provided for with a comparable state of being, comfortable living. AI could automate all the farming, weed out systematic corruption, thereby bring to… as close as possible to genuine equality. So basically, everything that everybody loves about communism, but without the collective farm. Because let’s be real: Enforced farming is really not a vibe.”

I second that enforced farming is very much not a vibe, but can we get an economist on the horn? I have some questions. But the fact that Grimes is making a video about this is not surprising in the slightest — the woman wrote a nu-metal-adjacent song about loyally serving AI when it takes over. Get a grip, people! Watch the video below.