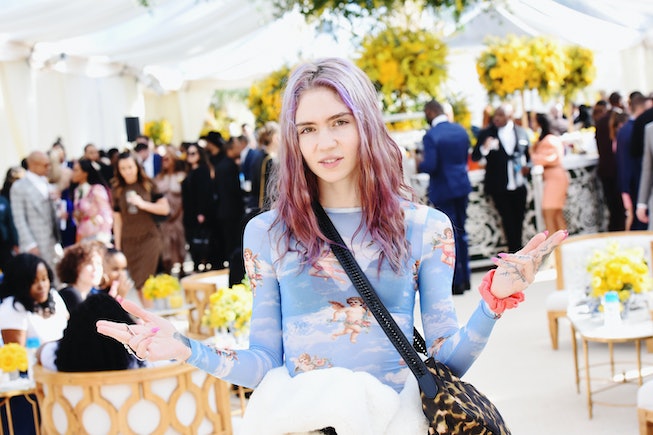 Grimes, who people generally have a lot of questions about, posted a TikTok video on July 13 where she tries to explain one of the confusing things about her: her politics.

“I’m sure many of you guys have noticed the online narrative that I used to be an avowed communist and I have betrayed the comrades,” says Grimes at the start of the video before launching into the backstory of her yearbook quote heard around the world: the Joseph Stalin fixture, “Gaiety is the most outstanding feature of the Soviet Union.”

The quote is often used as a source for her communist roots, but in the three-minute video, Grimes debunks the narrative, explaining that it wasn’t exactly an endorsement of Stalin and communism as much as it was a reference to his brutal crackdowns.

“When I started at my high school, it was covered in beautiful murals, but it was kind of a crazy high school, lots of drug use and stuff and admittedly I got into a lot of trouble there,” she says. “When I was in grade 11 or something, we got this new principal who painted over all the murals gray, and they actually went through and expelled all the worst students to try to sort of bring the GPA up. And a lot of those people were my best friends. Most of my best friends got expelled from high school during that time.”

Grimes went on to describe how the expulsions led to tons of emotional turmoil for her and her friends. “I don’t know if people know this about me, but a lot of those people actually ended up dying from drug-related causes or mental health-related causes and this is one of the big traumas of my life, actually. I’ve lost a lot of my best friends.”

She continued: “So this quote was not an endorsement of Communism; it was actually a reference, I was making a dark joke comparing my school to the Soviet Union under Jospeh Stalin, that the freedom of creativity was being oppressed and people were being sent to the gulag for not conforming. Stalin murdered millions of people in the gulags and in World War II and I think there actually are redeeming qualities about Communism, but Stalin is not one of them.”

Viewers responded to the video with reactions that were generally more confused than anything, with comments bringing Grimes’ eccentric billionaire partner Elon Musk into the fold, while others simply asked her for $1000.

The explainer comes after a now-viral TikTok video the musician posted last month where she argued that AI is the fastest route to Communism.

“AI could automate all the farming and weed out all the corruption, thereby bringing us to... as close as possible to genuine equality. So, basically, everything everybody loves about Communism, but without the collective farm,” she said. “Cuz, let’s be real, enforced farming is really not a vibe.”

The musician says there will be a part two coming at some point, where she’ll get more in depth into her, “admittedly very confusing politics.” Maybe we can finally get to the bottom of why she took “anti-imperialist” out of her Twitter bio and move on with life? Can’t wait!