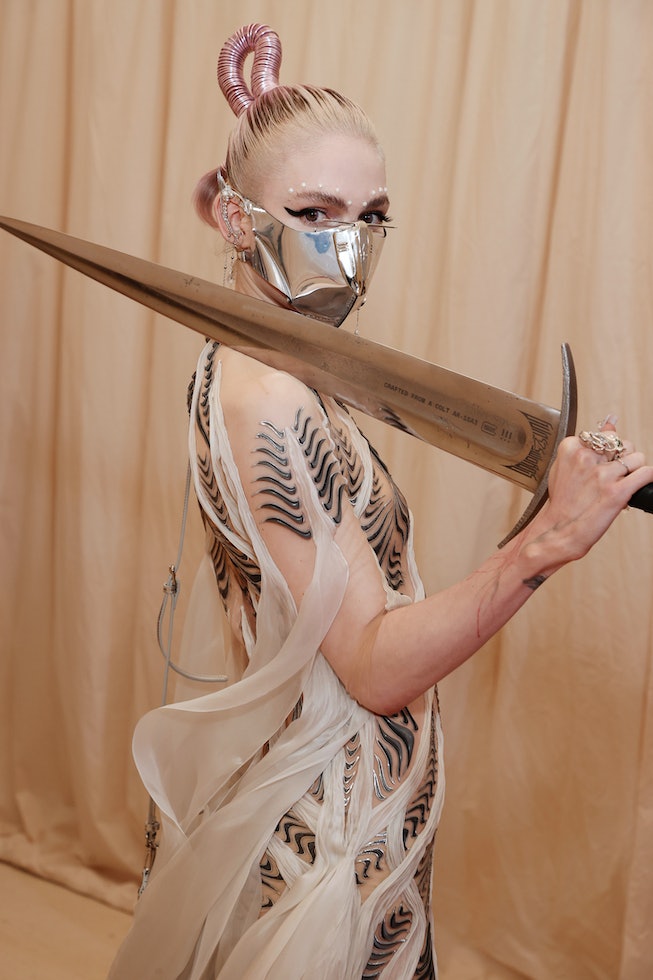 If there’s any spokes-celebrity for Dune as a novel, film, or concept, it’s fittingly Grimes, who pushed the boundaries of power accessorizing at the 2021 Met Gala, carrying a replica Medieval sword repurposed from an AR-15 to complement her silicone and silk Iris van Herpen gown.

Grimes sword may be giving Game of Thrones energy, but the singer says the sword was inspired by Dune — the 1984 cult classic Frank Herbert novel and highly-anticipated new film starring Timothée Chalamet and Zendaya. A reverence for the sci-fi novel is extremely on-brand for Grimes, our favorite sci-fi futurist princess. Real Grimes scholars already know her reverence for Dune through her discography; her debut studio album Geidi Primes is a twist on the book’s fictional planet, Giedi Prime, while the “My Name Is Dark” lyric “Paradise on my right / Hell on my left / and the Angel of Death behind,” is dialogue from the Dune character, Dr. Yueh.

“I mean, I feel like it started as a Dune thing,” Grimes told Vogue. “We were working with the Dune movie people,” she said, adding that Dune planned to “hire me as a professional fan, or like, an influencer or something.” In major fangirl energy, Grimes even wore a mask from the movie itself.

Grimes’ gown too has a futurist bent: According to Vogue, it’s made from “mirror-finish liquid silicone” that was hand-cast and arranged in a 3-D “laser-cut labyrinth” — which is like free word association for science fiction fashion. Grimes explained the sword is based on a western European sword from the end of the Middle Ages that’s a permanent piece of the Met’s collection — but with a modern twist. Grimes’ sword is cast from a Colt AR-15A3.

The sword is made by MSCHF, a Brooklyn art toll collective known for making art designed to go viral, like Lil Nas X’s satan shoes (as well as the Jesus shoes that, unsurprisingly, didn’t get slapped with a Nike lawsuit!), Axe No. 5, which combined Axe Body Spray and Chanel No. 5. There’s also BOOMER EMAIL, a newsletter of unhinged email chains from real Baby Boomers, and This Foot Does Not Exist, a bot that texts you computer-generated photographs of feet that do not exist. GUNS2SWORDS is their 54th project.

At Guns2Swords.com, a site with an aesthetic somewhere between a tarot card and an ’80s sci-fi novel cover, you can trade in an unwanted automatic rifle to be melted down into a replica of a Medieval sword, with a 28-inch blade and an eight-inch hilt, forged in New York City. Or you can simply buy a sword for $5000, because it costs to be tough! “I think it’s a beautiful thing,” Grimes told Vogue. We agree.

NEXT UP
Culture
Megan Fox’s Dreamy Vintage Gaultier Dress & More Party Photos You Missed
Culture
An Exhaustive Breakdown Of The Balenciaga Controversy
Culture
Mowalola Teams Up With Bratz For A Daring, High Fashion Collection
Fashion
Reformation & Canada Goose Team Up To Warm You Up