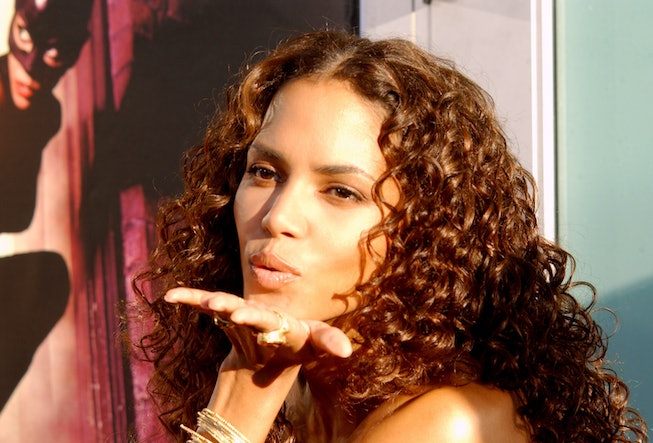 Welcome to That One Time... a NYLON series spotlighting culture’s funniest, most slept-on moments.

I have an intrusive thought — a name, really — that pops into my brain every so often. It’s not a person I’ve ever met, or will ever meet, but he is very much real to me and Halle Berry: Pitof. This mononymous man never struck it big in Hollywood, but those who recognize the name are part of a small but elite group who lived through 2004’s most beautiful train wreck, Catwoman.

The rendition of the DC Comic has everything right on paper. Berry, hot off of winning the Best Actress Oscar for Monster’s Ball and very much at the top of her game, plays the titular anti-hero; Benjamin Bratt, Alex Borstein, and Frances Conroy are on the bill; Sharon F*cking Stone is the icy villain. Sharon Stone! The key phrase, of course, is on paper. On screen, Catwoman was too campy for its time. Viewers were not ready for Berry to lose it while sniffing an orb, only to have Conroy gently hint at her newly developed feline traits by confirming that she had taken an immense liking to catnip. And they certainly weren’t ready for Bratt and Berry to play an inexplicably flirty game of basketball surrounded by cheering elementary school children! Catwoman came 20 years too soon.

The film was panned, and realized an actress’ darkest nightmare: a Worst Actress Razzie win. Lesser performers would rather drop dead than acknowledge such a win, but Berry took a different approach — not only did she accept the award in person, but she also playfully annihilated everyone involved in the film with a gracious roast for the ages.

Sometimes one simply has to laugh (as to not cry) and Berry’s acceptance speech makes me think we’re on the same page here. It’s a masterclass in poking fun at oneself, which is, ultimately, the easiest way to get through this thing called life. Berry pulls up to the podium in exaggerated hysterics — a wink at her own emotional Oscar acceptance speech just a few years prior — and even brings the damn award with her on stage. “It’s not like I ever aspired to be here, but thank you,” she laughs, clutching the statue. “And, no, I don’t got to give this back, it’s got my name on it!”

If it’s even possible to go scorched earth in a nice way, Berry might be the first person to do it on camera. Like all winning starlets before her, Berry begins to thank everyone involved in her Razzie win. “First of all, I want to thank Warner Bros,” she says, “Thank you for putting me in a piece of sh*t, God-awful movie!” The audience roars with laughter; how could they not? Standup comedians go to bed every night wishing for this kind of natural humor and charisma, or at least they should.

Berry leaves no box unchecked. She thanks the cast (“In order to give a really bad performance like I did, you need a lot of bad actors around you.”), the writers (all twenty of them, thank you very much), and of course, the man who made is all possible, Pitof. Even her acting coach, Ivana Chubbuck, gets a shoutout, likely to her chagrin. “She just wrote a book called The Power of the Actor,” says Berry, “Y’all should rush out and get it. It could change your life, too.”

After approximately seven minutes of clowning every soul involved in Catwoman, Berry lays it bare. As a child, her mom taught her the importance of not being a sore loser. She explains how she began her career in pageants, which turned out to be easy wins for her, until the Miss USA Pageant. She was up again an “buxom, blonde, blue-eyed Texan,” and Berry knew she was going to lose to her. She was right. “I looked at her, and all I could hear was my mother’s voice in my head, and I thought, okay, here’s my chance,” she says. “But all I wanted to do was f*cking slap the sh*t out of her!”

Berry ends it on a legendary note: “So, as you can imagine, I want to f*cking slap the sh*t out of these Razzie people that brought me here tonight, but I won’t do that. I’ll do what my mother taught me and stand here graciously, I’ll take the criticism, take it as a lesson learned, and I hope to God I never see these people ever again.”

Thank you Halle Berry’s mom, for your guiding wisdom, and thank you Pitof, for making this all possible.