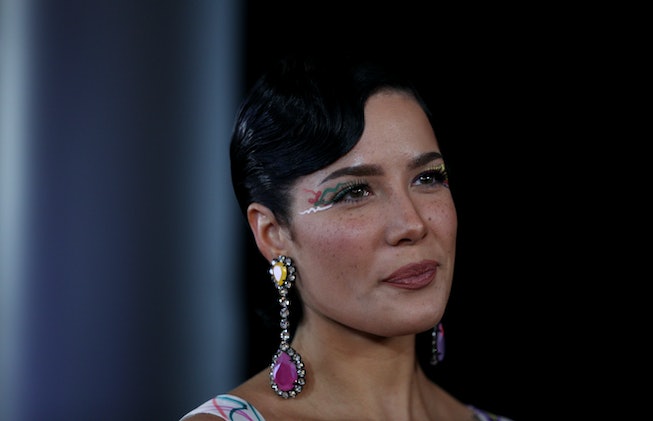 Halsey will no longer do press, after an August cover story in Allure misused their pronouns, the singer said in a series of since-deleted tweets on Wednesday.

“First your writer made a focal point in my cover story my pronouns and you guys deliberately disrespected them by not using them in the article,” the singer reportedly wrote, demanding that the magazine "do f*cking better." The Allure article explicitly mentioned Halsey’s pronouns as being “she/they,” but continued to refer to them as “she/her,” throughout the article. It has now been edited to include “they” pronouns throughout the interview, a change the magazine acknowledged on Twitter.

In their tweets, Halsey also called attention to a quote that she says was taken out of context in order to promote the story on Twitter. The tweet, which Allure has since deleted, said: “Throughout her life, @halsey has struggled with her identity as a white passing Black woman (her mother is white and her father is Black). ‘A lot of people try to write off a lot of my experiences because I present white.’”

Halsey tweeted: "Your admin bastardized a quote where I discuss the privilege of being the white child of a Black parent and intentionally used a portion that was the antithesis of the point I was trying to make.”

In the interview, Halsey says: “No matter how many tears I’ve shed because I’m not connecting with my family or my culture in a way that I would like to, or because the waitress thinks I’m the babysitter when I go out with my family, none of that would compare to the tears that I would shed for presenting phenotypically Black and the disadvantages and the violence that I would face because of that.”

Halsey also specifically told Allure in the interview they don’t like doing press. “I don’t do press anymore. I did, like, two interviews for my last album, which was 16 months ago,” she told Allure. “I just don’t translate very well in print. Even saying this is going to get me in trouble. I already know that it is ... I think sometimes [with] women who are articulate, people read it as pretentious.”

But it appears Halsey might actually be done with press now. (Or not, because she deleted these tweets.) But the singer concluded their tweets by writing: “#NoMorePress goodbye,” a hashtag which many fans rallied behind.

NEXT UP
Life
Away’s Second Designer Collection Will Have You Traveling In Style
Life
Joseph Osmundson on Virology, Monkeypox, Queer Intimacy
Life
Demi Lovato Slams Child Stardom
Life
On Repeat: Vaquera’s Away Collaboration Is Brought To You By Britney Spears B-Sides