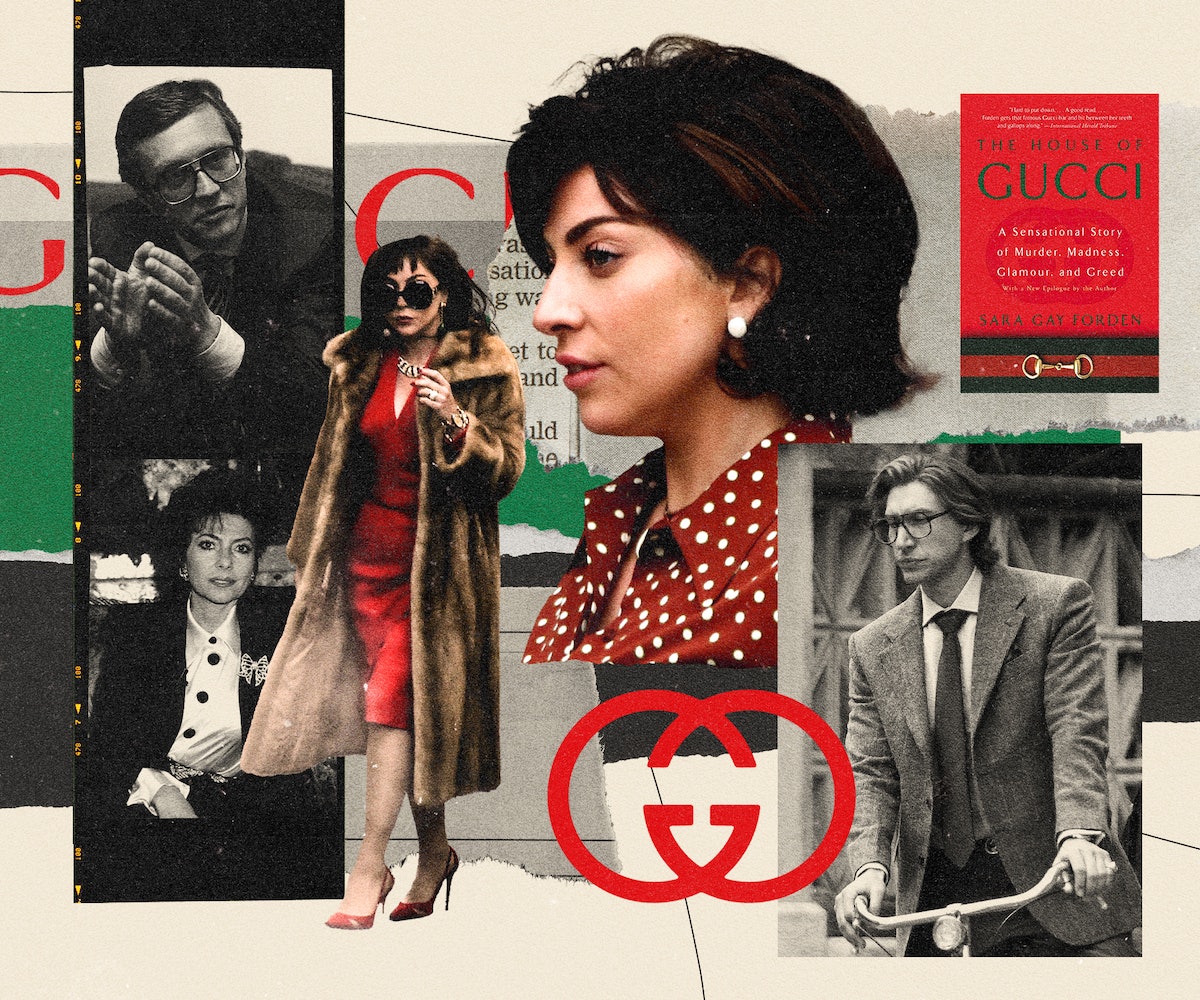 It was July 29, 2021 when we first heard the words. After months of paparazzi photos, clips of wild interactions with adoring Italian fans, and cicada-level Twitter buzz, Lady Gaga turned to a prosthetic-laden Jared Leto crossed herself and declared, “Father, Son and House of Gucci.” Over the next week I mimicked the line read over and over, my boyfriend did the same, and our Fire Island housemates graciously hid their annoyance up through Day 4 of our vacation. The cultural wave of Lady Gaga’s Patrizia Reggiani era had begun.

While I am excited for Ridley Scott’s House of Gucci, which chronicles the history of the Gucci empire and the infamous murder of its controversial chairman, something about it almost feels like an inevitable life event, looming on the calendar with anxious anticipation, like Christmas or a birthday. I will see it with my close friends on opening weekend. It will be the main talking point at parties and dinners for the following weeks, and it will be a staple of the Instagram Stories I watch until probably mid-spring 2022. We were all there for A Star Is Born — we know how this goes. (My biggest question in regards to the release of this film, is how will it affect the release of the Chromatica remix album. However, my theories on the answer to that question are for a different essay entirely.)

To prepare for this impending cultural moment, I decided to do the damn work and read the text that inspired the film adaptation myself. The House of Gucci: A Sensational Story of Murder, Madness, Glamour, and Greed by Sara Gay Forden is aptly named; throughout this book the obsession with status and money within the Gucci family is heightened to extremes that even I (someone who has worked in a restaurant in Gramercy Park) hadn’t witnessed before. Whenever a book is made into a movie one question hangs over it: What will make the cut, and what will make the cutting room floor? In light of this, I’ve compiled the list you will find below. These are the moments I demand be included in the final cut. If they are, I’ll stan this movie throughout the holiday season with passion and fury. If they aren’t, my entire personality for 6 months will be telling people why the movie was a missed opportunity. Let’s begin.

The following contains potential spoilers for House of Gucci, in theaters November 24.

To put it simply, Maurizio (Adam Driver) is a rich 22-year-old at a Ligurian beach party filled with a bunch of other rich 20-somethings when he meets his future wife, Patrizia (Lady Gaga). He works up the courage to approach her and after a quick intro, drops the line, “Has anyone ever told you you look just like Elizabeth Taylor?” At which point, Patrizia is said to have laughed, batted her eyelashes and said, “I can assure you I’m much better.” If we are not given this line by Gaga, under the filter of de-aging CGI, I will immediately walk out of the theater.

There are few things I was obsessed with more in this book than the magic. Maurizio and Patrizia are both viciously superstitious. When Maurizio buys a boat, they spend an insane night on it with a psychic exorcising it of evil spirits. When (spoiler alert) their marriage goes sour, Patrizia pays psychics to send curses to Maurizio, and he in turn hires psychics to install talismans in his homes and offices to block her spells. I cannot be expected to watch this film without Charmed-level magical hijinks, when I know full well the source material, in fact, calls for it. If it’s not in, I’m out.

The Gucci family is constantly fighting in this book. When things get violent, everyone’s weapon of choice seems to be the nearest Gucci item. There’s an iconic moment when Gucci employees come to work at the Florence design office only to find the lawn littered with Gucci bags that have careened through an open window after being hurled at one angry Gucci by another angry Gucci. When Aldo Gucci’s son, Paolo, betrays him, Aldo’s first move is to throw a Gucci ashtray at Paolo’s head so hard it shatters against the wall behind him. If a single inanimate object is used in a violent manner during the course of this film, and that object is not clearly labeled with Gucci insignia, I will be asking my friends to depart the theater with me.

4. The Rudest Store In New York

This one should be easy. In the 70s, Gucci stores became notorious for having the rudest staff in all of New York. Aldo Gucci would hire the children of prominent Italian families with the promise of a luxurious New York life, and then make them work long hours for low pay servicing the New York elite. As someone who worked in a restaurant in Gramercy Park for eight months, I think it’s only fair to demand this film include a single, simple five-line scene featuring a bitter, angry Gucci employee degrading an Upper West Sider over a complaint of a too-tight fit on a leather loafer. If I don’t get this, I’m happy to walk out of the Alamo DraftHouse immediately to go see what’s happening in the Dekalb Market Target downstairs.

This moment is perhaps the most important item on this list. After years of marriage and two children, Maurizio walks out on Patrizia with no warning. Maurizio decides the best way to communicate this life-altering decision to his wife is to send his doctor friend to her door the next day to tell her her husband is gone and isn’t coming back, hand her a whole ass bottle of Valium, and leave. If one single alteration is made to this scene, if I do not get to watch Stefani Joanne Angelina Germanotta live through this moment at an emotional 10, I will stay put in the theater — only because I will be sobbing and screaming into the air just like Patrizia.

6. The Question of the Mysterious Loan

Here I need the film to answer some questions for me. At one point in his life, Maurizio becomes extremely strapped for cash ($40 million in personal debt!) and in order to pay his alimony payment to Patrizia, he borrows $6,500 from his driver, Luigi. The author casually states that the money loaned by Luigi was “taken from his son’s piggy bank.” I’m sorry? Who is this son? Is he a small child with a piggy bank that has $6,500 in it? Is he a grown man with a healthy savings that he chooses to keep inside a piggy bank. Is Luigi the kind of person who calls a formal bank account a “piggy bank?” Is that a kind of person? I need the film to include a scene clearly depicting the allocation of these funds, or I will have to slip away to the lobby for the remainder of the film to try to find answers myself.

In an effort to teach his daughter, Alessandra, about money, Maurizio gives her $93,000 for her 18th birthday, explaining that it’s her own personal wealth to manage. Patrizia immediately takes the money from her daughter, buys herself a new nose and Alessandra new breasts, then throws her daughter a birthday party so lavish that it not only blows through the rest of the money, but adds an extra $30,000 on top of it. Personally, this is where I get nervous that this is a feature film and not a miniseries. This could be its own episode. It should be! How every moment and detail of this ordeal will fit into a two hour window with so much else to cover, I have no idea. If it’s left out? Well I’ll be on my way to pitch a new show to Netflix before the film is over.

8. Patrizia is an icon

This is my favorite part of the book. It’s clean, it’s simple, it’s iconic. In front of an entire dinner party, Patrizia turns to her lawyer and loudly asks, “What would happen if I killed my husband?” This woman announced her murder plans to an entire party, and then still went through it with. She asks it so seriously that her lawyer drops her as a client. Include it in the film or I picket!

Nothing in the book is more delicious than the descriptions of the 90s, Tom Ford era of Gucci. The glossy lips, the bright colors, the snatched models, the thongs, the thongs, the thongs, and of course, the thongs. Ford threw a Gucci sponsored AIDS benefit at a Hangar at the Santa Monica airport that reportedly featured no less than 40 go-go dancers, all clad in Gucci thongs. This part of the book has literally nothing to do with the murder, but I argue that the amount of stimulus to the Los Angeles economy provided by giving 40 dancers a check for a SAG day-rate is more than reason enough to include it in this film. If it is not, I would be morally obligated to call for a boycott.

At the end of the book (again, spoiler alert) Patrizia is found guilty of facilitating the murder of her ex-husband and former head of Gucci, Maurizio. The week that Patrizia was convicted and sentenced, a pair of gleaming, sterling silver handcuffs appeared in the display window of every Gucci store in the world. I gasped when I read the words. I’ve nary seen such a beautiful example of silent, bitchy, rich people pettiness in all my life. It will be hard enough for me to enjoy this film in spite of the stress I’ll be experiencing, worrying that they may cut this moment from the screen. It should be the final shot, and if it’s not, I’ll leave with everyone else as the movie ends, but I’ll hire a psychic to send a curse Ridley’s way. That’s what Patrizia and Maurizio would’ve wanted.