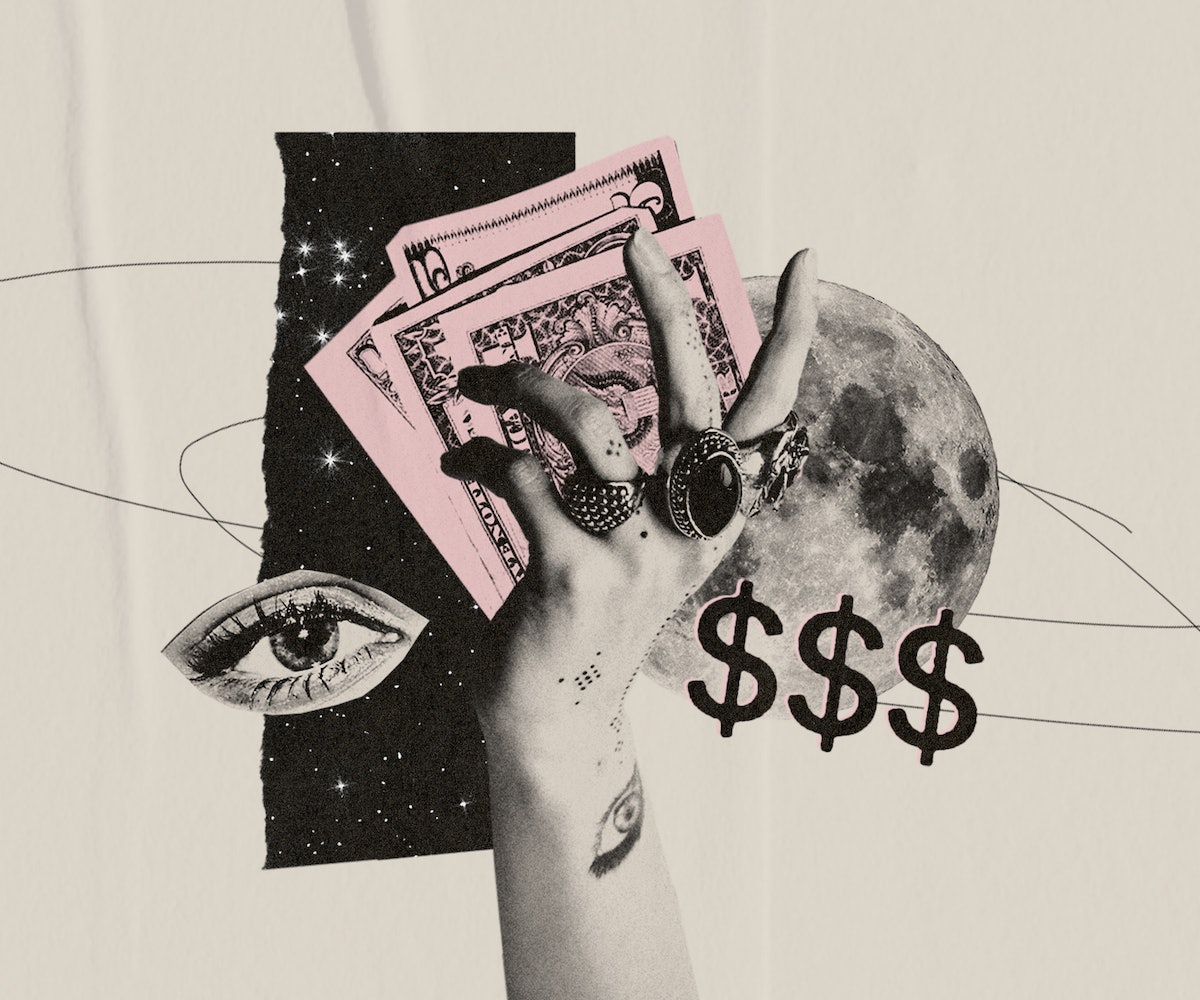 Money is one of the most popular things to manifest for greater abundance, but unfortunately, it’s also one of the most challenging, too. Since money can often be a sensitive subject and major cause of stress, manifesting money might remind you of old pent-up feelings or traumas — these blockages are tricky to overcome, especially if you never really found the closure you needed prior and are just now addressing those buried emotions.

This is a common problem, since most of us have harbored feelings of money scarcity or stress at some point or another. Regardless of time and current financial state, such negativity from the past can linger or trigger feelings you are trying to forget. Manifesting is all about channeling positive energies, with a belief that anything is attainable and possible, so it’s important to not let these emotions discourage you in your efforts for attracting abundance and manifesting money.

But how does one go about doing this? Nylon spoke to manifestation experts to outline what to keep in mind if you want to attract more money.

“When you hold trauma or unprocessed emotional energy in your system, you won't feel safe in your subconscious to receive money, and when you are constantly in a trauma response or in a state of fight-or-flight, you cannot relax,” says Alyse Bacine, a breathwork practitioner and spiritual mentor.

When you’re tense, it’s impossible to attract money and receive rewards, so you must let go of stresses or other obstacles that keep you stuck in the past, such as credit card debt or money owed from a loan.

Of course, you can’t get rid of your debt with a snap of your fingers — but you can manifest and start managing money better to pay it off more effectively, in time. Bacine suggests using the money management app Mint and reciting affirmations in present or future tense while manifesting.

Manifest by saying “I no longer have unpaid bills” or “Debt doesn’t control me,” and take deep breaths, releasing any limitations. Inhale from your diaphragm and breathe steady and slow. Try a three-minute guided breathing exercise prior if you’re struggling to release anxiety and focus.

Address any limiting beliefs and reshape your focus.

Go into manifesting with a clear understanding of which energies you desire and which no longer serve you — for example, positive energies might relate to increased ambition and leadership at work, whereas negative energies might link money with self-worth.

That new role or challenge at work might result in a future bonus. You might be able to DIY your favorite fancy coffee drink or get used to the basic brew from the coffee machine at work.

How would anyone know if you bought your new LBD on a clearance sale, and who are you trying to impress, anyhow? Change your perception to attract abundance by separating money and self-worth — you scored big on savings at that clearance sale and got compliments? That’s a win!

Become a money magnet by manifesting with increased self-worth, less limited thinking, and greater respect of boundaries and monetary means.

Create an anchor for your intentions.

Manifest faster by anchoring the practice to a specific scent or piece of jewelry, which doesn’t have to be expensive to feel luxurious and make you feel wealthier. When exposed to the familiar item that’s tied to the feeling of what having more money might feel like, you can more easily step into its energy.

Think of Pavlov’s dog and the conditioning experiment — being primed for a feeling or reminded of a reward makes it easier to seek and attain.

“I also suggest choosing a specific crystal or crystal jewelry that can be programmed and remind you of your intention every time you see it, such as my favorite for manifesting more money, this Energy Muse’s Money Magnet Bracelet Set,” says Sorel. Sorel suggests citrine, green aventurine, and pyrite — three crystals that attract money, success and abundance.

Keep your crystal in your day bag or wear it as jewelry, as a pendant or ring, or as a scent, so it’s close to you on days when you have a big work presentation or a dinner with a potential new client that’ll seal the deal, for example. And of course, for manifesting money, too. The familiarity boosts efficiency so you get into the manifesting zone faster.

Create a vision board.

Visualize your life with more money and design a vision board using resources like Canva, which is free and easy to use, or Pinterest, says Jenni Adishian, a manifestation adviser, mental health advocate, and the creator of Abundant Collective.

Some things to include on your board might be a color-categorized chart to pay off debt or budget wisely, sparkly images of dollar signs and gold, or cut-out images of things you want once you have more financial freedom, like your dream home.

Include text to complement these visual aids. “Journal out in the present tense how you treat, use, spend, receive money, as the most abundant version of you,” says Adishian. According to Adishian, the “most abundant” you appears once you’ve attained your monetary goals — so, once you’ve paid off debt or landed that raise, for example.

If it helps get you going, you can begin by aiming low. “Your subconscious mind needs to believe that it’s possible, so it’s helpful to start smaller and build up your trust muscle gradually, with your ability to manifest and with the universe,” says Sorel. Start small by setting a goal to deposit a small amount of money into your savings account each week, instead of a large, scary amount right now.

Another tip is to be proactive when setbacks arise and manifest with those feel-good affirmations, as mentioned earlier, to avoid getting discouraged.

Gratitude attracts abundance. “Gratitude energetically puts you in the state of receiving, and this is what attracts the aligned people, places, ideas, and experiences to you,” says Sorel. When you remember how lucky you are, you’re more open to receiving more luck, as well as sharing the abundance. Adishian recommends using a gratitude journal to track entries and monetary actions.

One way to do this is by donating to a new organization and depositing “X” dollars into your savings account with each new deal or secured client, then writing it down in your journal.

NEXT UP
Life
Ask A Witch: Protection Spells For Beginners
Beauty
10 Sweet and Soulful Nail Art Ideas For Cancer Season
Beauty
TikTok Says Painting Nails With Cinnamon Will Bring Abundance to Your Life
Life
Everything You Need to Know About the Summer Solstice