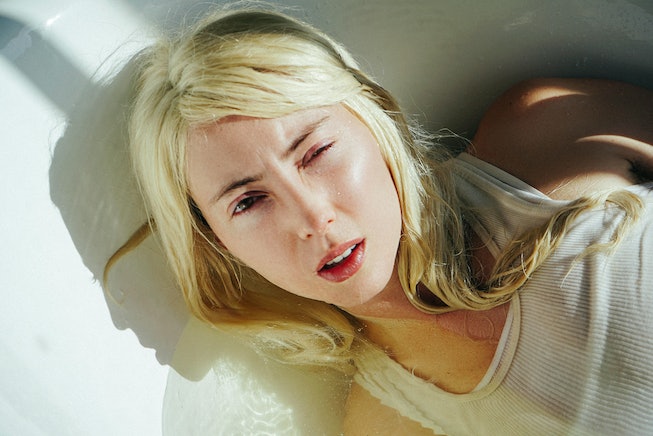 Hayden Dunham wants to try something.

“I thought we could sync up,” she tells me, smiling, her doll-like eyes wide. She’s wearing fuschia lipstick, what looks like a soccer jersey, and her Disney princess yellow hair pulled back with barrettes. “I’m going to try to transfer something to you. Is that OK?” We sit in silence on Zoom with our eyes closed for 30 seconds. She opens hers, beaming. “It might be one of those things that comes later,” she says. “Maybe later today, you’ll be walking and be like ‘Whoa, this image is coming to me. Oh, maybe Hyd sent it.’”

Hyd is the name of Dunham’s music project, under which she’s releasing a new EP of the same name. It’s her first ever solo project, though the 33-year-old artist is a longtime member of PC Music, the London-based music collective and record label known for pioneering a new wave of synthetic-sounding, maximalist, high-concept pop.

Dunham is best known for QT, the project she co-created with A.G. Cook and the late producer SOPHIE, which spawned the 2014 cult hyperpop hit “Hey QT.” Dunham didn’t sing or produce the song (its pitch-shifted chirp belongs to the musician Harriet Pittard), but instead served as the avatar for QT aka Quinn Thomas, a fictional cyborg pop star to whom the song was attributed. Dunham appeared in the single art, on-stage at the song’s few live appearances, and in the Black Mirror-esque music video, which doubles as a commercial for an energy drink called DrinkQT.

“Hey QT” was anti-consumerist performance art, packaged as avant-garde pop, and it was a smash. It spawned a Diplo remix, racked up millions of streams, and inaugurated a wave of new PC Music fans. Since the collective was ambiguous about who or what QT was — and Dunham’s hyperstylized look and uncanny choreography were mesmerizing — for years, people assumed her name was Quinn Thomas, a rising star set to follow in the footsteps of PC Music associates like Charli XCX and Hannah Diamond.

Despite the popularity of her alter-ego, Dunham hasn’t revisited her. She’s been a mostly behind-the-scenes player at PC Music, writing for others and occasionally featuring on Cook’s songs. Today, she’s better known in the art world as a “mysterious ingenue,” per W in 2016. Dunham’s known for large-scale conceptual installations, featuring tactile substances like vapor or tar, and has been exhibited at the New Museum and MoMA PS1. “My visual work and my music are all an extension of the same interest,” she says, “which is connection and building a new world that we can all live in in a new way.”

Dunham is a true eccentric, as unconventional and intriguingly scattered as her résumé. The press release for her EP reads like a JSTOR article summary. Her bio is prose poetry. She speaks in abstractions, repeating similar phases in quick succession with emphasis on different words and asking flows of rhetorical questions. She avoids linear timelines, cause-and-effect statements, or categorizing her work. Asked what the first type of art she made was, she simply says, after some thought, “Vapor. Anything that moves from a solid to liquid. My first pieces were about how a material can transcend its form, how we as humans can move beyond our forms.”

She began working on Hyd in 2017, after an eye surgery left her temporarily blind. “I couldn’t look down,” she says. “I was working on these massive sculptures and had an install that week, so I was just feeling materials with my hands.”

In addition to the logistical difficulty of building sculptures without her vision, Dunham was inspired by the experience and attracted to the immediacy of music to express it. “Blindness was a time of deep waiting,” she says. “Waiting for someone to touch my shoulder, waiting for someone to come with me to a doctor’s appointment. I was involved in a deep listening practice, which led to very clear melodies and lyric ideas.”

Luckily, she was already embedded in a music collective to realize those ideas. Hyd is a PC Music family affair, featuring production from collaborators Cook, Caroline Polachek, and Umru. Hyd is recognizable as a hyperpop release, full of squelching beats and metallic textures. But its four songs are gentler and more straightforwardly confessional than much of the PC Music oeuvre, which typically expresses emotion and ideas in provocatively ambiguous ways.

Hyd begins in the dark, with “No Shadow.” Over severe but sparse industrial production, Dunham renders the loneliness and alienation she felt waiting out her vision loss, also considering the possibilities of feeling, as she sings, “post-you, post-me.” “Am I finally home,” she begs. “Maybe not, maybe now.” At other points, she’s excited by darkness: “The light defines us, a line divides us, the night unites us, all as one, where no one can find us.”

If it sounds like Dunham is glorifying being post-human or transcending her physical form — themes that ring home with several PC Music artists’ work — the next track clarifies that she believes: “We’re just so lucky to have bodies.” “Skin 2 Skin” is a live wire ode to physical pleasure that contrasts crackling ASMR-esque word poems (“Cinnamon, now and then, violin, cellophane, accident, once again, acid rain, hurricane”) with a magnificent, blissed-out chorus: “Do you wanna ride on the slip and slide?” Reportedly, it also includes Polachek, its producer, making car revving noises with her mouth.

“Caroline and I wrote it in New York on a really hot day. We sweated the whole way to the studio,” Dunham remembers. “This song was a body check. We’re asking what it means to be in a body. We’re inviting you to ask what do you need to feel connected? What are your terms for living in your body?”

Dunham sees embodiment, the true subject of Hyd, as an urgent matter since losing her sight. She speaks often of “the next world,” taking it as a given that our current one is corrupt beyond repair. We don’t discuss specifics, though a number of her sculptures consider pollution and toxic chemicals. “There’s so much in the world right now that is toward disassociation, desensitization, being outside yourself,” she explains. “I need to feel as deeply present and connected here, so that I can have agency in building the next world, one that I want to live in and share with the people I love.”

Nothing is more surprising than the final track, “The Look on Your Face” — a guitar pop breakup song that could be by Soccer Mommy or Taylor Swift for that matter. It’s Dunham’s acoustic “Delete Forever” moment. There’s still an A.G. Cook-made synth on the chorus reminiscent of a computer error alert, underscoring moments when Dunham sings in a glitchy stutter. But it’s a simple, earnest broken-hearted pop song at its core — the rare kind where an author lets their contradiction bleed through. “The look on your face is telling me things that I know you can’t say,” she sings. “I know she’s with you, but in my mind, we’re still back at your place.” Both the simple sound and the vulnerability are arresting.

“It was a real rodeo moment in the studio. A.G. and I were very emotionally raw,” Dunham remembers. “It was late and Shania Twain was playing. I grew up listening to country, and we were like, ‘What would Shania do?’”

Maybe I shouldn’t be surprised to hear a PC Music artist make guitar pop inspired by Shania Twain or bare their soul. Dunham sees herself as a part of an art scene dedicated to vulnerability: “That’s what’s exciting about this collective. A willingness to go hard, try hard, fall down, make mistakes, get wild, get weird.”

There’s a number of points where I suggest contradictions Dunham doesn’t see. I ask if she feels whiplash, offering herself up as an artist making direct, explicit music about her experiences when she’s best known for playing a fictional cyborg invented to critique capitalism. She smiles. “It’s not a question of vulnerable or not vulnerable, ironic or sincere. It’s just: ‘How can you come in? What is the vessel that holds you? What do you need to say?’”

Hyd is out November 5 via PC Music.