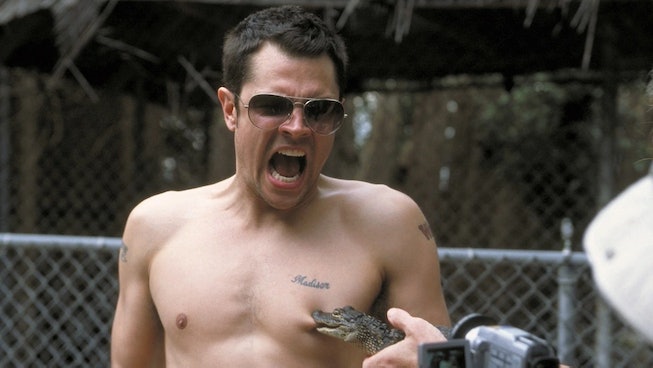 A new generation will soon get to experience the big thrills of Jackass on the small screen for the first time, because there’s nothing more universal than the strange joy of watching humans perform death-defying stunts. Following the massive, somewhat unexpected success of Jackass Forever, which included Machine Gun Kelly and Tony Hawk as guest stars, the suits at Paramount+ are rebooting the iconic MTV series that launched the careers of famed pranksters like Johnny Knoxville and Steve-O.

Though Jackass only ran for three seasons on MTV, from 2000 to 2001 in Fear Factor’s America, it’s a cultural artifact that spawned six films, a video game, and endless “don’t try this at home” warnings.

Jackass Forever was the first of the franchise’s offerings since 2013, and its return elicited emotional responses from fans who grew up watching Knoxville nearly die in a hundred ways. It also performed unexpectedly well at the box office; but it only makes sense that after months of lockdown, a time defined by an expectation to be careful, that a film about doing the exact opposite would massage a muscle a fearful public had been clenching tight. It was also the first Jackass film since the tragic death of cast member Ryan Dunn in 2011 and the firing of Bam Margera from the film after he broke his promise to remain sober during filming.

According to Variety, Paramount CEO Bob Bakish said during the company’s earnings call that the network would be working with Jackass’ creators, but there’s no word yet though if Knoxville will be in the series himself. He told Variety earlier this year that a violent stunt with a bull made him want to slow his roll.

“Those were big [stunts], and could end as badly. Or worse,” he said. “I’ve done enough. I don’t have anything to prove. I have kids to raise. That’s the most important thing.”

He echoed a similar sentiment to GQ, saying, “You can only take so many chances before something irreversible happens. I feel like I've been extremely lucky to take the chances I've taken and still be walking around.”

Meanwhile, Netflix is also cashing in on the Jackass resurgence. Jackass 4.5, a film consisting of extra footage shot during the making of Jackass Forever, will be released on May 20. Watch the teaser trailer, featuring inflatable animal costumes, a swing set (what could go wrong?!) and strategic ducking, below.

NEXT UP
Culture
The Biggest Revelations From The Price Of Glee Docuseries
Culture
Phoebe Dynevor Will Not Return for Bridgerton Season 3
Culture
Succession Season 4 Trailer Explodes With Family Drama
Culture
Angelus Turns 25: The Devastating Twist That Changed Buffy The Vampire Slayer & TV Forever
Style + Culture, delivered straight to your inbox.