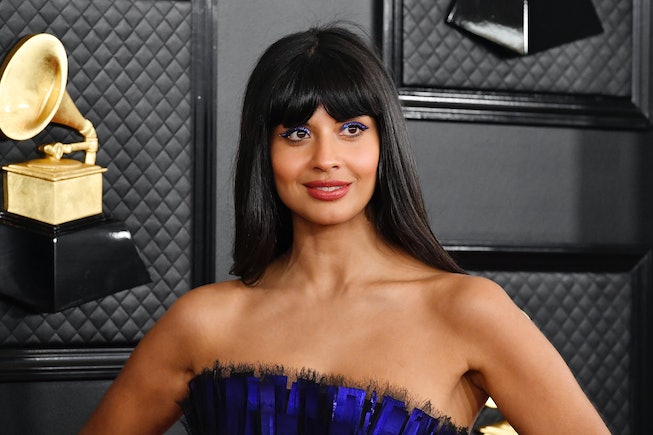 Move over, Phoebe Bridgers and Paul Mescal — the on-and-off celebrity couple du jour is Zendaya and Tom Holland. No social media platform is safe from the many photos of them looking hot and into each other’s eyes at the Spider-man: No Way Home premiere. Fans are undertaking PhD-level analysis of Instagram captions. Another couple with a noticeable height difference, another day the term “short king” gains more power on Twitter. Not only the internet, but infamous internet instigator Jameela Jamil, apparently has some very strong opinions about people’s opinions on Zendaya and Holland’s height difference.

The actor posted a Create Mode grid post reading “Why (the f*ck) do we still care about the height difference between Zendaya and Tom Holland?” (in all caps!) with a caption so long it appears to transcend even Notes-app level commentary. Some of the highlights of the caption include: “Why am I seeing so many headlines where they have to discuss and justify it? This sh*t is just as toxic as when we don’t expect thin men to date large women.” She continued: “When women write ‘don’t talk to me unless you’re over 6ft’ you are just as bad as the men who write ‘slim girls only.’”

Then things turn personal! “I remember boys who liked me not wanting to date me because they were afraid of being judged for being shorter than me. I didn’t care. But they were worried that others would. I’ve dated people of all different heights. Never crosses my mind.” She concludes saying she blames “media and society for this sh*t.”

Of course, Jamil isn’t wrong. Our obsession with height differences in heterosexual couples is boring and a waste of time. It’s more just like, does anyone care that much? Did anyone need a dissertation? Zendaya and Holland have had to talk about their height difference multiple times in the press, (a stupid waste of access to Zendaya, IMO). In a recent interview with Sirius XM, the host pointed out that Zendaya is, indeed, taller. “Not that much taller,” Holland replied. “Let’s put this out there. Maybe like an inch or two at best. It’s not like, people say like, ‘How did you guys kiss? It must have been so difficult.’” Zendaya then sweetly mentioned that her mother is taller than her father.

“I remember when we were doing the Spider-Man screen tests,” Holland continued. “You’d have to ask [director] Jon Watts this question, but every girl that we tested for both roles was taller than me. I wonder whether that was a decision Jon had made. There was no one that tested that was shorter than I was. To be fair, I am quite short. So maybe that was a decision [Watts] made and something he was aware of and wanted to break the stereotype. I think it’s great.” And guess what? Jamil thinks it’s great, too!