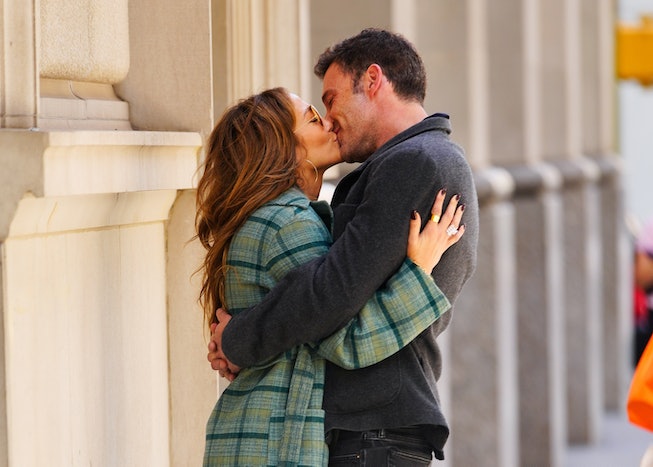 Time has never been more of a circle. Nearly two decades after the couple officially ended their relationship, Jennifer Lopez and Ben Affleck are once again engaged.

Lopez confirmed the story via her “inner circle” newsletter, On The JLo, on April 8, where she posted a tearful video of her admiring her new engagement ring while relaying a succinct message: “You’re perfect.”

The highly-publicized couple was originally engaged back in the early aughts, but called it quits in January 2004. “Due to the excessive media attention surrounding our wedding, we have decided to postpone the date,” the couple said in a joint statement. “When we found ourselves seriously contemplating hiring three separate ‘decoy brides’ at three different locations, we realized that something was awry.”

Lopez and Affleck both moved on with their lives; Lopez mothered twins with ex-husband Marc Anthony, while Affleck had three kids with ex-wife Jennifer Garner. Fast forward to May 2021: A very divorced Affleck rekindled things with a newly single Lopez, who was fresh from a breakup with Alex Rodriguez, and the two soon became inseparable. After many a carefree PDA session, romantic getaway, and red carpet event (as celebrity lovers are wont to do), Lopez and Affleck are now aiming toward matrimony. One second, you’re starring in Marry Me, and the next, your ex-fiancé is asking you to marry him — again! Love can truly be a beautiful thing.

NEXT UP
Culture
Spice Girls May Reunite For King Charles’ Coronation
Culture
The Cutest Couples At The 2023 Grammys
Fashion
Jenna Ortega Is The Face Of Adidas’ Newest Line
Culture
Phoebe Dynevor Will Not Return for Bridgerton Season 3
Style + Culture, delivered straight to your inbox.