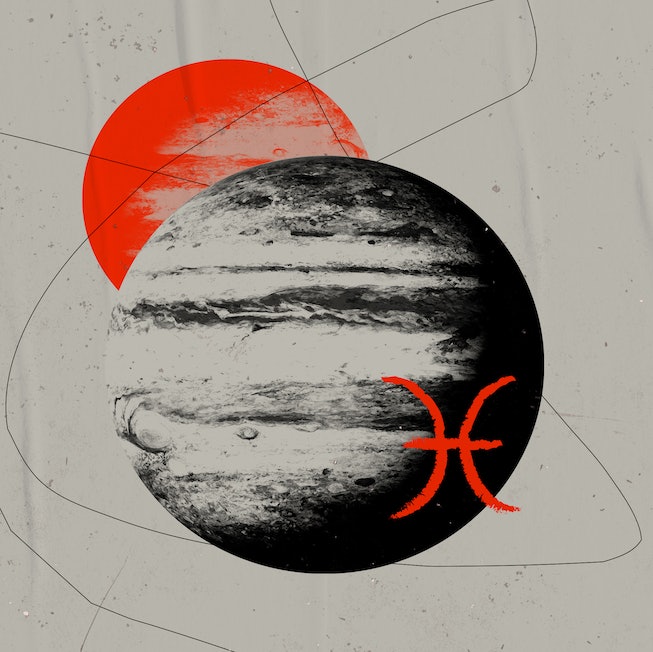 We are, at last, nearing the event horizon, the point when all possibilities of post-pandemic life converge — and, most likely, crash into each other. All portals are open, and sudden abundance can lead to ambivalence. What do you want to do when you arrive?

The tone of every year is set by the movement of Jupiter, the largest planet in the solar system. Named for the king of the gods, who hurled lightning bolts of illumination and awakening down to Earth,. Jupiter (the Roman name of the Greek god Zeus) was known to roam, and rove, and have a good time, regardless of the consequences for his lovers — and from his wife, Juno (Hera to the Greeks). As such, his planet moves with a lust for life that borders on excess. When Venus arrives in a sign, she turns up like Cinderella coming down the stairs of the ball. Jupiter gets off the bus like a college student backpacking through Europe, showing up at the rave with nothing to lose.

Since December of 2019, Jupiter has been bound in Capricorn and Aquarius, the domains of Saturn. Classically, Saturn (or Cronos), was the father of the gods (and, for a time, their devourer), until Zeus and his mother, Rhea, rebelled and claimed the throne. But for the last 18 months, Jupiter has been confined in the belly of father time. Its focus has been put to service in Capricorn’s fight for survival (2020) and the Aquarian dissemination of aid (2021), its natural grandiosity, while its joie de vivre has felt suffocated and smothered under the perfectionism of Saturn.

Jupiter’s essential drive is to go beyond, exploring all facets of higher wisdom and spiritual elevation, which makes the drip-drip minutia of Capricorn, and the architecture of Aquarius, feel like a bore. But that all changes today, as Jupiter returns to its Atlantean resort home, Pisces, for a brief two-and-a-half month vacation, before returning to its studies in Aquarius come August. In 2022, Jupiter will set up shop in Pisces for another semester off, but until then, consider this the summer of love.

The Piscean ocean embodies and enmeshes all knowledge, sorrow and karmic work in a life’s cycle; its empathy cannot be bottled, contained or filtered, for better or for worse. Here, Jupiter can finally roam free, trying on faces like a god in disguise, studying the ruins of the human experiment, and exceeding the boundaries of any single body. Pisces connects all life as one, giving Jupiter a free ride into a 5D matrix of unified consciousness. Jupiter’s bright light, and Pisces’ surging empathy, exposes the suffering of others around the world, making their pain our own. The liberation of one people becomes the liberation of all, and the lessons of disparate movements in the battle against colonialism enmesh and unify. At last, we can lose ourselves in a collective, cinematic ideation of a world that could be, and into the embrace of one another. Send to Robyn Immediately!

With reunion, comes messiness, and so, for a time, we can finally kiss goodbye the era of caution, restriction and boundaries, take our tits out, and dip into enmeshment and the liquid residue of contact: spit, sweat, STDs, and the thrilling collision of particles in the air. We cruise public parks, piss in the streets, and sunbathe in the detritus of failed industry, just as The F*ggots and their Friends always have. You’ve been waiting for this reprieve. The moralistic circuit-breaker is fried, and every decision, especially under a Gemini sun, will manifest as both good and wrong, meaningless and momentous. A new metric of consequences must be developed.

Though this season promises to be a Dazed & Confused movable feast, it’s not without accountability. In the vast tombs of Pisces, Jupiter can explore the lessons of the cycle, and, come the end of May, as Saturn and Mercury go retrograde, you can, with some curiosity, study the systems of your life: the order which dominates you, the people who still have power over you, and the forms of self-expression that still lag behind who you are now.

Who you were — before and during the pandemic — are indeed parts of you, but they are not fixed points to which you can ever fully return. A door (to another door) is opening, but it cannot take you back in time. Since 2018, the not-so-subtle liberator Uranus has been moving through Taurus (for the first time since the years of FDR and the New Deal), challenging our personal and global limitations around scarcity and entitlement. In mid-June, Saturn, in big-picture Aquarius, squares Uranus, forcing a reckoning with the institutions of power, which keep us employed or unemployed, dependent or independent, resigned to stagnation or optimistic about reinvention. Time to let go of the last century, and its ideals of industry. Give up on the linear progression your parents expect of you — of money, success, consumption and waste. You’re part of something bigger now.

You are not going back to your old life, nor are you defined by the coping mechanisms developed during a global plague. With the arrival of eclipse season comes a casting off, be it willing or unwilling, of dead weight. Going down in hyper-personal Gemini and overly-polemical Sagittarius, on May 26 and June 10, respectively, the eclipses will call for a burning away of personal imperatives and moralisms, which have over the last 18 months saved you, elevated you, and shackled you in yet another prison of identity. A death of self is required to pass through the human ocean of Pisces, and to merge with what comedian David Mitchell terms a “multitude of drops.” Let go of the rules and roles which have defined you, and you may awaken to an unpredicted new download. Embrace your role as citizen of the world, but resist the urge to be a spokesperson.

With Saturn and Mercury in retrograde, and an August return of Jupiter to Aquarius, the dust is not yet meant to settle. Nobody is in charge. For this chaotic, constellational twilight, anything can and should be possible. Try everything, and lose yourself in the process. Youth doesn’t always have to be wasted on the young.

NEXT UP
Life
Everything To Know About 2022’s Jupiter Retrograde
Life
Saturn in Pisces Breaks the Noise: 2023-2026
Life
August 2022’s Full Sturgeon Moon In Aquarius Needs Strong Boundaries
Life
Get Ready For A Lucky August 2022 — The Lion’s Gate Portal Is Coming