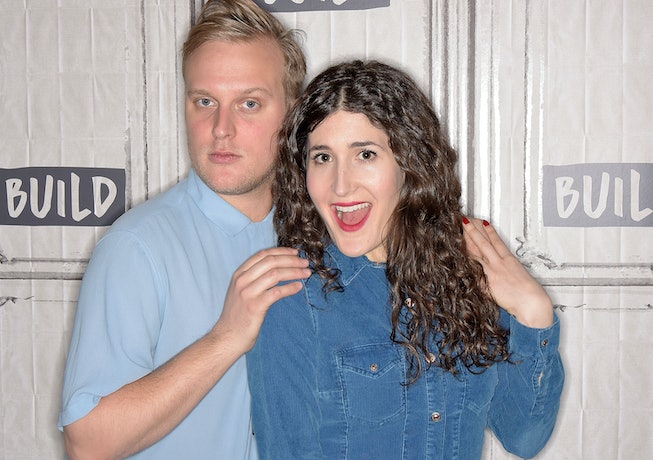 Prepare your abdomens to hurt: Kate Berlant and John Early are reuniting for a one-hour sketch comedy special that someone should have given them a long time ago. Would It Kill You to Laugh? will air on Peacock this July.

According to Variety, the special has the two comedians “playing exaggerated versions of themselves as they reunite after suffering a public falling-out many years earlier” along with some other characters. For an unknown, but I’m sure hilarious reason, TV journalist Meredith Vieira of The View and post-Regis Who Wants To Be A Millionaire? will also be making an appearance.

Berlant and Early will also be reuniting with Andrew DeYoung (Pen15, Shrill), with whom they worked on their hilarious, absurdist Vimeo series 555, who will direct the special. A24 will produce, which is not only fitting for Berlant and Early’s penchant for the absurd, but lends a much-deserved cool credence to the concept of sketch comedy.

“We are eternally grateful to Peacock for giving us this opportunity to make the nation laugh,” said Berlant, Early, and DeYoung in a statement. “The three of us could not be happier to be back together again making a big batch of sketches for you all.”

“This one-of-a-kind special is so brilliant and fun and we can’t wait for our audience to see this magic,” said Katie Hockmeyer, executive vice president of late night programming and comedy specials for NBCUniversal Television and Streaming.

The special won’t hit until it’s at least 80 degrees outside. In the meantime, you can catch up with Berlant’s other works include Sorry to Bother You, which is currently streaming on Netflix and of course I Think You Should Leave with Tim Robinson. (The “Party House” Garfield sketch in Season 1, Episode 6 is an incredible viewing experience.) We also recently learned that Berlant is in three seconds of a 2002 episode of “Lizzie McGuire,” complimenting Lizzy’s bargain bin jeans in a perfect cameo before its time.

And for Early, you can rewatch Search Party on HBO or check out his more recent role in the Apple series, The Afterparty.

But whatever you choose to revisit from the pair, take four minutes out of your day to revisit “Paris,” the 2013 sketch that started it all — a sketch we love as much as we miss Paris.