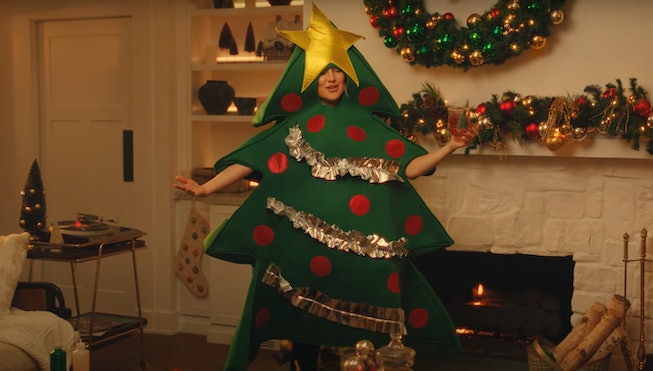 Where’s Kate Hudson been? I stopped getting targeted ads on Instagram for her athleisure company Fabletics years ago, and according to a cursory Google search, she didn’t make any movies between 2017 and 2021 — save for Sia’s Music, but that’s neither here nor there. Turns out, Hudson’s been getting high off Cann Social Tonics, a THC-infused soda that bills itself as the “future of social drinking.” Cann will get you feeling a little goofy, giggly high without giving you a hangover the next day, for when you want to party but you’re also not 23 years old anymore.

In an extended Christmas commercial for Cann released online on Monday, Hudson and former pro basketball player Baron Davis guzzle down Cann’s cranberry and sage cannabis tonic mixed with her King St. brand vodka and have a ball getting cross-faded in her living room. She prances around in a Christmas tree costume and fun little outfits, Davis lifts her up to put the star on her tree, and other yuletide shenanigans. Anyone who’s smoked weed and has a low tolerance for their family antics can tell you that getting a little cross-faded on Christmas is certainly the move — but I’m rethinking all the glasses of red wine I plan to drink in favor of some spiked cannabis soda, which feels a little classier and more festive than sneaking outside for a joint with your cousins.

Darren Criss, who, along with Hudson, is a longtime investor in Cann, also makes an appearance as an Elf on a Shelf, which may or may not be a hallucination from Hudson’s high. It’s double self-promo for him as his new single “Christmas Dance” off his debut holiday album “A Very Darren Crissmas” soundtracks the video. He and Hudson reminisce on their time in Glee together and reference Criss’ Emmy win for The Assassination of Gianni Versace. “They gave me an Emmy and I thought, what next? Elf on the Shelf,” he says. There’s nothing like self-awareness of a sell-out moment!

And while Davis seems like a random choice, he and Hudson go way back. “Most people don’t know that Baron and I were good friends in high school, so it’s exciting to share that and have fun with him on screen!” Hudson told Forbes over email. “King St. and Cann cranberry sage mixed is one of our favorite ways to celebrate together — it’s just the perfect holiday drink.”

Cann was originally created to be a replacement for drinking, but the concoction they drink in the commercial is designed to give you a buzz on multiple levels without being overkill.

“Kate and I developed the recipe for the Cann-berry Vodka to be mild and sessionable, so that if you drink three of them you only consume 6 mg THC and 3 shots total,” Luke Anderson, co-founder of Cann told Forbes. “Instead of being so high that you can’t socialize, or so drunk that you get sloppy, you can experience a delightfully fun buzz without the painful hangover that would come with twice as much booze.” A Christmas miracle!

You can watch the full commercial on Hudson’s Instagram or below: