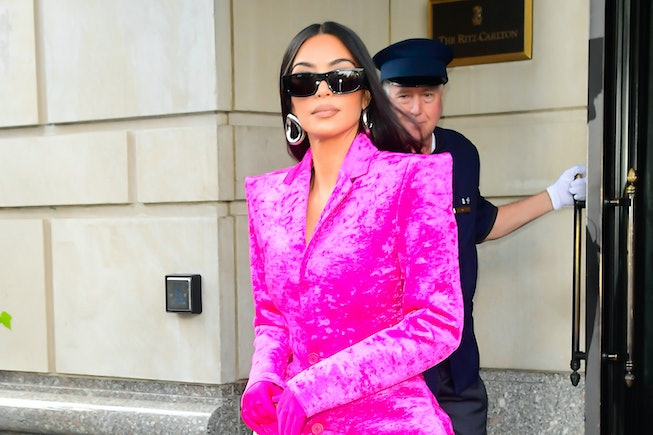 Kim Kardashian is one step closer to following in her late father, Robert Kardashian’s, footsteps. On Monday, the multi-hyphenate added yet another section to her résumé, revealing that she passed the baby bar exam.

Kardashian was elated as she shared the update on Twitter. "OMFGGGG I PASSED THE BABY BAR EXAM!!!!” she wrote. “Looking in the mirror, I am really proud of the woman looking back today in the reflection. For anyone who doesn’t know my law school journey, know this wasn’t easy or handed to me.”

She went on on explain how she failed the test three times in two years, only to keep studying harder until she finally made it happen. The third failure was a bit out of her control since she allegedly was sick with a 104-degree fever while taking the test, but she cheekily noted that she’s “not making excuses.” Since Kardashian isn’t taking the traditional law school route, her journey toward practicing law in California requires her to take two bar exams, this one being the first with a much more difficult pass rate. “I was told by top lawyers that this was a close to impossible journey and harder than the traditional law school route but it was my only option and it feels so so sooooo good to be here and on my way to achieving my goals,” she wrote.

Kardashian elaborated on her studying process, which sounds just as grueling as you’d imagine, including 10-hour days, daily 4-hour zooms, and in-person practice tests week after week. But the payoff is clearly worth it. “My dad would be so proud & he would actually be so shocked to know that this is my path now but he would’ve been my best study partner. I am told he was notorious for making fun of people who didn’t pass on their first attempt like him, but he would’ve been my best cheerleader!”

Kardashian as been keen on helping the wrongfully incarcerated even before she began studying for the bar: In 2018, Kardashian championed on behalf of incarcerated Tennessee woman Alice Marie Johnson until she got a full pardon from former President Donald Trump. Later, in April 2019, the star formally revealed her legal ambitions with an announcement in Vogue, and a month later headlines came out that she had also helped free 17 inmates in 90 days. Her passion for criminal justice and prison reform continues to fuel her. "Hopefully one day I can start a law firm where we can help people pro bono and hire people who were formerly incarcerated," she told WSJ Magazine last month.