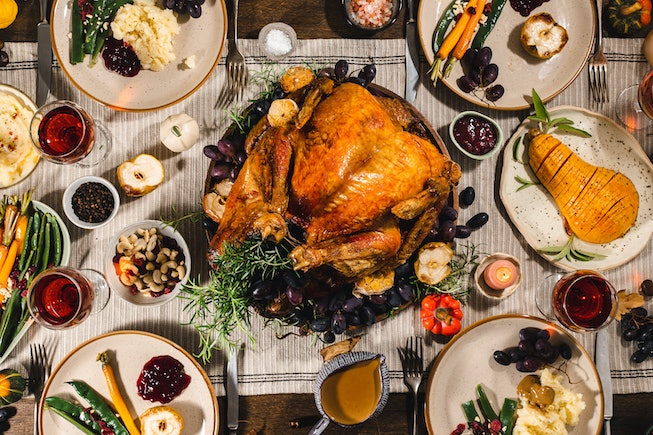 We live in rough times, it’s true. We’re in the throes of climate change; recovering from a pandemic; monkey pox came and hopefully went; gas is still expensive; and HBO Max may or may not shut down. I get it! But you know what we have that no other generation did? The ability to inject cannabis into literally any commercial product on earth. CBD toothpicks? Live your best life! Weed lube? We are blessed! But this Thanksgiving, there’s a gastronomical wonder that is truly deserving of our thanks: cannabis turkey gravy.

I know what you’re thinking: What? But this cannabis turkey gravy comes from Kiva Foods, a company devoted to making edibles that actually taste good. Kiva was founded in 2010, in the early days of legalization, and started making high-quality chocolate bars out of their Northern California home kitchen i.e. not those blonde brownies that some girl passed out to everyone in the hallways on 4/20 your freshman year of college that made you swear off edibles forever. (Just me?)

Now, in addition to chocolate, Kiva Foods has gummies, chews, and espresso bean bites. The gravy will mark the company’s first foray into main course territory, and the company used traditional ingredients like turkey stock, salt, onion, and garlic to create a familiar taste that wouldn’t ruin the turkey. (Though, let’s be honest, can you ruin something that barely has a taste?)

Kiva Foods’ cannabis-infused gravy has 10mg of THC in a package, enough to get you and your loved ones a little loose for that conversation about What You’re Doing With Your Life — or if you simply want to double up on the effects of the turkey’s tryptophan and settle into a nice nap after a 4pm dinner.

And there’s more to be thankful for: Kiva’s turkey gravy is an instant gravy. Simply whisk your way to bliss with one packet of Turkey Gravy powder with one cup of water in a saucepan, making it the easiest menu item on the table to contribute. Need to tamper some family disagreements? Just give grandma a little spoonful! It’s also reportedly fast-acting; taking just two to 15 minutes to get you mellowed out. Alternatively, offer it to your family and while everyone is licking it off their plates, you can use the time to bring up the very important topic of legalization as it related to marijuana crime expungement.

Kiva’s Turkey Gravy is available on kivaconfections.com for $5 per packet.

This article was originally published on Oct. 31, 2022