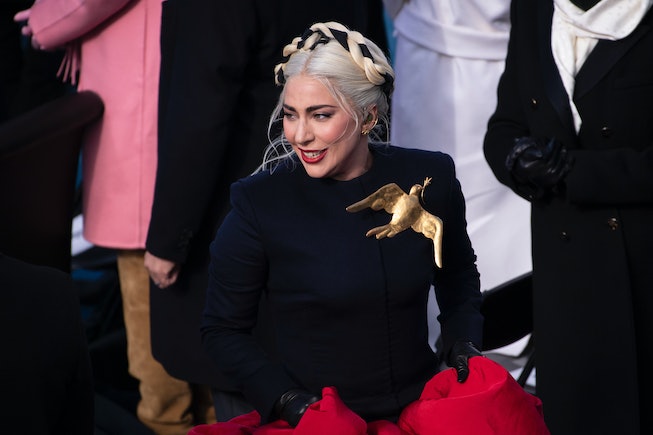 Lady Gaga: Grammy-winning singer, Oscar nominated-actor — and combat journalist?! The singer told British Vogue in a recent interview that if she could have had another job, it would be as a combat journalist, and that she recently deployed some of these skills while at the Capitol before her inauguration performance.

“Singing in a Schiaparelli bulletproof dress,” she says, referencing her Inauguration performance. “I don’t know if people know this about me, but if I weren’t who I am today, I would have been a combat journalist. That was one of my dreams. When I was at the Capitol, the day before the inauguration, I remember walking around and looking for evidence of the insurrection.”

I am obsessed with the idea of Gaga, at 5’ 2” — also the name of her 2017 Netflix documentary showing the glam, exhausting life of the star — running around a battle zone interviewing people and riding on the back of Air Force 1 with aviators and a little notebook. (Do I really know what a combat journalist is? Maybe!)

Gaga is on the press junket right now for (Father, Son and) House of Gucci, Ridley Scott’s stylish Oscar bait film adaptation about the notorious crime case of Patrizia Reggiana, the ex-wife of Maurizio Gucci who was convicted of hiring the hitman who shot him dead. Since its trailer was released last month, the film has had the Internet aflame about the clothes, the Italian-ness, and Adam Driver.

In the interview, Gaga also talked about the intense method acting she embraced for the role, revealing that she “lived as Reggiani for a year and a half,” and spoke with an accent for nine months — even off camera. “I never broke. I stayed with her,” Gaga said.

“It was nearly impossible for me to speak in the accent as a blonde,” she continued. “I instantly had to dye my hair, and I started to live in a way whereby anything that I looked at, anything that I touched, I started to take notice of where and when I could see money.”

But Gaga never met Reggiani, who is alive and living in Milan — and who told an Italian newspaper she was “rather annoyed” that Gaga didn’t come meet her.

Gaga touched on why she didn’t visit Reggiani in the Vogue interview, saying: “I only felt that I could truly do this story justice if I approached it with the eye of a curious woman who was interested in possessing a journalistic spirit so that I could read between the lines of what was happening in the film’s scenes,” she said. “Meaning that nobody was going to tell me who Patrizia Gucci was. Not even Patrizia Gucci.” Gotta love the journalistic integrity!

In case you haven’t been on the internet lately, watch the House of Gucci trailer, below.