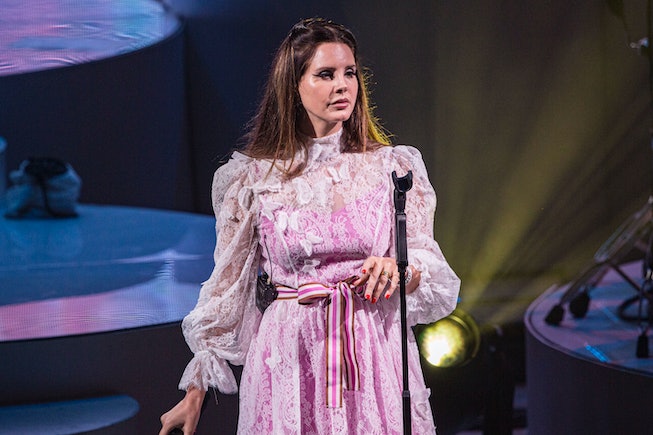 Lana Del Rey, the songstress of Laurel Canyon, was granted a temporary restraining order this past week after she says a woman who had been repeatedly contacting her jumped her fence and dodged her security team to come to her home three times in the last month.

Whether it’s her fever dream videos or the way her emotions fall out of her as yodel-wails, it’s easy to become obsessed with Del Rey. Most of us just don’t take it this far. The woman, Janeen Lee Stratton, who apparently goes by the nickname “America,” (talk about understanding Del Rey thematically), has been texting the singer nonstop and believes herself to be the singer’s muse. (Doesn’t she know that her muse is only and forever the state of California? Does she even listen to her music?) According to TMZ, she also believes Del Rey communicates with her via song.

According to texts in court docs obtained by TMZ, Del Rey’s team repeatedly asked Stratton to stop contacting Lana and her associates with demands to meet her, to which she eventually send the threatening message: "I want to make a scene. Because guess what?! I don't go away easy."

She then apparently drove hundreds of miles to the singer’s house and jumped her fence three times in the last month, and had a couple of pocket knives on her, according to what Del Rey’s guard said in the court docs.

Unfortunately, this isn’t the first time Del Rey has dealt with a stalker. In 2018, one of her stalkers was sentenced to prison for one year. The day after his arrest, she spoke out about the incident at a concert in Atlanta, telling the crowd: “I am actually just feeling a little more emotional than I thought after what happened in Orlando, but I just really wanted to be here with you guys tonight,” she told the audience. “And actually I was feeling totally fine, and then just got, I don’t know, a little bit nervous when I got on stage. So I just want to say that I am super happy to be with you guys, and if I’m a little bit feathery, just bear with me.”

In 2016, a man was sentenced to nearly three months in prison after breaking into Del Rey’s home — and that same year, who got a restraining order against two fans who threatened her and screamed at her in public. God, there’s a lot of fear and paperwork involved in being a pop star.