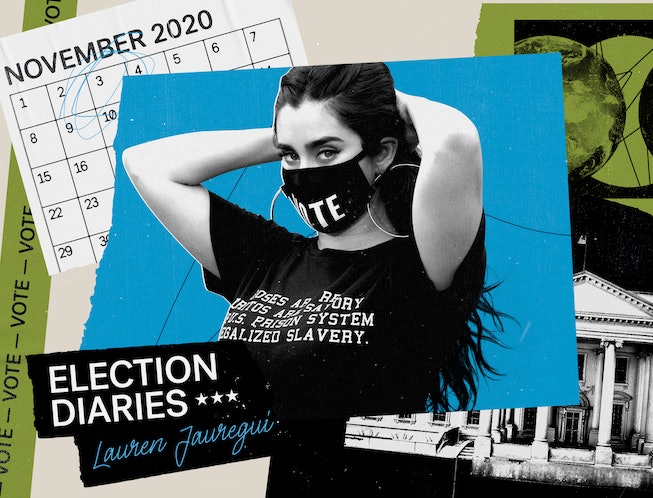 Welcome to NYLON's Election Diaries, a new series of political op-eds. Leading up to the 2020 presidential election, we're asking some of our favorite voices in music, fashion, and pop culture to write down their thoughts leading up to this monumental day, including their hopes, fears, and everything in between. Today, singer Lauren Jauregui talks about fighting for those who can't.

I’ve been spending a lot of time in isolation. Spending time in contemplation as I watch what was the world I thought I knew take on its truest form. What does it mean to be poor? I’ve found most of us think of this concept in the material sense. How much we have at our disposal at a time to spend on things we don’t need to impress those whose opinion about ourselves we value more than our own. Our society. Or at least the people whose acceptance will win us a place in this world, a sense of belonging in a loveless wasteland of unfulfilled dreams and empty promises. I feel a sense of urgency in the young ones especially. A yearning for a place to belong. A sense of freedom beyond compare. A deep realization that most of the things we thought were ours without question, can be taken away without question and no one will question until there’s tangible proof through his-story’s lens. And then we repeat the cycle again until we all wake up; if we ever wake up.

I’ve been thinking a lot about the poorest people I know. Again, most will think I mean of monetary stature, but no, I mean of character. In this America I see around me, this “United States,” this “Land of the Free,” this “Home of the Brave," “This land is your land, this land is my land” isn’t really our land and most aren’t very free and the ones who are brave are thrown in cages and we call them criminals or aliens because we cannot understand where their feet or hearts have been. We debate worth like it’s up for a conversation, we debate whether state-sanctioned violence is worth the emancipation from or not. We debate with the same tired give and take, back and forth, right or left, wrong or right, black or white and we fight and we fight with everyone but the common enemy at large.

They lay in the dark. They sleep at night with their hearts sitting up on their mantels above the fireplace; right below the carcass they display as art. That’s where they stay, indifferent and dead; the heart and the people who say that this is all there is. That there are only two ways to go. That there is only this or that, up or down, left or right, right or wrong; as if it all is not part of the same existence. As if we don’t already know what these systems do. As if they haven’t been working just fine since their inception. As if creators, scientists, healers, artists, thinkers, authors, and poets do not exist and colorfully lay out the truth of their experience decade after decade through rhythm, song, dance, expression, research, protest, riot, relentless opposition to the machine that is killing us all slowly and methodically. The leftovers of colonialism and the diaspora of its refugee victims. And you cannot see it because you are colorblind. The shades of the Earth are what paint our skin because she is our mother. And we rape her like we rape our mothers, wives, lovers, and daughters, except we still haven’t used the excuse that we have mothers, wives, and daughters to justify why we couldn’t possibly have done it. We do it anyway. We know what we do and we do it anyway. For convenience’s sake. We take her for granted, each other for granted, life for granted, our endless abundance in this realm and in this world and in this country for granted by granting the few who knowingly choose to steal and lie to the destitute for profit, the power. Perpetually seeking to rule the kingdom they hope to arrive to. Ever so always just out of their grasp. Never enough.

But the rest of us? We have another chance to fight back.

We have one more shot before this goes where we cannot stop it. Your heart has never lied to you and neither do the stars, they guide us back to ourselves, they show us who we are and where we’re at. Listen. Wake up to what is in front of our faces. History has told this one before, this is not about opinions or political affiliations; this is fascism at our doorstep, creeping in like the cold of fall. It’s so much bigger than f*cking voting. This is only one step of a long and painful journey. This is not a familiar time. This is not something that has happened before, but it has. We have the power in our grasp if we can all just care about each other for once in this individualist place. When all is said and done, don’t you want to be able to say that you were one of the ones who did absolutely everything they could?