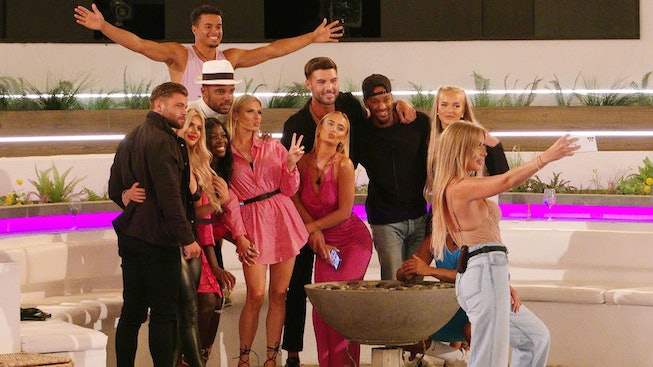 Everyone knows that summer technically starts on the June 21, but for a sick subsection of society to which I sadly belong, it doesn’t officially start until the day that five tanned women wearing tiny bikinis and five toned men (ideally) over 6 foot walk into a Spanish villa with tacky neon signage, and proceed to “couple up.” A summer solstice for those of us who love gossip and secretly hate ourselves, if you will: Love Island 2021.

Before we begin, an important disclaimer because more and more people have seemingly forgotten how to act, especially online: This is a ranking based on contestants we have seen portrayed in a heavily edited and sometimes scripted reality TV program. None of us really know anything about any of these people outside of this small glimpse we have been given into their personalities, so please read this in the spirit of humor and not as a reason to start sending strangers that you have never met death threats. Thanks!

Love Island 2021 kicked off with a bang with Shannon’s fantastic ass. Unfortunately, she was there only long enough to provide some hot girl representation in her pre-bedtime pillow spray spritzing — before being unceremoniously dumped from the island for...being too hot I guess? RIP queen, hope your Twitch fans appreciate you as you deserve.

To put it simply, Millie just seems like the kind of girl you’d want to be best friends with — she’s honest in the right way, has a great wardrobe, and is always up for a laugh. Plus, I have a theory that she’s secretly been getting stoned in the smoking area, so I love her.

A third-rate Ariana Grande from the Home Counties, Lucinda was the bimbo bombshell we needed but didn’t deserve in this misery-wed season. She sent Brad home, cried for a day while dramatically wearing a black hoodie, and then cracked on to Aaron, and then Danny, and then Aaron again, all while allegedly having a boyfriend at home in the UK. Iconic! The biggest let down of this season, for me personally, was the fact that she got sent home just before Casa Amor, leaving us with four days of footage of the other girls grieving like war widows instead of cheating on their trifling partners with the newer, better men.

At some point between Toby’s first and fifth re-coupling, I hated him more than I have ever hated anyone on this show. By the time he’d found his way back to childhood sweetheart Chloe, he was somehow my favorite boy in the villa, if not my favorite contestant. In the space of eight weeks, we watched Toby grow from an overwhelmed, ricocheting boy in a sweet shop to a young man who when confronted with another man wanting to take his babes on a date, sagely responded, “Of course he does, she’s a very attractive girl.” I want a UK version of The Bachelor commissioned immediately just so I can continue to watch him blossom.

I lost some love for Kaz during her post-Casa clown era, but ultimately, her color-coordinated eyeliner and outfit combos, eloquent arguing skills, and friendship with Liberty place her firmly in the hero column. Also, her bum.

The only person to display a modicum of self-respect during the course of this wretched season, and calmly walk away from a situation that wasn’t serving him. Too good for any of these people to be quite honest!

Chloe arrived in the villa as the first bombshell, and quickly went from one of the most annoying contestants to quite likable to a man-stealing harlot, then a woman who took her own karmic dumping with grace, cracked on as a hilarious legend and one half of the only couple I care about in the villa. My own personal favorite moment was not in fact “I won’t let anybody take me for a prick — neau WHEY!” but a lesser noticed instance where she was looking in the mirror, doing gun-fingers and saying “Yeh yëh f*ckin yih!” to her own reflection. A Libra icon!

Our moms had Princess Diana, and we have our precious angel, Liberty.

A handsome man with a kind and forgiving nature, who unfortunately used these traits to end up as a literal footstool for Babylon. The definition of “going out sad.”

Ostensibly done dirty by Tyler, Clarisse promptly got rid of any good will I personally extended to her by leaving the villa and immediately running to the tabloids to argue that Tyler wouldn’t have chosen Kaz over her in “the real world” whilst liking shady Instagram comments. We saw him pick her over you on national TV, babes, so what now?

Please, producers: no more posh people in our hallowed villa. If I wanted to listen to people complain about cheese and wine pairings in an accent that offends my very being, I would watch Made in Chelsea.

Although technically part of the boring posh cohort, Hugo is a villain in his own right simply by virtue of how much of our collective time he wasted by applying to the show without even a teaspoon of sauce to his name. THIS IS NOT FRIEND ISLAND!

Faye’s main problem is not her painful-to-watch insecurity, but that she is a reality TV contestant better suited to a time before we discovered things like mental health and #beingkind. Faye is 2004 Big Brother, which ultimately makes her a terrible Love Island contestant. Separately, it would be great if people stopped confidently labeling people they don’t know as “abusers” just because they shouted at someone on TV for a bit!

My initial delight at being presented with a hunky laborer with a Geordie accent (i.e. a man very much in men’s business) was quickly overshadowed by Brad’s actual personality. Never has a man spoken so much while saying so little that interested anyone.

A man who is incredibly self-aware in the context of being a contestant on a reality TV show, but who has zero self-awareness when it comes to interpersonal relations — which is a problem when the game show you are on is explicitly about how convincingly you nurture and navigate your relationships.

Proof that men should not be over a certain height because it means that they are able to get away with anything simply by virtue of being big, tall, and hot enough to pick up their long-suffering girlfriend and carry her around.

There is nothing worse in this world than a man who gets visibly excited by the prospect of a woman picking up the bill (finally some feminism I can get behind, am I right fellas?) except maybe a guy who then finds himself put off by ambitious women. Where do you think the money comes from, Aaron?