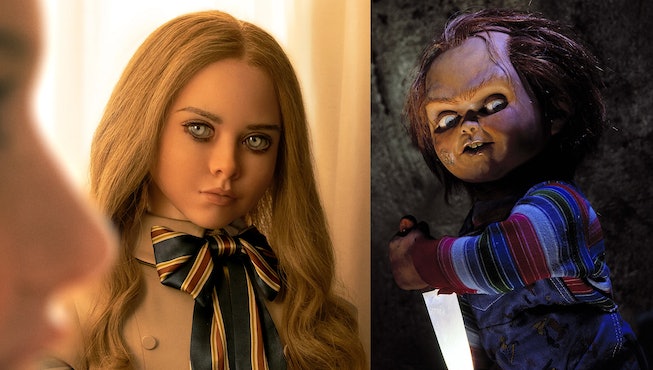 There is no film we’re more excited for in 2023 than M3GAN, the horror film about a robot doll from the depths of the uncanny valley built to be a companion for a lonely orphan, who then turns out to be a killing machine.

The trailer for the film was released this week, setting the internet ablaze with commotion around M3GAN’s already-viral crazed dance moves, set to Taylor Swift’s “It’s Nice to Have a Friend,” injecting a whole new creepiness into the already robotic melody. Fans lost their minds further upon learning that M3GAN is voiced by Jenna Davis, known for the viral, deranged earworm TikTok “Penny Nickel Dime.”

M3GAN has already become a bona fide star overnight. And like a good little robot celebrity, M3GAN knows how to stay relevant: through Twitter beefs. And who better to beef with than one of her own? Chucky, horror’s most famous and terrifying child. (Though in her defense, Chucky started it.)

“[E]verybody's tryna be me,” Chucky wrote in a quote tweet for the official M3GAN trailer, to which she replied “u know u that doll when u cause all this conversation,” with a GIF of her removing a pair of sunglasses.

The Chucky account also reposted a tweet from FaceTune showing M3GAN and Chucky as a side-by-side before and after. Um, M3GAN is gorg! And more shots were fired when Chucky challenged M3GAN to call him when she could turn her head 360 degrees in one of the creepiest character dexterity details of all time. All of this started a few days ago, when Chucky wrote “word to the wise: don’t f*ck with chuck,” to which M3GAN responded, “lol chucky plss.” Sometimes Twitter is such a wonderful website, it’s hard to believe all this entertainment is free.

We will certainly be following the ongoing horror doll drama with bated breath as it unfolds. After all, ‘tis the season. M3GAN sadly won’t be released until January 2023, but on the bright side, it buys her and Chucky plenty of time to keep beefing and creating viral marketing. In the meantime, you can rewatch the bananas trailer again and again, and if you listen closely enough, you can hear the Slack pings of network execs already planning a Chucky vs. M3GAN movie. Here’s hoping!