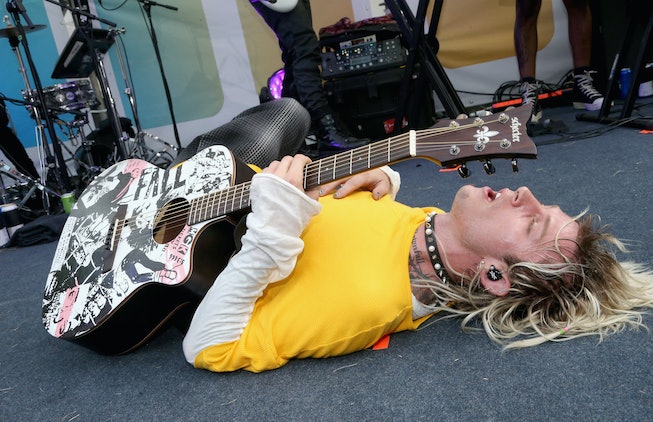 The pop culture hit-making machine might finally explode today: pop-punkers Machine Gun Kelly and Mod Sun are directing a stoner comedy called Good Mourning With A U, an extremely emo movie title that could easily double as the name of a new Jxdn single.

There’s zero information yet about what the movie is about — but does anyone really care? It’s big enough news that the harbingers of the pop punk revival are skating their way into stoner comedies, a subculture just a couple degrees from pop punk. The film stars Machine Gun Kelly (who is credited as Colson Baker), Mod Sun (who is credited as Mod Sun), MGK’s beloved girlfriend Megan Fox, Dove Cameron, Whitney Cummings, GaTa, Becky G, Zach Willa, Jenny Boyd, and Boo Johnson, with a performance by Saturday Night Live’s hottest export, Pete Davidson. Fingers crossed for an Avril Lavigne cameo!

“We’re just happy to be bringing our vision to life,” said Mod Sun and Machine Gun Kelly in a statement. “We’re humbled by the trust we have from our cast members and crew.”

While we have a lot of questions about what exactly that vision is, all we really know now is that filming is underway in Los Angeles, so Pete might be disappearing from New York City Tinder soon.

This isn’t Machine Gun Kelly’s first foray into acting. He was also in the highly underrated 2014 film Beyond The Lights, had a cameo in Davidson’s film King of Staten Island, and met Megan Fox on set of Midnight in the Switchgrass. (Though he tweeted in July that the movie, which is about a serial killer known as the Truck Stop Killer is *trash can emoji* — which is bit rude to Megan, to be honest!) MKG is also in the upcoming and final Jackass Forever, which dropped a bonkers trailer earlier this summer.

He might think his own movie sucks, but MGK is on one this month. A couple of weeks ago, he announced the name of his next album via a matching tattoo with Travis Barker. The aging punks posted a video to Instagram with “born with horns,” tattooed in Gothic type across their forearms. He also released the album’s first single “Papercuts,” along with a music video earlier this month. Please god, don’t let he or Megan get a tattoo that says “Good Mourning With A U.”