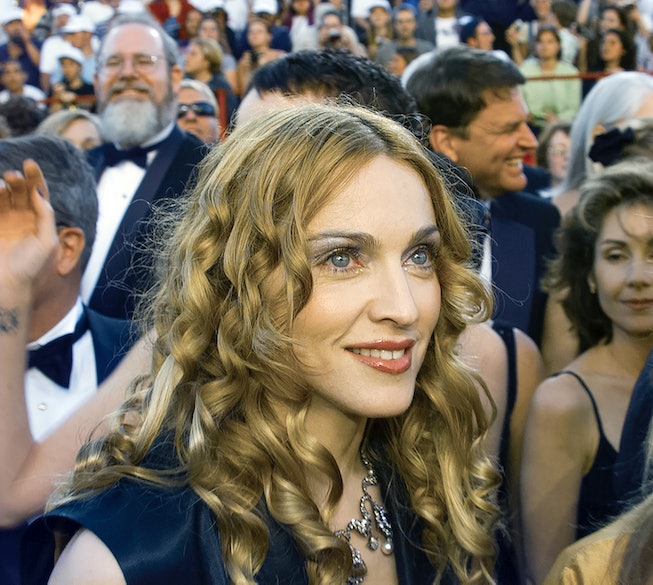 Madonna is long overdue for a biopic. But on January 24, it was announced that, despite being cast, the film is officially scrapped. As reported by Variety, who credit multiple sources, the film is no longer in development with Universal — a decision that came as the singer is preparing for a world tour.

Tickets went on sale last week — with tickets selling out for shows in New York, London, Paris in minutes. According to Variety, she remains committed to making a film about her life one day, but her sole focus now is the tour.

In recent years we've gotten Oscar bait films for the likes of Queen and Elton John, but it felt like time for the queen of pop to have her story told in a revisionist way that, even if it shows ups and downs, will ultimately all make us feel better in the end. There’s so much to mine from Madonna’s life, and like a true iconoclast, she never went away. The film was set to culminate in her landmark 1990 Blonde Ambition tour, though “Hung Up” and “Like A Prayer” will always blast on speakers at gay clubs.

Here’s everything that we knew so far about the Madonna biopic, which may one day still see the light.

The film has been in the works since 2020

In 2020, Madonna confirmed she was set to co-writer and co-direct a biopic based on her life, saying she wanted to be heavily involved because previous projects about her life had been created by men. “The reason I’m doing it is because a bunch of people have tried to write movies about me, but they’re always men,” Madonna said in October during an appearance on The Tonight Show Starring Jimmy Fallon.

Originally, Juno writer Diablo Cody was originally signed on as co-screenwriter, but later backed out. Also writing the script is Erin Cressida Wilson, a playwright and screenwriter who wrote Girl On The Train and is working on an adaption of Ottessa Moshfegh’s debut novel Eileen.

It involved a grueling audition process

According to casting director Carmen Cuba, the actors participate in 11-hour-per-day choreography sessions with Madonna’s choreographer, Madonna, herself, readings with Madonna, and singing auditions. “You have to be able to do everything,” one person with knowledge of the process told the Hollywood Reporter in March.

Were there any hot, young stars not under consideration?

According to the Hollywood Reporter, Bebe Rexha and Sky Ferreira were previously considered, along with Sydney Sweeney, as W Magazine reported. After Julia Fox was photographed dining with Madonna herself, rumors began swirling that she was in talks to take on the role of the pop star’s best friend, Debi Mazar. The actress wasn’t opposed: “I’d obviously be flattered,” she said on Instagram.

But one actor beat them all out

Julia Garner has emerged as the top choice to play Madonna, as reported by Variety. Garner is most famous for playing Anna Delvey, an icon of history, in Netflix’s Inventing Anna, and adding Madonna to the mix would certainly cement her as queen of the biopics. Garner is expected to accept the role. (We hope so, after grueling, 11-hour-long audition days spent with Madonna’s choreographer.) It’s not clear yet if anyone else has been cast.

Madonna was “whittling away” at the script

In an interview with Variety, Madonna says she’s currently editing the script, a process that’s proving tedious, to say the least. “I have a very long script that is really hard for me to make shorter,” she said. “I’ve been whittling away at it, but it’s like hacking off my limbs.”

Madonna also told Variety it was important that she be the one to make her biopic, though many filmmakers were vying for the right to take it on for themselves.

“I’ve had an extraordinary life, I must make an extraordinary film,” she said. “It was also a preemptive strike because a lot of people were trying to make movies about me. Mostly misogynistic men. So I put my foot in the door and said, “No one’s going to tell my story, but me.”

This article was originally published on April 28, 2022