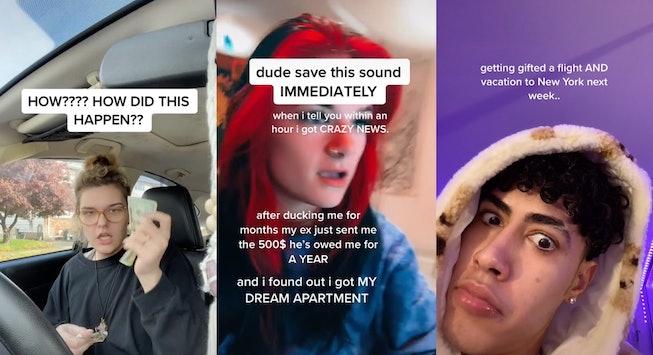 After saving a TikTok sound to their drafts, one TikToker found, like, $400 on the ground. Another got the part she auditioned for in a Netflix show. Another got her dream gig as a ventriloquist at Radio City. One girl got the job she interviewed for and found a French bulldog, while another had a good first date.

TikTokers are posting videos crediting their sudden good fortune to the song, “Time In Oblivion,” explaining that not long after they saved the song to their drafts in the app, something good happened in their lives. While some in the comments are referring to this trend as “Gen Z chain mail,” you can’t deny there’s some kind of magic at work. Using the song is a form of manifesting, which has become more popular on TikTok in recent months, with the hashtag #manifestion garnering 11.1 billion views. TikTokers have manifesting techniques for making pretty much anything you want happen, whether it’s getting more money, the perfect boyfriend (a waste of manifesting power, imo!), or your dream job.

The sound “Time in Oblivion,” by the artist iANO, for whom I can’t find any social media, has been used in 241,400 videos as of November 17. Many users in the videos expressed having skepticism before sharing what good thing happened to them, which includes everything from free flights to getting a boyfriend “out of nowhere.”

Haters in the comments are quick to point out something called confirmation bias, or the Law of Attraction, which is the tendency to seek out information that supports our beliefs. That’s not all that different from intention setting, or manifesting. Other skeptics have suggested the sound is probably a marketing scheme from the artist, which is also fair, though the artist, as stated, appears to not have any social media.

But regardless of the psychological mechanisms behind the sound working — whether it’s coincidence or confirmation bias or simply that we only see videos from a small slice of people the sound “worked,” for — good things are happening for a lost of TikTok users and you have nothing to lose by saving the sound.

The impulse to believe that a sound clip can change your life comes from wanting something to believe in — an impulse maybe best described by the TikTok user @youngkaiju, posted a video of him using the sound after having a very tough year that included a breakup, burnout, and losing $20,000. “I actually don’t believe in miracles normally, but that’s why I’m trying,” he said in his video.

In a later video, he responded to a comment that asked, “Bro ur in ur 20s how do you still believe this,” to which he replied: “I don’t know it all. Nobody does and believing in something like that doesn’t harm you. It doesn’t hurt you. It’s doesn’t do anything bad or negative towards you,” he said. “We live in a messed up world and having something to believe in is sometimes nice.” He also posted a screenshot of his stock portfolio — it had gone up 400%.

NEXT UP
Culture
TikTok’s 2022 Discover List Is Here To Freshen Up The #FYP
Culture
On The List (With Melissa Rich): Is The Party Venue Recession Upon Us?
Beauty
Invisible Eyeliner Is TikTok’s New Soft Makeup Trend You Need To Know
Culture
Allie Rowbottom’s Novel Aesthetica Isn’t About Instagram — It’s About Survival