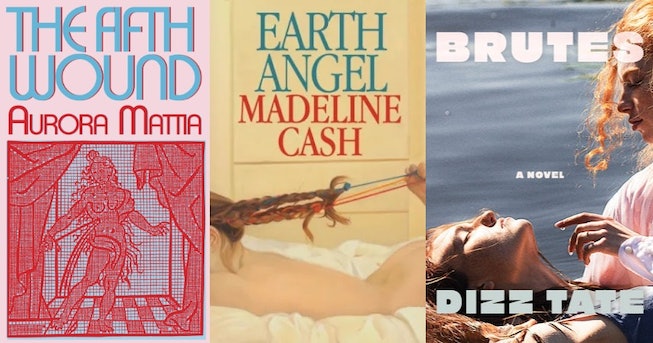 Heidi Montag said it best when she tweeted: “There is just something about holding a book.” So true...and a new collection of titles coming out in 2023 will inspire the same Montag-like devotion to the hobby of reading.

The books we’re most excited about in 2023 include a stunning collection of sharp debuts, sensual romps into nightlife, and tender and reckless coming of age stories. We’re excited about everything from Earth Angel, the debut short story collection of Forever Magazine’s Madeline Cash, about godlessness and digital life, to Dizz Tate’s debut novel Brutes, set in A24’s version of Florida, to an anthology of writing from Black punks. In short, it’s going to feel especially good to hold a book this year.

“There is a girl, and her name is Sam,” begins this tender coming-of-age novel that touches on the pillars of growing up — you know, like class, addiction, lust, and following one’s own dreams. It follows seven-year-old Sam through her life as a teenager where all she wants to do is go climbing and wear the right kind of jeans, begging universal questions like what happens to a girls’ sense of joy and belief in herself as she becomes a woman?

Set in 1981 Los Angeles, Bret Easton Ellis’ first novel in over a decade follows a group of friends during their senior year at an exclusive prep school. All Xanax and Porsches, innocence is lost and paranoia grows while a serial killer preys on the San Fernando Valley, targeting teenagers — and seems to be growing closer to the group of friends.

In this debut coming-of-age novel that brings to mind Virgin Suicides if it were set in A24’s Florida, the preacher’s daughter goes missing, and a group of thirteen-year-old girls become obsessed with the mystery — uncovering a dark secret about their town that will haunt them forever.

“Dyscalculia” is a disorder that makes it difficult to learn math (raise your hand if you also have this!), but that childhood diagnosis becomes a useful framework for Camonghne Felix in her adulthood — particularly after she goes through an earth-shattering breakup that lands her in the hospital. It’s there she unwinds childhood trauma and past heartbreak through the lens dyscalculia, making her ponder what else she’s miscalculated in her life.

A genre-flipped reboot of the 1970s film Taxi Driver, Priya Guns’ fiercely satirical dark comedic novel is about a ride share driver barely holding it together. Broke, alone, and on the hunt for love and financial security, she finally lets down her guard in love, only to have her girlfriend do something unforgivable — and everything explodes.

In this sensual coming-of-age novel, a young woman meets a man 20 years her senior while on vacation in an isolated Australian coastal town. She’s drawn into his simple life — a salve for her chaotic upbringing. But after she witnesses something strange, she becomes unmoored, questioning everything she thinks she desires.

Mae is 17 years old in 1966 New York City living in a run-down apartment with her alcoholic mother and her mother's sometimes-boyfriend. She drops out of school only to be hired as Andy Warhol’s typist, in a coming of age romp through the countercultural movement that explores nightlife, art, and independence.

Laura Cathcart Robbins, host of the podcast The Only One in the Room, has written a propulsive addiction memoir that has her going from stockpiling pills in her Louboutins and popping them in between PTA meetings to facing divorce and a custody battle. As Robbins tries to undo the choices in her life, she must work through self-sabotage and internalized racism to face her years-long drug addiction.

Crystal meth crisis meets Bay Area gay culture in this compelling memoir by Jason Yamas, a film producer who finds himself in control of the entire market for San Francisco’s gay community — where he meets a cast of decadent parties who turn the concept of “who a tweaker is” on its head, showing him a kind of deadly nirvana.

A time-bending neo-noir novel in the vein of Ling Ma’s Severance, Flux is about the lives of three men undergoing loss, whose lives converge when a 28-year-old uncovers a time-traveling conspiracy at his new place of work that’s being used to cover up a network of dark secrets.

In this riveting book of short stories by cult favorite Japanese sci-fi author Izumi Suzuki, the classic concepts of sci-fi and fantasy get chopped and screwed: A cheating husband receives a bestial punishment from a wife; bored high school students discover another dimension, but aren't all that impressed; and space pirates find a mysterious baby in outer space.

This collection of eight contemporary short stories from Kenya and Tanzania, all translated from Swahili, follows tales of Nairobi junkyards, cross-country bus rides, and spaceships that blast prisoners into eternity, examining life as we now know it and exploring vivid Afro-futurist visions.

The glimmering debut short story collection from Forever Mag founder Madeline Cash promises an exalted collection of stories about godlessness and digital life, including the stories of Isis recruit, an adolescent beauty queen, an app that throws a slumber party for a friendless office worker, and a story exploring the architectural consistency laws in Laurel Canyon.

What do we do with monstrous men? Claire Dederer asks this in her latest work, a non-fiction work exploring what we do in the wake of uncovering horrific acts from some of the artists we love the most, asking the wiry, murky questions: What does female monstrosity look like? Does monstrosity serve art? How do you balance moral outrage and love of the work?

The Three Of Us by Ore Agbaje-Williams - Penguin Random House, May 16

Taking place over the course of a single day, this bold, sharp debut novel explores the intrigue of the ménage à trois in a comedy of manners about the tensions between a husband, his wife, and her best friend.

A Trans Man Walks into a Gay Bar by Harry Nicholas - Jessica Kingsley Publishers, May 18

Harry is a single, transmasculine, and newly out gay man who recently broke up with his girlfriend of five years. In his raw memoir, he talks out what the experience of self-excavation was like, exploring Grindr to sauna sex, and all the joy and messiness in between.

Model-turned-producer Geena Rocero wrote a heartfelt memoir of her life as a trans pageant queen from the Philippines who went back into the closet to model in New York City — until she realized she felt most powerful living her truth as the iconoclast she’d always been.

In this fever dream of a novel, two sisters in Los Angeles share a bag of pills at a nightclub causing one of them to commit an act of drugged-out violence — just before the other disappears, leaving one to figure out what happened.

This comprehensive anthology of contemporary nonfiction, fiction, illustrations, and comics encompass what Black punk’s past, present, and future is — including contributions from influential writers like novelist Brontez Purnell and critic Hanif Abdurraqib.

From the author of Milk Fed and one of the best writers on Twitter comes a comic novel about grief that becomes a story of survival in the California desert.