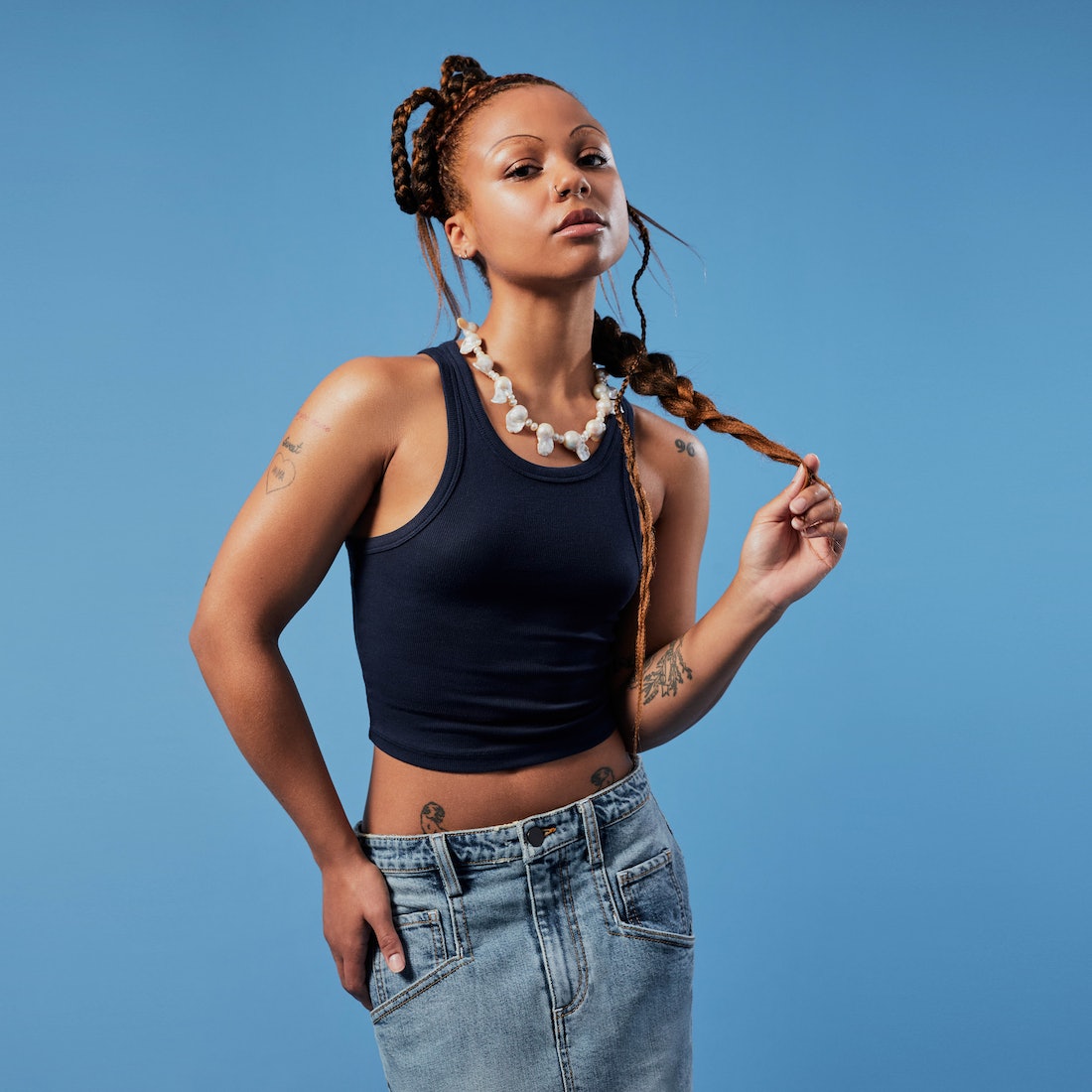 All Bets On Myha'la Herrold

With 'Bodies Bodies Bodies' and a new season of 'Industry,' Myha’la Herrold’s stock is going up.

Last summer, Myha’la Herrold was fighting for her life in the 40-mile-per-hour winds of an upstate New York hurricane. The storm may have been simulated and part of the set of Bodies Bodies Bodies, A24’s forthcoming satirical whodunnit, but that didn’t mean things weren’t getting real for Herrold and her co-stars.

“The universe was trying us with that one,” she says. “We were shooting in the middle of the night and it's an actual hurricane simulator, it's not like they put the rain in post. The wind was 40 miles per hour and there's all this rain and debris and we're getting smacked by trees and actually falling. And actually falling. They would call cut and we'd all run across the set into a tent full of these rocket heat blasting things because we were freezing our little tushes off.”

Trying meteorological circumstances aside, Bodies feels like the destined next move for a career ascent. Herrold, who studied musical theater at Carnegie Mellon and previously acted in the Broadway production of The Book of Mormon, pivoted to film and television early in her career — a move that has paid off in spades. With a few small performances under her belt, Herrold landed the lead in the HBO finance series Industry about young graduates breaking into the prestigious London bank Pierpoint. Now with Bodies, she has her first major movie, a buzzy summertime release that not only features her as a principal character, but also a bloodied, knife-wielding murder suspect.

Herrold was drawn to the Bodies script — which follows a group of wealthy 20-something frenemies as their drug-fueled hurricane party unravels when one of them is found dead — out of pure intrigue. Mainly, she couldn’t tell what the hell it was after her first read-through. “I couldn't tell what genre it was when I read it. Every five pages I would be like, ‘Is this a drama? Is it a comedy? Is it a horror? What is this? What is this?’” she says. “And after I was done, I literally was like, ‘What did I just go through? What did I read? It was so strange and weird.’ And I went back and was like, ‘Oh, there's all these relationships.’”

Herrold was already a fan of Bodies screenplay writer Sarah DeLappe — especially her background in theater. (DeLappe is a Pulitzer Prize finalist in drama for her 2017 play The Wolves.) With its 13-page-long scenes, typically unheard of in TV and film, Bodies felt reminiscent of a play. And for Herrold, the idea that she could be engaged in an on-camera scene with that many people for that long was a thrilling prospect. “We would do single takes, all 13 pages at a time, 20 minutes at a time and it's exhausting,” she says. “But it really allows you to just be entirely in it.”

While Bodies Bodies Bodies reams the co-option of therapy language — everyone is “silencing” one another when they’re not busy “gaslighting” — Industry has Herrold extolling about the benefits of shorting stocks, bull markets, and other financial jargon that make the rich richer.

Industry is the multi-million-dollar power plays of Succession meets the sucking, fucking, and snorting of Euphoria, and Season 2 picks up in the post-COVID landscape of a total loss of control. Herrold’s character, the sharp, gifted Black American trader Harper, is hot off her Machiavellian streak, which leads to the firing of a female manager and effectively zero allies.

Does Herrold understand the stock market phrases she barks across the trading floor? Not really. Does it matter? Not at all. “I don't do my own finances because I don't want to go to jail,” she laughs. “The real doing of the thing I leave to the experts.”

Industry and its enormous, shifting sums of money are only the surface of the show; it’s all about the power dynamics that take place while navigating maniacal egos at work, getting down in the bedroom, or snorting lines of ketamine. Although for the latter two, the behind-the-scenes insights are all the more sobering.

“The stuff that they use to simulate a powdered drug is powdered lactate on our set. So it's powdered milk and we have to do multiple takes,” explains Herrold. “It's usually just a pain in the ass because between blowing your nose like crazy, usually drugs involve sex in the same scene. You're blowing this powdered milk out of your nose and then being like, ‘Sorry, I have to put my tongue down your throat.’ And then they're like, ‘Cut! Actually, can you do it again?’”

With protocol and an intimacy coordinator for the show’s uninhibited and rather original sex scenes, Herrold knows what to expect, and while she’s not unfazed, she understands that it’s simply another day on set. “I'm in no way desensitized to it because it's still intimacy,” she says. “It's still my body that is about to be on display for literally everyone to see and judge and comment on. I don't think any of that ever really goes away.”

Watching the episodes as they air, however, is another story entirely. “I’m always like, ‘Oh, my God. I forgot I was there and it's me and I did it!’” she laughs. “My poor mom as well, because all of her friends and her clients are like, ‘Is Myha’la in this thing?’ And she’s like, ‘Yeah, you can watch it if you want, but just know that this is going to happen.’ It's weird, but comes with the territory.”

A majority of Season 2 has Harper focusing on a new prize: a whale of a billionaire client who rivals her own sense of chaos, Jesse Bloom, played by Jay Duplass. “He wants someone who can say, ‘I know for certain,’” Harper explains to her colleagues, masking her unease with a cool and collected focus. And therein lies the overlap between Herrold and her character; they both back themselves all the way, no matter what, because there’s no alternative.

“That's sort of the crux of who we are as young Black women starting out in the industry,” she says. “You have to let other people know that you didn't come to play because if you show them any ounce of insecurity, they're going to assume already like, ‘Oh no, we can't trust that.’ I think both Harper and myself, we show up to the table like, ‘I got this and here's what you're going to want from me because I'm the best person for the job.’ And some of it is maybe bullshit and some of it is true, but you have to approach it that way. And then let people ask questions later.”

Both Herrold and Harper have moxie, that sense of reckless abandon necessary for going after what they want and knowing they can get it. The difference is, of course, in the execution. Herrold believes in the inherent goodness of people, and the power of kindness, honest work, and integrity; Harper, on the other hand, has no qualms with lying, scheming, and remaining in her own silo if it means achieving her ends. “I​f I'm on my own shoulders as the angel and the devil, I'm the angel and Harper's the devil,” jokes Herrold. “They're the same, but different.”

Herrold credits her mother for her moral compass, bravery, and fierce confidence. As an only child growing up in San Jose, California, the mother-daughter dynamic doubled as a best friendship. She describes her mother as “unshakingly supportive,” the type to never encourage a Plan B in her daughter because she knew that she only delivered the best.

“From day one, no matter what it was I wanted to do, she was always like, ‘Absolutely, you can do it. Whatever you want to do, you can do.’” And with that type of ingrained support, imposter syndrome barely has a leg to stand on. “I take a bit of advice that my mom's always told me. She's like, ‘You're that bitch. You're there for a reason.’ I have to remind myself I didn't weasel my way in here. Somebody asked me to do this because they knew that I was capable of doing it and I have something to offer here.”

At the end of Season 2’s climax, Harper’s ex-boss asks an existential question to a nearly empty pub. “Isn’t it lucky no one’s ever satisfied?” he says, his face lit up with bewilderment. Herrold doesn’t necessarily disagree. “Satisfied kind of has a finite ring to it for me. Satisfaction, I think, lends itself to like, ‘I'm good now. That's enough. I'm done,’” she muses. “I don't know, life is too interesting to be satisfied.”