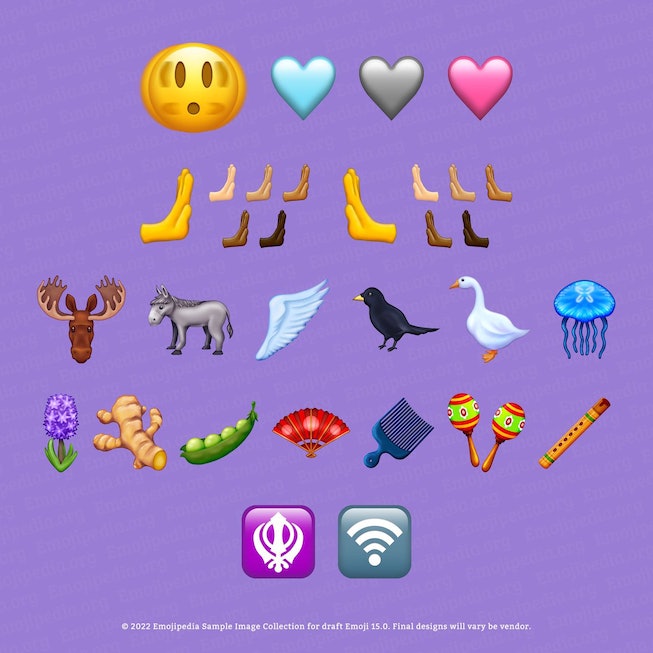 Every year, the good people at Emojipedia bless us with a new crop of emojis to add a little pizazz to our already overstimulated online lives. The group released its much-anticipated list on Wednesday. Though the list is only a draft, all recommendations typically make it through.

The latest set of emoji feature such gems as a hyacinth in full bloom, a majestic moose head, a gorgeous goose, an exquisite jellyfish, a finger of ginger, a hair pick, maracas, and a donkey. It also includes a long-awaited pink heart (and a blue heart... notably, the colors of bisexual lighting.) Most crucially, it includes a hand signaling stop. The 2000s really are back: Never has it been so easy to tell someone to “talk to the hand.” (Note: other news outlets are calling this a “high-five.” I guess that makes sense.)

My personal favorite is the shaking face emoji, which could just as easily convey someone at the crux of a drug trip as the feeling of being stuck in a motion blur, not dissimilar, as one brilliant Twitter user put it, to the meme of the world spiraling around Mr. Krabs — a feeling that I don’t think can encompass our current ennui more accurately.

This year’s list only includes an additional 31 emojis, the smallest recommendation yet. Last year’s draft list contained 112 recommendations, while 2020's two draft lists included 334 emoji between them. And for the first time ever, there are no new people emojis in this batch of recommendations, but it’s worth noting that the last two years have been mostly people.

The new emojis will be confirmed in September and will likely roll out in 2022 and 2023, so unfortunately you’ll have to wait a little longer to tell someone to talk to the hand. In the meantime, you can vote for your most-anticipated emoji for the 2022 World Emoji Awards, an annual celebration of emoji. (As if every day isn’t!)