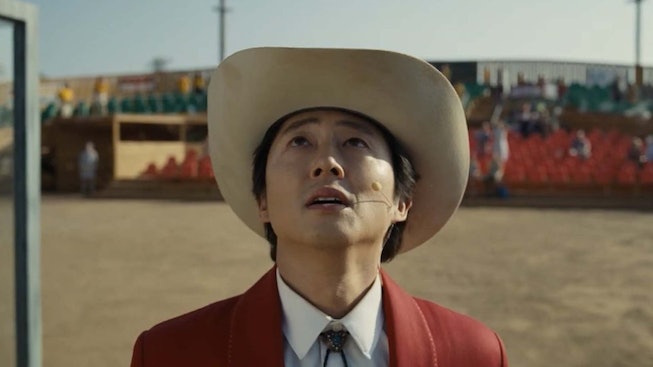 Since the release of Get Out in 2017, the world has been in a perpetual state of waiting for more from Jordan Peele. In 2019, we got Us, the very scary horror film about a sect of evil clones who live underground (a gross oversimplification), while Get Out has remained in the zeitgeist, most hilariously in the form of memes that surface every time a white Democrat wears a Kente cloth. Now, we’re getting the first look at Peele’s third feature Nope.

Peele once tweeted that Get Out is a documentary, and later tweeted that Us is a horror film. It’s not clear yet what Nope is, but on February 8 we got the first look in a teaser video teasing the full trailer release on Super Bowl Sunday. Cool, a trailer for a trailer. Got it. At least it’s not another reboot. (Or Peele’s lackluster take on The Twilight Zone.)

The trailer mostly shows iconic scenes from Get Out and Us with the spooky version of Luniz’s “I Got 5 On It” used in Us, with the text: This Sunday, discover what’s next from the mind of Jordan Peele.” Fingers crossed that if you watch the Superbowl just to see this trailer, you’ll get more than a split-second still. Nope is set to be released in theaters on July 22. See everything we know so far about the film so far, below.

Daniel Kaluuya is back

Get Out was Daniel Kaluuya’s breakout role, leading the actor to starring roles in films like Black Panther and Judas and the Black Messiah. Now, Kaluuya is back in the Peele universe for Nope. The film also stars Steven Yeun of The Walking Dead and Minari, Barbie Ferreira and Keke Palmer, who is going to be voicing a new character in The Proud Family movie out later this year, which is maybe the only reboot worth getting behind anymore.

The evil force might be coming from the sky

In the very brief few shots we see in the teaser trailer, it appears that the force of evil is coming from the sky, with shots of characters with their eyes and heads turned slightly upwards, looking terrified. The film’s poster shows a large black cloud ominously placed over a city. Could it be aliens? Has anyone told Demi Lovato?

Peele is teaming up with cinematographer Hoyte van Hoytema, who shot Interstellar, Dunkirk and Tenet. It’s also been reported that Nope was partially shot on film for IMAX. Both of these facts support our hypothesis that aliens may or may not be involved.

A final trailer reveals the evil force at work

An extended trailer released on June 9 finally gives us a clue about the plot, of which little has been revealed thus far. In Peele’s latest, the evil force isn’t body-snatching white liberals or alternate versions of ourselves living in an underground society — but aliens. It appears that Keke Palmer and Daniel Kaluuya are the duo behind a horse training ranch for Hollywood productions that aliens keep flying over. Naturally, they hatch a scheme to capture and sell footage of the UFOs, but you can probably guess that the aliens don’t like that!

You can watch the full trailer, below.