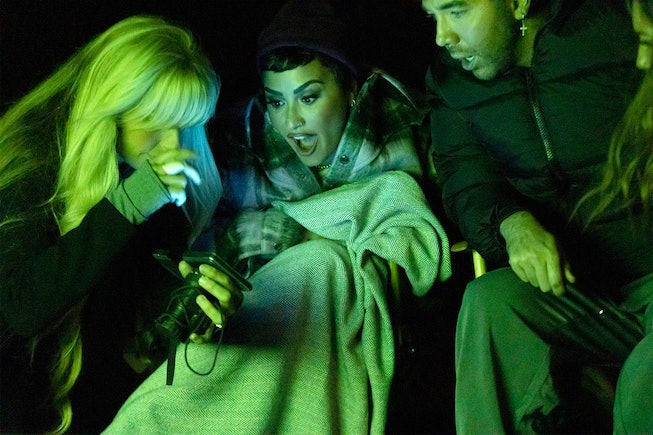 Unidentified with Demi Lovato opens with Demi Lovato describing how they saw a UFO in Joshua Tree a few years ago. It’s a simple enough story. Demi describes seeing some kind of orb in the sky with blue flashes of light. Of course, it’s easy to be skeptical. Was Demi tripping on peyote at Joshua Tree when they thought they saw a UFO? Maybe. But does the U.S. have a massive file on UFOs? Yes. As Demi reminds us: “Pentagon!”

Their best friend Matthew Scott and sister Dallas aren’t fully on board at first, chocking the story up to a dream. The trio decide to embark on a “research trip,” riding around in a camper talking to alien experts and “gaining insights on the UFO phenomenon” over four 45-minute episodes. Demi, full of hope, believes these beings are here to save the world and to bring us together.

But sixteen minutes into the first episode of Unidentified with Demi Lovato, things take a turn. Demi becomes convinced they didn’t just see a UFO, but they were actually abducted by aliens, or extraterrestrials. (Lovato says “aliens” is an offensive term and we should refer to them as ETs.) What starts out as a Ghost Hunters premise, with no shortage of night vision shots, quickly turns into some warped trauma talk show, where Demi takes it upon themselves to exorcise the trauma of abductees, themself, and ghosts who have seen aliens (more on this later.)

Demi starts to realize they may have been abducted after they interview an abductee named Geraldine, who describes how she became pregnant at 16 without ever being sexually active. Doctors said she had a ton of ovarian cysts and scarring of the womb that was consistent with someone who had had multiple miscarriages. Demi, too, had ovarian cysts at an early age, they note, before sharing: “I’m starting to think it wasn’t an astral projection that I had. That maybe, I had an abduction situation as well.” As they do throughout most of the show, Matthew Scott and Dallas look at Demi with wide eyes and open mouths, and we cut to commercial.

This is when things really go off the rails. Geraldine then describes how she’d became pregnant and had miscarriages when she wasn’t partnered. Eventually, she says, aliens took her out of her bed, aboard an aircraft, and introduced her to her “hybrid children,” which she describes as having grey skin. She then shows Demi her paintings of her 24 hybrid children, while Demi and the crew look on with tears in their eyes. Demi expresses some disbelief in a confessional shot to the camera — but says they aren’t one to talk. “I have to honor that truth just as the people around me have honored mine,” they say.

Demi continues their roles as the ghost trauma whisperer, asking a ghost if she’s ever seen an alien, using a “ghost-hunting tool” that detects EMF, or electromagnetic fields. Demi discovers that the ghost doesn’t want to talk until the men leave the room. “She has trauma,” Demi says, “And that’s why she doesn’t like men.” “Okay I respect that, I respect that,” says Scott. Demi then tells the ghost they have trauma, too, and and then asks if the ghost likes to sing. The EMF meter lights up and Demi starts singing an a capella rendition of “Skyscraper,” to which the EMF meter goes wild, in what is the most bananas two minutes I’ve seen on television since Kendall Roy’s surprise rap in Succession Season 2.

For all the visceral cringe the show induces, there’s something really vulnerable about it that’s kind of beautiful: Demi has long been the patron saint of weirdos, and in Unidentified, it feels like they’ve finally found their kindred spirits. Even more than they believe in ETs, Demi believes that rogue UFO experts, alien abductees, and ghosts with trauma deserve to feel heard, seen, and understood. I think generally we all just want Demi to be okay, and in Unidentified, they give themselves the validation the world won’t.

Later, Demi attends an alien abductee support group, where people talking about having contact with aliens who visited their cribs as babies, or who have had multiple miscarriages whose fetuses were taken by aliens. “There was absolutely no judgement and I loved that,” Demi says. “I’ll take that over people judging one another any day.”

The leader of the support group then performs a hypnotherapy regression session on Demi in a scene that features my favorite exchange in the show: “Demi has an electromagnetic headband on and Dallas and I are on the side literally watching Demi’s brain,” says Scott. “That’s Demi’s brain,” says Dallas, pointing to the computer screen with wonder.

Demi reveals that they saw three beings who asked if they wanted to join them, to which they responded, “yes.” Demi shared that the aliens took them to their planet where there was pink and purple gasses and the smell of lavender. “They’re around,” Demi says. “They watch. They protect.” The hypotherapist then asks what the aliens protect Demi from. They pause before answering: “Myself.”

Unidentified with Demi Lovato is now streaming on Peacock.