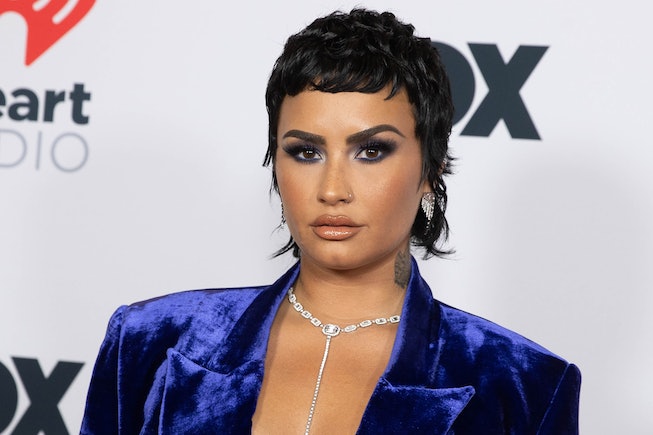 Demi Lovato continues to be one of Hollywood’s most reliable wild cards. This time, they’re defending the nomenclature rights of extraterrestrials. Lovato’s latest project in our Elon Musk era is a new, four-episode series that “searches for the truth about the UFO phenomena,” they told PEDESTRIAN.tv. Unidentified with Demi Lovato, where Lovato takes us, their best friend Matt, and their sister Dallas on a road trip to meet alien experts and search for answers about UFOs, is streaming on Peacock now. With plenty of night vision cameras and pseudo-seance encounters where Lovato diagnoses the trauma of ET lifeforms, it might be spooky season’s dark horse watch.

In their interview with PEDESTRIAN.tv, Lovato laid their stake as a staunch defender of the dignity of aliens, saying: “We have to stop calling them ‘aliens’ because ‘aliens’ is a derogatory term for anything. That’s why I like to call them ETs.”

Lovato’s motives are rooted in something good. It’s true that calling someone who’s undocumented an “illegal alien” has been Fox News-brand dehumanization 101 for years. And in Biden’s immigration reform bill last month, he proposed replacing the word “alien” with “noncitizen” in U.S. immigration laws after activists, for years, have said it’s dehumanizing. But it’s unclear whether aliens — um, ETs — have any sense of what is or isn’t derogatory, especially because it’s unlikely they speak English.

Anyway, Lovato went on to tell PEDESTRIAN.tv that they’ve been an ET their whole lives. “And I just thought, you know, I’m in a position in my career right now where I’m dipping my toes into a lot of different waters. And this was just kind of a natural next step,” they said. “I wanted to film everything that goes down when I go and search for these UFOs so that my fans can come along for the ride.”

Lovato went on to say that ETs don’t have malicious intentions, that if they wanted to harm us, they would have done it already. “I also think that if there are civilizations that are of consciousness in other dimensions, which has given them the technology to be able to travel through space, I think that they are looking for nothing but peaceful encounters and interactions,” they said. “If they wanted us gone, we would have been gone a long time ago!”

Lovato’s linguistic theories have mildly rattled the scientific community. Astrophysicist Neil deGrasse Tyson responded to Lovato’s claims, saying that extraterrestrials “have no feelings.” He said that Lovato was being “considerate” but insisted that humans don’t know what “is going on in the head of species of life from another planet.”

Tyson continued: “When I refer to aliens — just to be specific — I always say ‘space aliens’. And then, what we used to call aliens on Earth — undocumented immigrants, that’s what the new term is for them, and I’m all in on that. … So what that means is — if we all do that — the only invocation of the word ‘alien’ is for creatures from outer space that want to kill us all.”

But has he ever helped heal the trauma of the supernatural simply by singing? Didn’t think so! Until we know for sure, we better not offend any other life form in the universe in the meantime. Watch the trailer for Unidentified with Demi Lovato, below.