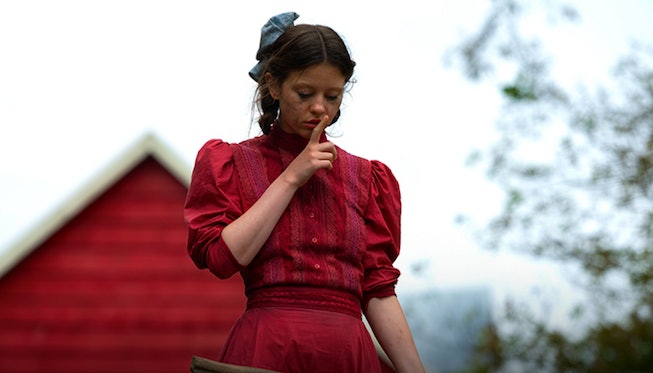 Pearl, A24’s latest offering, is a depraved Little House on the Prairie, told in boldly colored sequences that could as easily be bespoke, slasher GQ photoshoots, where Mia Goth gives a performance as demented as it is endearing, revealing the genesis of how a serial killer became a serial killer. It is the prequel to the horror film X, following its titular character as a young woman growing up in war-torn Spanish flu-era South with her cold German mother and invalid father, where people are hacking up lungs in movie theaters and you have to wear a mask to talk to anyone outside your family. Pearl’s husband is at war, and she passes the time by dreaming of a showgirl life on the big screen, masterbating atop a local scarecrow, decorating her table with a maggot-infested suckling pig, and continuing her education as a serial killer by feeding animals to a hungry alligator living in a swamp on the grounds. The claustrophobic setting of the farm, with its abandoned bunkhouse and ghastly root cellar, will be familiar to viewers of X, which is set in the 1970s and follows a group of amateur pornographers who are murdered while shooting a film on the farm by its old woman proprioter: an octogenarian Pearl, also played by an unrecognizable Goth.

Pearl is a compelling antihero, sexually and intellectually repressed, enfantalized by her mother, claustrophobic, aware of her own potential as much as her own trappings. Her only respite is trips to town to buy her father morphine, which she guzzles while sneaking into the movie theater. She is prone to angry outbursts and terrifying near-acts of violence; she’s not above wheeling her father to the edge of the dock to feed him to the alligator, only to be stopped by her mother. It’s not until Pearl’s mother accidentally catches on fire that we see how deeply off she is. Her response? Not to help, but to kick her down the stairs.

But it’s later that Pearl hits her breaking point, after she gives it her all at a dance audition she thinks will be her ticket out of town, only to have her “blonder, younger,” sister-in-law cast instead.

“Pearl is a very ambitious young woman. And really, I think that's where the brunt of her frustration is coming from. Because she believes in herself more than anyone else in the world, and no one ever really sees it,” Goth says to NYLON. “That conflict is where a lot of her frustration comes from because she's just so limited and stifled by the environment that she's in, the time that she was born into.”

Goth and West wrote the script for Pearl in two weeks while quarantining in hotel rooms before traveling to New Zealand to film X. Creativity is often born of restraint, and in the case of Pearl, it was also born out of economics. West figured he could convince A24 to let him use the set for Pearl to make two films, since they were going to be down there anyway.

“It was such a long shot. It was so unlikely. We just always said to each other, ‘Well, worst case scenario, it's two weeks of wasted time, and we'll at least get to use this as backstory for the character, and it'll be very informed, and X will be better for it,’” West said. “That was the coping mechanism if it didn't happen – and now here we are talking to you about the movie we ended up making.”

Pearl is out now.

What is the genesis of Pearl? At what point did you know you wanted to make this? Was it always part of the X universe?

Ti West: It was not always part of it. X was a script I had written and we had put together and cast Mia. We were heading down to New Zealand to make X because it was at peak COVID, and you could safely make a movie in New Zealand. We had spent a lot of effort sorting out New Zealand and getting a crew and sending people down there and getting visas. We were spending a lot of time and effort and money building a barn and a bunkhouse and all this stuff to make this movie. Years prior, I had made a movie called The Sacrament, where we built a compound where a cult lived. We built all these little homes, and we had 150 extras there, milling about all the time. It was a real community that we had basically created and spent over a month in. When we wrapped that movie, you just tear all that down, and it goes in the dumpster, and you go home. It's such a weird feeling, and I'd never experienced it to the degree that I had like when I was on that movie. Anyway, here we are, doing something similar in New Zealand, at a time that was very uncertain for movies, and really, everything in general. It seemed to me that if we're going to this place to do this and we're so lucky to be the ones that can do this, we should try to make two movies and just stay there and do that. I didn't have an idea for a second movie, and a sequel to X using all the same stuff didn't make sense: more people going to a farm and getting killed, wasn't much of a movie there. What started to make sense was going backwards and telling a story about Pearl who was one of the more interesting characters in X, but when she was younger, because we don't meet Pearl until late in her life in X, and we don't meet her until late in the movie anyway.

Mia, that's really a unique experience as an actor to get to play these roles that have so much meat in their backstories. Did one help inform the other in your performances?

Mia Goth: It was a very unique experience, and that certainly wasn't lost on me. The prep that I did for Maxine informed older Pearl, which also informed younger Pearl. And so everything that I did for one character informed all the other characters that I was playing. The amount of prep and backstory that I was able to create for these three women ended up being very rich, and I had a lot to pull from.

I'm so interested in the sexual repression of younger Pearl, which is very well done. Do you think that's really where the brunt of her anger comes from?

Goth: I wouldn't say the majority of it. I would definitely agree that it's a contributing factor to the aggression that she has. Pearl is a very ambitious young woman. And really, I think that's where the brunt of her frustration is coming from. Because she believes in herself more than anyone else in the world, and she's really able to see her potential. No one ever really sees it. But she knows. And that conflict is where a lot of her frustration comes from because she's just so limited and stifled by the environment that she's in, the time that she was born into. There's just so many things that are blocking her from blossoming into who she could have become.

That feeling of being stuck really comes through because it feels like she's so developmentally stunted. And in other ways, she's very mature because she's seen so much darkness, too. She's living through a war. What was it like to strike that balance to her innocence and all of the darkness she's experienced and seen?

Goth: I wouldn't call Pearl so much as innocent as I would say she's more naive in everything. It was a joy really to be able to play someone who's so complex and not just one-note and is, really, perfectly imperfect and just very much a living, breathing, dynamic human being. I thought she was very relatable and could understand very well how on some days she could be a lot more pleasant, and on other days she's dealing with a lot of repressed emotions. I think that's how we're all built, really.

What is the breaking point? What is the last strike that makes her start killing people?

West: I think an accident sets it in motion. And then I think, once it's in motion, it's a no-turning-back kind of thing. I think getting to the point of the audition and getting to the point of doing as best you can, only to be rejected, then that holds a mirror up to all the things you're doing. And that no plan B that she had is now suddenly thrown back at her. I think that's, in many ways, probably her biggest breaking point.

Mia Goth: Yeah, I think her at the dance audition and being told no is really the breaking point of the movie. Because yes, she's going around killing some people. But really, at that audition, that's where she dies in a way. A big part of her dies and along with her dreams and own hopes that she had for herself. And so really, that's what she's grappling with once she leaves that audition.

There's so many gorgeous, grotesque, and wonderful shots in this film. Do you have any favorites or ones that are particularly compelling for you?

West: Any stuff with the pig is pretty great. At the table with the pig, it was pretty gross to film. The maggots were everywhere. That was very memorable, watching everyone running around trying to pick up maggots off the table.

Goth: I think Ti did such a beautiful job. Him and Eliot Rockett, our DP, I think they created such a sumptuous world. Really every single scene, it's just been crafted in such a beautiful way. One that really sticks out with me is the whole scarecrow sequence. It's just like a painting.